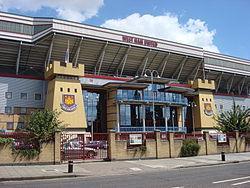 West Ham football club is to sell its historic home ground to London developer Galliard Group in a move that will see the Boleyn Ground turned into a housing development.

In a statement today the premier league side said it had selected Galliard Group as the buyer of its home ground, once the club completes its move to the Olympic Stadium in 2016.

Galliard plans to build hundreds of new homes on the site, as well as retail and leisure facilities, with the proposals also including a new central landscaped garden, which would be named the Bobby Moore Memorial Garden.

West Ham United vice-chairman Karren Brady said: “We opted to reach an agreement with Galliard because they are a local London developer and employer with origins in east London.

“The deal demonstrates that we have been true to our word by securing the regeneration of two areas of east London through our move to the Olympic Stadium in 2016.”

“Working closely with West Ham and Newham council, Galliard now plan to undertake extensive consultation with local residents and businesses and the West Ham United Supporter Advisory Board in order to create a future for the site, which is respectful of the cultural and economic diversity of the local area.”

Under proposals also being considered, fans and local residents would be invited to enter a poll to name each building after a legendary player or an historic event at the Club.

Galliard have commissioned sculptress, Frances Siegelman, to create a statue of Bobby Moore and other artwork celebrating the heritage of the Football Club, which would be located in the gardens and grounds of the new village.

Under the plans, the current West Ham memorial garden by the front entrance to the grounds would also be retained, protected and incorporated into the new development.

The new village, which will have a construction programme of some 30 months, has an anticipated completion date of late 2018.