Westminster Council has approved a new design for the Chelsea Barracks site in West London two years after an intervention by the Prince of Wales scuppered previous plans.

The 13-acre site will be turned into 448 houses and flats, a sports centre, shops and health centre.

In 2009 the developers Qatari Diar withdrew the original Richard Rogers plan (pictured) after Prince Charles wrote to the Prime Minister of Qatar expressing his displeasure with the modernist design.

Qatari Diar’s withdrawal led to a legal battle with then partners CPC group, the Candy brothers’ development arm, to recoup £81m, but the High Court bid to recoup the money failed.

The architects for the new plans are Dixon Jones, Squire and Partners and Kim Wilkie.

Councillor Alastair Moss, chairman of the council’s planning and city development committee, said: ”Chelsea Barracks is the most significant residential development we have seen in Westminster in recent years.

”It is a world class site, in a historic part of the capital and it is vital that its redevelopment helps improve the area.

”We should be proud of this scheme and the huge amount of effort put into it by all parties. The master plan has widespread support among local residents, community groups and businesses. 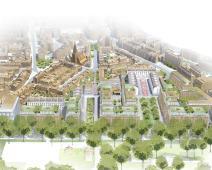