Berkeley subsidiary St James has been given the green light for a 527-home development in White City.

Designed by architect Pilbrow and Partners, the west London scheme will include a pair of 22-storey and 32-storey towers built directly behind White City tube station and follows nearly two years of consultation with Hammersmith and Fulham council. 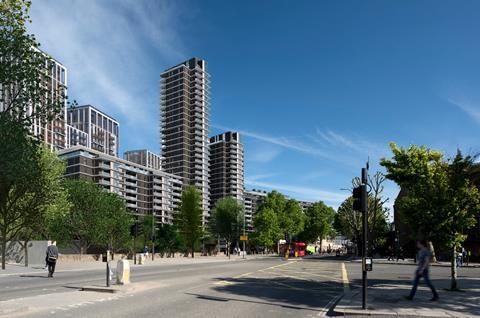 The tallest tower will be 32 storeys

The developer said it will act as a gateway to Imperial College London’s White City campus and will provide the college with 10,000sq ft of commercial space and a 35% provision of affordable housing for college staff and other key workers.

The scheme is the next phase of the ongoing White City Living development, a 2,300-home regeneration project.

The wider masterplan for White City Living includes a park linked to nearby Wood Lane by a series of bridges.

St James said the landscaping for the park has been inspired by the Japan-British Exhibition held in White City in 1910.