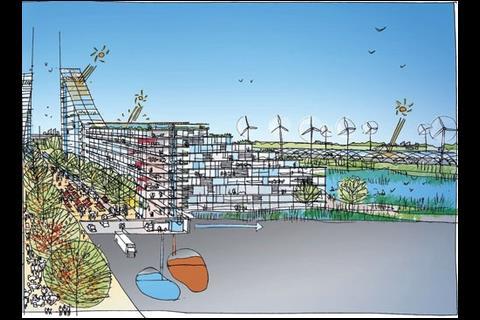 Energy labelling of existing dwellings becomes compulsory at the beginning of this June, well before non dwellings which takes effect in 2008. The government has just announced it will make energy labelling compulsory for new dwellings from this October. This scheme would almost certainly get an A rating. Designed by architect Foster + Partners with engineer Fulcrum Consulting and infrastructure engineer KBR the concept is called Zed Squared as it is a zero carbon and zero waste community. 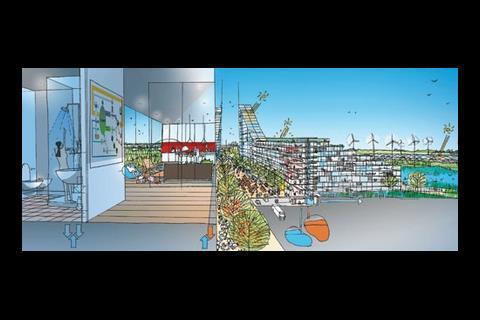 Zed Squared will provide homes and employment facilities for up to 5,000 people and retail, education and healthcare facilities would also be provided nearby. Developer Bioregional Quintain is working in partnership with WWF to find a suitable site in the Thames Gateway to build the scheme.

The government has just announced details of the Energy Performance of Buildings Directive. Nick Cullen of Hoare Lea and Simon Rawlinson of Davis Langdon analyse what effect it will have on buildings in the real world

As the Energy Performance of Buildings Directive (EPBD) begins to be implemented in the UK this year, our property industry will enter a process of market transformation. Through home information packs and energy performance certificates, the EPBD aims to influence the attitudes of developers and occupiers to the carbon efficiency of buildings.

A crucial step towards large-scale reductions in carbon emissions is a means of valuing sustainability that is broader than the trade price of carbon credits. A higher value should be derived from a preference for occupying and investing in low-energy, low-carbon buildings. The EPBD aims to do this by labelling buildings according to their energy efficiency and, as such, encouraging occupiers and developers to value buildings with high grades.

Cluttons, Davis Langdon and Hoare Lea carried out research into how labelling can be used to motivate change. With the findings, we have:

Evidence from the energy labelling of domestic appliances and lamps demonstrates how effective the approach can be in changing the behaviour of producers and consumers. When labelling of domestic appliances was introduced in 1993, only 2% of the EU market for refrigerators met the A standard. By 2003, 75% of appliances met the A grade, with a group focusing on a sub-market of A+ and A++ products. In contrast, for a wide number of reasons, the public have been slower to adopt low-carbon cars.

But will labels motivate building occupiers and investors, who are already burdened with high-carbon buildings, to change their investment strategies and letting behaviour?

We believe that some organisations will be sufficiently motivated by their own corporate responsibility agenda to adopt the labels. However, the majority of will respond indirectly to signals generated by the labels, such as market value and brand sentiment. There is evidence that the imminent arrival of labelling is already encouraging portfolio managers to benchmark their buildings and to develop up-labelling strategies.

In absence of a defined labelling scheme we have designed this analysis to identify the work and costs required to achieve a reduction in carbon emissions of 25% and 50%. These levels were proposed because future revisions of Part L are expected to demand a reduction of 25%. On this bases, a 50% reduction would be considered a significant improvement in performance.

The analysis was based on a notional 11,250m2 West End office building based on a 15m deep floorplate, arranged around a single atrium. The building is designed to be compliant with Part L 2006, using London city-centre best practice for an air-conditioned building.

The model was developed using IES software and capital costs were based on Davis Langdon’s cost models in Building magazine. In addition to modelling a number of carbon reduction initiatives, we also examined the effect of changes to the proportion of glazing in the facade and that of different cooling systems.

Six scenarios were modelled, of which four are considered in this article. The six are based on three different facade transparencies and either a fan-coil or chilled-beam climate control system.

Each case was analysed to evaluate the impact of 18 different carbon reduction strategies.

A cumulative comparison of the six models is given in figure 1. Current standards enable commercial offices to comply with Part L 2006 with little or no additional measures. For a 25% reduction in emissions from the Part L baseline (40kg), carbon savings of over 10kg of CO2 saved per m2 per year are required. Similarly, an aggregate saving of more than 20kg must be secured to achieve a 50% reduction.

The strategies adopted in our assessment are shown in table 2. The carbon reduction achieved by each measure was calculated and then ranked in order of cost-effectiveness, based on kg of CO2 saved/m2/year/£ (table 3).

The tabular analysis, which summaries the individual contribution of each measure indicates that significant reductions can be made using existing technologies such as lighting control or static cooling, while retaining air-conditioning. Furthermore, the cost of these, including contractors’ costs, is likely to be no more than a 5% more than overall capital costs.

The results also reveal that the most cost-effective measures are simple and easy to implement, or are already part of industry best practice.

However, in reviewing the measures to reduce emissions, we also need to consider the effect of diminishing returns. As initiatives are implemented and the pool of residual carbon becomes smaller, each kilogram of saving will become harder to achieve.

The study found that the lowest carbon emissions could be achieved with the chilled beam and 40% glazing combination, reducing overall emissions to 20.85kg of CO2/m2/annum, from 40kg in the 40% glazing notional building. This falls short of the 50% reduction target by just over 1kg. In contrast, a fan-coil-based variant with 100% glazing can exceed the 25% reduction target (28.8kg of CO2/m2/annum, as opposed to 43kg in the notional building), but is nowhere near the 50% target.

Before concluding that reducing the carbon footprints of offices is within our grasp, we must reflect on the constraints on the implementation of reduction strategies, such as:

As the level of carbon savings aimed for becomes higher, can market forces motivate further improvement? How the value of carbon efficiency will be reflected in rents paid and returns secured will become more acute, particularly for naturally cooled and ventilated office buildings which will get a good label, but which generally secure lower rents and capital values.

What is the value of carbon saved and is there motivation for change?

Our work on the scope and aggregate cost of carbon reduction initiatives has indicated that a substantial reduction in carbon emissions, over the 25% cut anticipated by Part L in 2011, is achievable without recourse to a major change in office design or technology. We estimate that the costs associated with these changes is in the range of 3-5% extra, depending on the specification and cost of the base building.

At the moment, low carbon buildings have no established premium value in the market, but development appraisals suggest the following changes would be sufficient to offset the additional capital cost to the developer:

With sustainability at the top of many occupiers’ agendas, and the establishment of investment funds to purchase green developments, which are currently in short supply, there is little doubt that premium rents and capital values associated with low energy and low emission buildings are within reach.

This assessment obviously excludes benefits to the occupier, secured through lower operating costs, and in the future, potentially, tradable carbon credits. Based on the building model, energy consumption benchmarks and current energy and carbon prices, we have assessed the present value of these savings in table 4 overleaf.

The energy savings are equivalent to £0.95/ft2 net/year for a 25% reduction, and £1.90/ft2 net/year for 50% reduction. These savings alone could offset the rent premium associated with increased capital cost, although they will not cover the “green premium” to rents that could in future be dictated by the market. The occupational carbon values, based on the current price for carbon illustrates just how expensive carbon credits will have to be to become an effective lever. Even at the peak price recorded to far of *14/tonne, the value of the 50% saving would be about £60,000 – scarcely a significant motivator for change.

Although future carbon credit schemes are likely to be more stringent than those we have at present, this evidence suggests that carbon credits alone are too small a monetary lever to drive change. That said, the cost of carbon as set by the market indicates that at present there are more cost-effective means of driving carbon out of the economy than through the building stock. Once the EU’s caps on the industry are more realistic we will see a rise in the price of carbon credits, allowing them to be properly priced into investment decisions.

From this assessment, which excludes non-monetary benefits, we can conclude that, at current energy and carbon prices, savings to the occupier of reducing carbon are insufficient to justify the rental premium. The parallel with the car market is striking. Here, the strength of the carbon reduction agenda with sapped by the limited monetary penalties associated with vehicle excise duty and company car tax, and a wide range of counter-motivators, including performance, prestige and the driving experience.

As we approach the announcement of the detailed scheme for energy labelling, one of the issues that our analysis raises is, what type of label will motivate the market transformation needed to finance building performance improvement? Our view, based on the results of this assessment, is a scheme that achieves the following:

The building energy labelling scheme will be a challenge for the property industry, as it will increase public awareness about the carbon performance of the UK’s building stock. It is a short step from labelling to legally binding operational emissions targets, so one way or another, we must reduce the carbon impacts of our buildings.

It is preferable for this to be driven by market demand, with occupiers getting the buildings that they want, rather than regulations, leading to buildings that do not support occupiers’ businesses.

For the labelling system to succeed, the market must see the benefits of low carbon buildings and be able to relate greater value to a better label. Only then will the market respond and begin to demand low carbon buildings, and the property industry’s infamous “circle of blame” will be broken. Let’s hope that labels do for buildings what they did for fridges rather than what they haven’t achieved with cars.

Energy labelling of existing dwellings becomes compulsory at the beginning of this June, well before non dwellings which takes effect in 2008. The government has just announced it will make energy labelling compulsory for new dwellings from this October. This scheme would almost certainly get an A rating. Designed by architect Foster + Partners with engineer Fulcrum Consulting and infrastructure engineer KBR the concept is called Zed Squared as it is a zero carbon and zero waste community.

Zed Squared will provide homes and employment facilities for up to 5,000 people and retail, education and healthcare facilities would also be provided nearby. Developer Bioregional Quintain is working in partnership with WWF to find a suitable site in the Thames Gateway to build the scheme.