Scheme to be built on site of former Boddingtons brewery

Willmott Dixon has lined up a £54m contract to build a new campus for Manchester College on the site of the former Boddingtons brewery.

Located opposite the Manchester Arena and Victoria station, it will house learning space for creative industries including film, recording and photography studios, editing suites and two theatres. 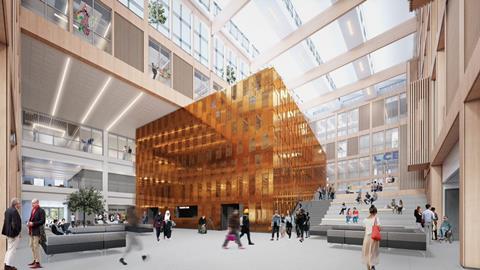 The four-storey building has been designed for LTE Group, the parent company of the college, by a team consisting of Bond Bryan and local practice Simpson Haugh.

Structural engineer Aecom and QS Pearson Fraser are also on the project team.

LTE Group purchased the plot from Deansgate Securities LLP, who own the wider Boddingtons Brewery site. Another part of the site is being converted by developer Prosperity Capital Partners into a 556-home residential scheme designed by Assael Architecture.

The new building, which Willmott Dixon says represents one of the largest investments in further education and skills in the region for more than 30 years, is due to be completed in time for the September 2022 intake of students.