Willmott Dixon to buy back Inspace 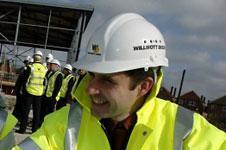 Willmott Dixon has announced its intention to buy back its demerged housing arm Inspace.

An indicative offer was tabled at 183p per share for the publicly-listed company.

Inspace said of the potential acquisition: “Discussions are at an advanced stage, there can be no certainty that an offer will be made.”

Inspace saw half-year pre-tax profits jump 47% to £5.4m in the six months to June of this year, while turnover more than doubled to £140m.

The announcement saw Inspace’s share price jump to a high of 167p, up from 109p at the beginning of the week.

Willmott Dixon would not comment on the potential acquisition.