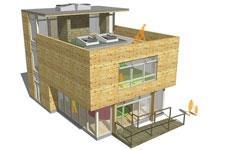 Willmott Dixon has been judged the greenest construction company in the UK according to the Sunday Times Green List.

Construction firms featured prominently in the list of 60 best green companies. A third of the top 30 companies were involved in construction.

Willmott Dixon was also judged the greenest company among those big to medium-sized firms with high environmental impact.