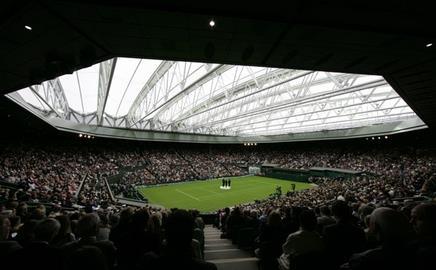 It must have been the first time the All England Lawn Tennis Club ever prayed for rain. But as if to prove (as if it needed proving) that the organisers of Wimbledon have no power over the weather, it remained blustery but dry. Fortunately, this allowed the BBC to stage the maiden public closure of Centre Court’s new roof on live television.

If Mike Bridges, Galliford Try’s construction director for Wimbledon, was nervous about the public attention on the new engineering marvel on Centre Court, he did not show it. Sitting down for a brief chat before the event kicked off, he cut a supremely relaxed figure. “The roof’s not an issue now,” he said. “We’ve opened and closed it many, many times. The challenge is to control heat and humidity in an arena full of 15,000 people.”

The Wimbledon event – or “celebration”, as the AELTC dubbed it – was not only a chance for the new roof to be shown off to a worldwide audience, it was also an opportunity for Galliford Try and its engineers to test a new environmental engineering system that would allow the famous grass on centre court to remain free of the condensation you might expect to build up in an enclosed space filled with thousands of people.

What if it didn’t work, we asked. Britain has a noble history of sporting failure, particularly when it comes to our venues. Wimbledon would not yet want to see faults on Centre Court. Bridges remained unshakeable. “Based on the design, it can’t not work,” he said, airily. “It would just take longer to regulate the temperature. But we’re confident that’s not going to happen.”

After Bridges had returned to his team of six engineers, the event kicked off. Andre Agassi, Kim Clijsters, Steffi Graf and Tim Henman came out to standing ovations from the crowd. But for once, the players were not the main attraction. After some preamble by perennial Wimbledon fixture Sue Barker, the unveiling began. Welsh songbird Katharine Jenkins and Britain’s Got Talent wonderteen Faryl Smith came out to sing Amazing Grace as the roof slowly began to unfold.

There were a couple of nervous whispers to begin with as the roof stopped momentarily, but it soon became clear that occasional pauses were just part of its operation. It was completely silent, free from the clanks and grinding you might expect from such a giant mechanised structure, and emerged as smoothly as a well-oiled trombone slide. Amazing grace indeed.

You could not, architecturally speaking, call the roof unobtrusive, but it has had to be designed as an add-on, rather than as a integral part of the structure. It is quite monumentally large, a marvel of construction in brilliant white that will be up there with Tower Bridge, the London Eye and the Thames Barrier on London tourists’ lists of engineering hotspots.

Once closed, the roof had its own burst of applause. It was not as rich an ovation as that afforded to the retired tennis players, but they had already traversed the world’s stage. The roof looks set to be as beneficial an asset for the Wimbledon championships as the Grand Slam winners themselves. After half an hour to regulate the atmospheric conditions, the court was pronounced fit for play.

While the tennis was not exactly sparkling, the atmosphere remained positive – in more ways than one, luckily for Galliford Try’s team. “Everybody was very happy with it,” says Bridges. “We got a lot of the data we needed, and it was actually very quick. The conditions were perfect.” No less an authority than Tim Henman vouchsafed afterwards that the playing surface remained fresh and bouncy, with no unwanted slipperiness due to condensation.

With bad weather taken out of the equation, the AELTC is going to have to find something else to pray for – a British victory in the championships will probably be first on the list. Bridges remains aloof when asked whether Andy Murray will be inspired enough by the roof to win his first Wimbledon this summer. “I’ve no idea,” he replied. “I’m not really a big fan of tennis.”