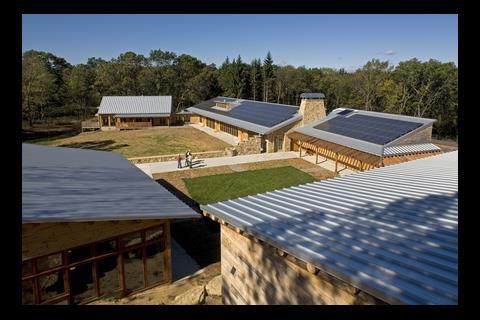 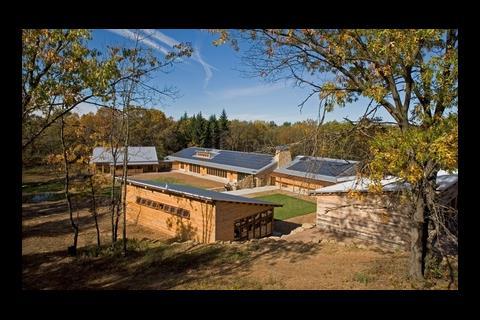 Towards a truly carbon neutral building.

Through renewable materials and energy, the Legacy Center in Wisconsin America is the first US project to be judged carbon neutral building by the LEED certification. With full building performance data

Built from reclaimed stone and timber felled and milled on site, the Aldo Leopold Legacy Center has received Platinum LEED Certification from the U.S. Green Building Council. It has been awarded the 61 points of a possible 69, more than any other LEED rated building in the world.

Over 90,000 board feet of timber was machined from local trees including some planted by Aldo Leopold in the 1940s to make beams, columns, trusses, internal and external timber cladding.

Clever use of logs left in the round to retain the strong sapwood has enabled smaller diameter timbers to be utilised where normally they would be deemed substandard: while stone walls and chimney breasts are built from stone reclaimed from a nearby recently demolished 1930s air hangar.

The exemplary environmental performance of the structure was a must for the Aldo Leopold Foundation, which strives to promote ecological awareness. However, the design of the centre goes much further to create a truly carbon neutral building. Passive sustainable measures are maximised.

Large windows allow daylight to flood into the building, reducing the requirement for artificial lighting; walls and ceilings are highly insulated; cross ventilation is promoted, via manually-operable windows, to reduce mechanical air handling; and large overhanging eaves allow winter sun to illuminate the interior but protect the building from hot summer irradiance.

Nearly 200 photovoltaic panels line the southerly aspects of centre’s sheet metal roofs in a 39.6 kilowatt array that generates between 60,000 and 70,000 kWh of electricity per year. The array is also connected to the local power grid: the extra electricity produced in the summer being credited against power that may need to be produced during winter months.

The 1115 sqm centre uses 70% less energy than a similar building built to standard US building codes and on-site renewable technologies will produce 110% of the energy consumed in the building.

“Recognising that energy is a driving force not only in environmental issues but now in terms of global social issues, we weren’t sure that net zero was enough,” says Buddy Huffaker, executive director of the foundation. “We felt that ultimately we need to strive to make our built environment carbon neutral. We are still working on this but it links our land stewardship efforts even more intimately with the Leopold Legacy Center.”

Under the centre is a 183 m network of 60 cm diameter concrete pipes. These earth tubes act as a passive ventilation system that operates by pulling external air into the pipes through a large intake and moderating it to the ambient ground temperature before pushing it into the building basement through a UV filter, which eliminates mould and bacteria. Compared to external air temperatures, which can range from -28oC to 35oC, the pipes moderate the air flowing into the building to between -8oC and 23oC, greatly reducing the heating or cooling required.

A radiant floor heating system runs throughout the centre - some 2560 m of tubing – to regulate the ambient internal temperature, while several wood burning fireplaces provide extra heat without impacting on gas or electricity use, by burning timber culled from the managed woodland on the Leopold estate.

All of these measures contribute to a centre that estimates total emissions of 13.42 tonC/yr. This is offset by renewable energies of -6.24 tonC/yr and forest sequestration of -8.75 tonC/yr, giving a net result of -1.57 tonC/yr. The 500 acre forest on the estate is actively managed and its trees will be measured and monitored at regular intervals to ensure maximum sequestration rates. "From this day forward, the Legacy Center sets a new standard in design and construction," says Huffaker.

The building is the first in the US to be recognised by LEED as carbon neutral. "This building does things that people are dreaming about," says Rick Fedrizzi, president of the U.S. Green Building Council. "There are people out there saying, 'Somehow, somewhere a building will be able to do that.' This building is doing it today."