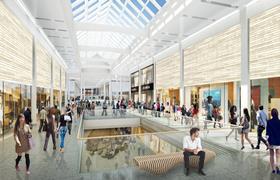 The refurbishment marks the 25th anniversary of the UK’s fourth largest shopping centre, which attracts more than 25 million shoppers a year. Construction is to begin in the autumn with completion expected by the end of 2017.

The project, which comprises 310 shops, 50 restaurants and cafes and a multi-screen cinema. The work will largely be completed out of hours so retail and leisure operators can trade throughout.

Meadowhall Shopping Centre opened in 1990 on the site of a former steelworks.

Meadowhall is set to be boosted by HS2, with the high speed rail link currently expected to make the shopping centre its South Yorkshire stop on the way up to Leeds.

The Yorkshire brance of HS2’s Y-shaped route is not set to complete until 2032.