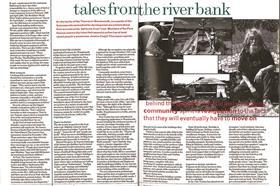 Tales from the river bank

As the London Legacy Development Corporation admits it is having to increase the amount of affordable housing it will build at the Olympic park, we take a look back to 1996, when hundreds of activists from all over the country moved onto a barren piece of land in south London to protest the need for affordable housing.

Situated between Wandsworth bridge flyover and a largely unlet block of luxury flats, the 5.2ha strip of land became a source of contention as owner, Guinness, proposed plans to build a mixed-use development.

Jessica Cargill Thompson reports: “Two months on, the crowds have dwindled to about 40 stalwarts who have set up home in a variety of makeshift structures, defying the eviction order that was served at the end of May.

“The site is easy to spot from the busy main road. Brightly coloured, hand-painted banners proclaim ‘Land for the people’, ‘homes for all’ and ‘people not profit’. What was once a forbidding iron gate has now been thrown open, inviting local residents and passers-by to wander in.”