The London office market revival could be the boost that curtain walling contractors need. So what are the options in terms of cost, and meeting Part L requirements? Steve Mudie of Davis Langdon, an Aecom company, reports

The renaissance of the London commercial office market is a much-needed shot in the arm for the construction industry, especially for the majority of high-end curtain walling contractors that are unable to compete on smaller projects against some of the UK contractors and proprietary systems, which are not affected in the same way by volatility in the currency markets.

As additional London commercial office developments are being brought to market, there is still more supply than demand, both at main contractor and curtain walling contractor level. This is maintaining a cost base that is highly competitive and can only be met by facade contractors eating further into their margin and putting further pressure on their supply chain. This is exacerbated by the strength of the euro against the pound and the combination of both pressures is arguably not sustainable.

For the very large high-end projects in the UK, including commercial high-rise offices with package values above about £30m, facade procurement opportunities have tended to be somewhat limited. Just before the turn of the new millennium a typical tender list for one of these projects could well have included Permasteelisa SPA, Josef Gartner, Scheldebouw BV and Schmidlin UK. With Scheldebouw and Josef Gartner subsequently acquired by the Permasteelisa Group and Schmidlin going out of business, procurement opportunities became very restricted.

The UK has had its fair share of curtain walling contractors from other parts of the world attempting to break into the UK and predominantly London market, including those from the US, Canada and the Middle East. However, none from this list have endured the pace.

The establishment of Yuanda Europe in 2010 signalled a possible change to the market dynamic for large curtain walling projects, with ex-Schmidlin and Gartner management, design and support staff forming the new business and a production plant in China specifically set up for the UK market.

Yuanda Europe has begun to secure curtain-walling projects in and around London and is tendering for others. This has seen the Permasteelisa Group developing its own strategy for competing, including a “Permasteelisa Group offer” for selected projects, based on the utilisation of group resources and purchasing power, with the production and procurement of key materials in the eurozone.

Yuanda is floating on the Hong Kong stock exchange to raise about $300m (25% of the business) for investing in its infrastructure, and the Permasteelisa Group may be sold over the coming months. We will need to observe the outcome and any impact of these events on the market.

The high-end unitised curtain walling market is not just about volume and quality. Smaller projects require the same levels of quality and this is where the moderate-sized specialist facade contractors such as Felix, Focchi, GIG, Metallbau Fruh, Schneider and others have their place in the market.

Then there are the medium-sized contractors that are able to compete with the Permasteelisa Group on certain projects, and against smaller sized contractors, including Lindner Facades, which was established after Lindner Group purchased Schmidlin UK in 2006 and Seele, which has evolved its business to include a unitised curtain walling capability. Mero-Schmidlin sits in the background as a possibility, depending upon how it develops its business offering in the coming years.

Just as Yuanda and Permasteelisa Group appear to be going through change, the announcement of Lindner’s acquisition of Prater to become the largest “total envelope” contractor in the UK was finally made public last week. In all probability this will not have a significant impact on the high-end unitised curtain walling market. However, with Lindner’s own CW65 proprietary curtain-walling system, it opens up opportunities for Prater possibly to compete in the remainder of the UK unitised curtain walling market against the likes of other established UK specialist contractors such as McMullen Architectural Systems, Red Architectural, Parry Bowen, EAG and others.

The new Part L 2010 is now bedding in and design and consultant teams are developing curtain walling solutions that address the guidance notes provided in the document. In simple terms, curtain walling performance for commercial office buildings will always be a question of how much glass is needed to provide the necessary levels of daylight and therefore, how to manage solar gain for protecting the occupants in terms of thermal comfort.

Part L 2010 still enables a high level of flexibility for curtain walling solutions to maintain the architectural diversity that ever-evolving major cities like London thrive on. The following represents an overview of curtain walling solutions that have the capability to address the requirements of Part L, taking into account other key performance criteria that a facade would need to deliver for a commercial office development, and listed in order of cost efficiency. From a cost perspective, the rates are generic and come with the obvious caveat that they are subject to project-specific nuances. The rates are reasonably robust for the current market and are not factored to suit current tender levels.

THE IMPACT OF PART L ON COSTS

There is, of course, a range of variations within the four generic solutions described above. However, these four represent the main
generic options.

Glass coating technology has reached its peak now with the new triple silver coatings maximising light transmittance (about 60%) while quelling all but 27-29%of solar gain.

The flexibility of narrow depth ventilated cavity curtain walls highlighted in 4 above is unparalleled and enables the “all-glass building” to be realised. However, the necessity to gain access to clean the cavity mounted glass and blinds attracts whole life costs. High rise access must be by internal means whereas low rise access could be effected from outside, but with risks and ramifications for both, not least increased operating costs compared with single skin facades as in options 1-3.

Current technological developments in the curtain walling world include double skin facades with non-accessible cavities. These solutions deliver the same G-value performance as existing double skin ventilated cavity systems with the added benefit of superior U-values and acoustic attenuation performance.
The Josef Gartner (Permasteelisa Group) CCF (closed cavity facade) solution functions with clean compressed air introduced within the cavity, to mitigate any condensation risk. Gartner confirms that access to the cavity is not required, assisted by mounting the blinds for motors inside the building and not within the cavity. However, risk assessments are to be encouraged to avoid whole-life false economies.

There are other closed cavity facade solutions than the Gartner CCF available, albeit in the very early days of availability. 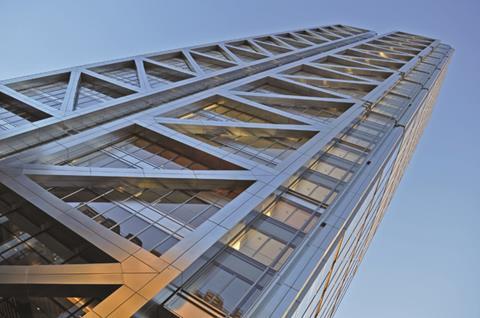