Technology has yet to fully filter through to many parts of the construction process. Debika Ray reports on a roundtable by Bluebeam discussing how to motivate companies to digitalise

Mobile connectivity has vastly improved the speed and efficiency with which we communicate, but the construction industry seems to have been relatively resistant to change – with paperwork still quite common across the process of building.

On 27 June, collaborative software provider Bluebeam held a roundtable event to discuss how mobile project data and digitalisation could be leveraged to better manage and deliver construction projects. Hosted by Building’s architectural correspondent Ike Ijeh, the discussion considered gaps in information sharing, the innovations that are likely to make a difference and the technology that is proving most useful. 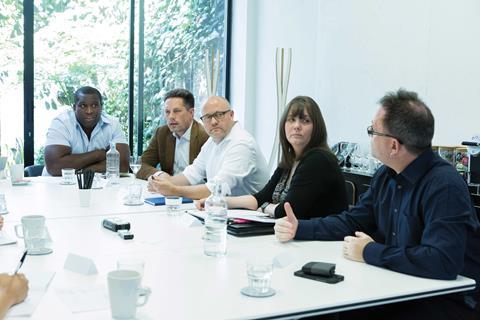 There was broad agreement that despite the clear need for change, there was a reluctance among many in the industry to set aside paper processes – an attitude best described as: “It ain’t broke, so don’t fix it,” according to Laura Brown, group BIM manager at Bowmer & Kirkland.

“The digital experience has to be better than what already exists […] when you provide this, the acceleration in adoption can be dramatic”

But there was also recognition that this was not entirely about stubbornness – in many ways, the technological infrastructure and digital processes necessary to deliver the proven benefits of the data-driven jobsite are not yet in place, leaving individuals in the middle ground where their efforts are not delivering the results they expect. The benefits of digitalisation are realised by evolving entire processes, not by simply adding an app or plugging a few models into a paper-based process.

These are not insurmountable problems, but they highlight the fact that people who aren’t evangelists or haven’t got a financial incentive for technological change are unlikely to modernise until they can directly benefit – and at the moment, what is available is not perceived to be worth the effort.

“If you want people to use technology, it needs to be flawless,” says Vicki Holmes, learning partner at Multiplex.

“If it glitches or pauses, you’ve lost them.”

Sasha Reed, vice-president for industry advocacy at Bluebeam, agrees: “The digital experience has to be better than what already exists – otherwise, as a company, we’ve failed. And when you do provide this, the acceleration in adoption can be dramatic.”

Refining technology takes time, but a related problem is that people are continuing to view things through their current lens – trying to replicate analogue processes in the digital world.

Part of the resistance is the comfort of the familiar. “People tend to want to work with products that look similar to what they know,” says Brown. So, as technology improves, Gibbs Burke, senior construction manager for facades at Ballymore, says investing in education and training is vital.

“If you want people to use technology, it needs to be flawless. If it glitches or pauses, you’ve lost them” 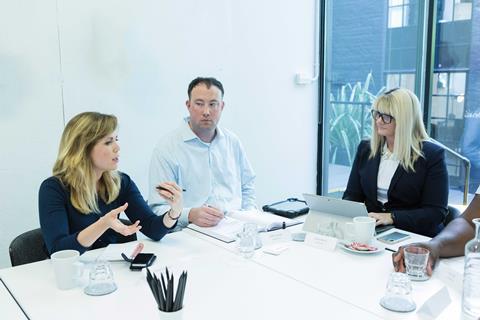 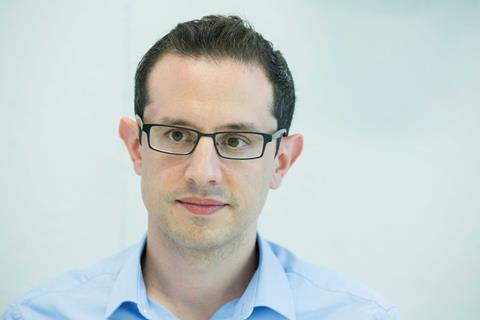 Crucial to this is the content of the training and who it is aimed at – there is less benefit in trying to persuade people at the top of companies, who will more easily see the economic benefits, or new entrants, who will fall in line. It’s those in the middle – experienced people who have been working in a certain way for decades – that should be the real target.

“At the moment we’re selling to the wrong people,” says Holmes, also pointing out that the message needs to be customised. “A quantity surveyor doesn’t care what BIM Level 2 is – they want to know how to open a model and pull off the information. We’re giving everyone training on all the software, when actually you just need to give them what they need to make their job easier.”

Problems with communication are partly because those delivering training do not fully understand what people do, says Shaun Farrell, associate director of technology at Turner & Townsend. “We haven’t been asking the right questions.”

Burke agrees and says trainers then need to leverage this information properly. “You need to explain it as ‘what you won’t need to do anymore if you adopt this new way of working – and how it could make your job easier’.”

This new approach goes beyond technical training to managerial attitude – for example, there is a culture across the industry of valuing those who put in long hours, rather than those who work efficiently. Holmes says: “We are rewarding people for overworking instead of doing something innovative, like teaching new skills.”

And a working knowledge of digital construction is essential if the risk of relying too heavily on BIM managers – who may have technical know-how but little construction project experience – is to be reduced. To illustrate this, Thomas Lindner, group BIM manager at Hurley Palmer Flatt, argues that a BIM manager should aim to ultimately make themselves redundant. “BIM is not a technical faculty – it’s change management. You should schedule your own redundancy and, if you’re still there, you didn’t do your job.” 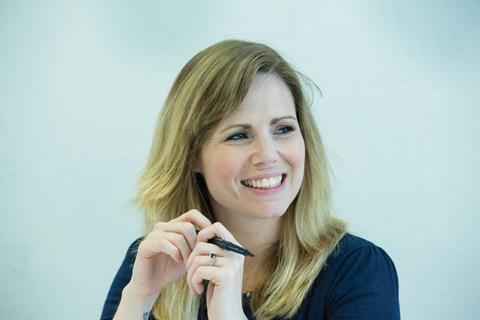 There was agreement that standardisation was central to pushing the industry towards better collaboration. This ranges from the simple (processes, language, naming conventions) to the technical (common data environment, interoperability of systems, standardised designs and components), spanning from industry-wide standardisation to agreement within projects, organisations and teams.

Holmes says there is a failure across the sector to use knowledge from successful projects as a template. “We allow anyone who has a good idea to give it a go, which means you sometimes have four projects running slightly differently, trying to achieve the same outcome, and you can’t assess what’s working and what’s not,” she says.

At present, different standards are used across the industry and, when it comes to a project, organisations are reluctant to give up their own standards. Farrell emphasises the importance of a core team going through the contract together so they have a common understanding of what is required.

Reed refers to an example of standardisation in the US: “The Construction Progress Coalition was founded by contractors who realised that the process of building is not unique and it would be better to co-ordinate, for example, digital printing standards, to allow them to innovate on how they deliver the project.”

“Why not admit that construction is a social process, where you have to build trust between two parties?” 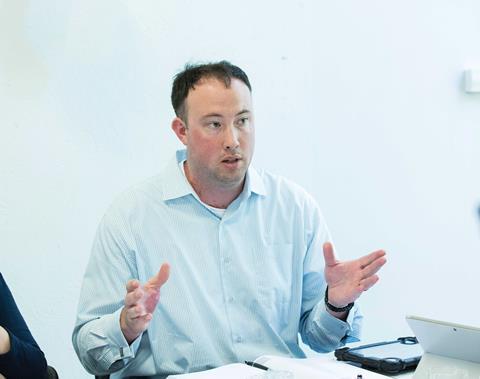 Moving in this direction requires a recognition that agreement on things like naming conventions are basic requirements, not optional ones. “Most people still regard construction as a technical challenge, but it’s not that complicated,” Lindner says. “Why not admit that construction is a social process, where you have to build trust between the parties?”

When it comes to design, Farrell observed standardisation is thought of as a “dirty word” by many – especially architects – as it is wrongly associated with removing creativity. Burke says there is an unhelpful tendency to think each project is unique. “How many projects have you been on when a designers says it’s completely different from what you’ve done before, when you’ve done it thousands of times?”

Partly, the reluctance to standardise is for good reason. Farrell says: “A client might say, you’ve designed a building for me, so I’m never going to pay for the design again, only its reconfiguration.” In contrast, he says, contractors tend to like standardisation. “From a control on site point of view, it’s easier to put the same thing everywhere than to worry about putting the wrong thing in the wrong place.”

James Chambers, UK country manager for Bluebeam, says that until standardisation happens, the industry will continue to work in silos, with a sense of suspicion. Burke points out that part of the problem is people’s instinct to protect their area of expertise to justify their own worth. But there is also an issue with contracts and regulations, which have not kept up.

Lindner says: “Contracts do not support the generation of trust. We don’t have a shared stake in the outcome and we all fight each other when things go wrong.”

There is also a difficulty with language. “There are a lot of subjective words in them, like ‘suitable’ and ‘relevant’,” Farrell says.

There was some disagreement over the client’s role in facilitating digital collaboration. While Davor Stojnic, senior mechanical design engineer at Hilson Moran, argues that as the party that makes the appointments, the client needs to be convinced about the importance of new processes that may cost it money. But others say that, by now, such systems should be business as usual. “The client doesn’t know how to build,” Holmes says. “The biggest gap is the early participants in a project not taking responsibility.” 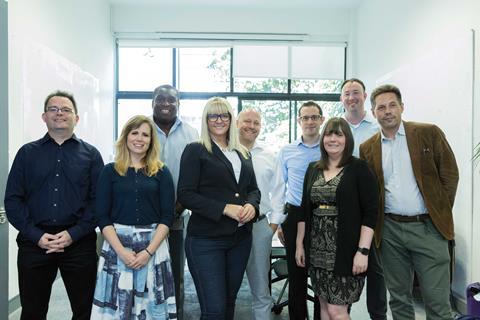 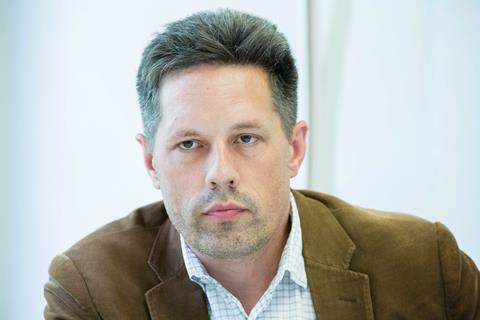 UK construction has recently experienced two major catastrophes: the collapse of Carillion and the fire at Grenfell Tower. The panellists observed that in the wake of these incidents there were finally signs the sector was waking up to the benefits of digitalisation to facilitate better knowledge and accountability.

Reed says a similar thing happened in the US after the 2008 financial crash. “At the time, we were working with 5% of general contractors. When the markets crashed, it was the first time they were incentivised to improve their processes. Now we have 99% of the top 100 contractors.”

The cold reality is that it’s this – the language of risk and money – that creates momentum. In that context, Holmes makes a strong argument: “The risk pot for some tier-one contractors is multi-millions. You could use half of that money earlier for better processes and that could become profit. It’s not a risk pot if you use it on every job.”

To learn more about Bluebeam, go to www.bluebeam.co.uk 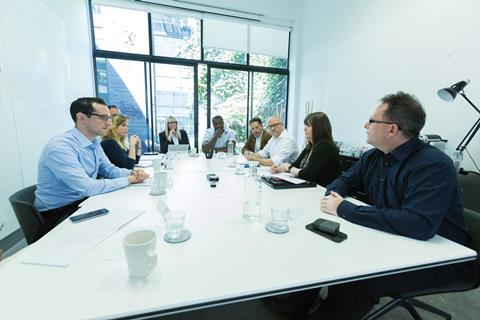 The panel (left to right):