Center Parcs: The place beyond the pines

Center Parcs’ £250m resort will cater for 4,000 visitors in a forest in the green belt just outside Milton Keynes. So how do you build a self-sufficient small town in the middle of a wood? And get permission to do it? 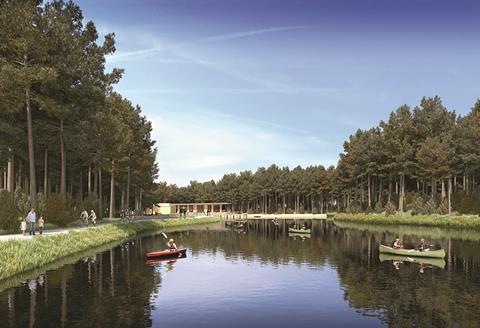 This spring a small patch of woodland on the edge of Milton Keynes will become one of the hottest new holiday destinations in the UK. Nestling among the trees will be a brand new Center Parcs holiday village, the fifth to open in the UK. Visitors will be able to stay in either a hotel or one of 625 woodland lodges and relax in a luxury spa or a subtropical swimming paradise under a giant dome. They can eat in one of 21 restaurants, go shopping or indulge in a multitude of outdoor activities. When operational, the new village at Woburn will accommodate 4,000 visitors, who will be looked after by 1,000 staff.

This formula has proved phenomenally successful for Center Parcs. The company reports an occupancy rate of over 90% in its four operational villages and says bookings have been unaffected by the recession, so wanted a fifth village to cope with demand. Many visitors come for a short three to four-day break, and therefore don’t want a long drive. The existing villages are considered too far from London, but getting permission to build the equivalent of a small town in congested south-east England had proved to be almost impossible. The new village has been built in the heart of the green belt - how did they pull this off?

Getting the green light

The job has been made considerably more difficult by Center Parcs’ exacting site requirements. It needs 400 acres of coniferous woodland - not too hilly - on a free draining sandy soil near good road links. Don Camilleri, Center Parcs construction director for Woburn, says the company looked for a site between the M25, Coventry, the A1 and M40. “The answer was nothing,” he says.

The minimum site size was reduced to 350 acres, and again - nothing. The next step was to relax tree cover to 90% of the site and out came two possibilities. One included ancient woodland, which was discounted, leaving a site in Woburn Forest.

This was in the green belt, making obtaining planning almost impossible. However, “We felt that as this site ticked all the boxes we should take it forward,” says Camilleri. In 2005 Center Parcs applied for planning permission, which was turned down on the basis of the chairman’s casting vote. This close result gave Center Parcs the confidence to spend a further £2m on an appeal, which went to public inquiry. The planning inspector recommended that Hazel Blears, the communities secretary at the time, should refuse the scheme permission. 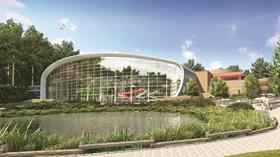 Blears commissioned a team to look at the scheme and found it would benefit the local economy to the tune of £30m a year. “This was in our favour as Hazel Blears turned against her inspectors and approved the application,” says Camilleri.

The £250m scheme is being funded by investor Blackstone. “When you are sticking your neck out with a sum like that and you are going to Blackstone for the money, the cost plan needs to be pretty solid,” explains Camilleri. The scale and complexity of the job, coupled with strict environmental and planning conditions, meant this was potentially a very risky enterprise. Center Parcs engaged project manager Edmond Shipway to manage the job, including the costs, to ensure the scheme stayed on programme and budget.

“The big thing about this job is the scale, as we are building a small town over 375 acres,” says Jamie Crouch, project director for Edmond Shipway. “You’ve got everything on this job, a signature building, an energy centre, a reservoir, a water treatment plant, 12km of roads, a huge amount of technical infrastructure, a lot of fit-out and specialised plant for treating the swimming pool water.”

Planning conditions stipulated that buildings should not be visible from the surrounding hills. The lodges were not a problem as these are mostly single storey and surrounded by trees.

The scheme includes two large complexes - the swimming pool, restaurants and retail in one complex, and the hotel, sports hall, spa and more restaurants in the other. These were located through the simple expedient of releasing balloons on the ground and observing from the surrounding hills how high they rose before becoming visible.

The key to keeping the job on track and meeting Centre Parcs’ exacting quality standards was working up a detailed, carefully thought-through plan and brief, which took a year. “It’s the most complex, well administered brief we have ever dealt with by a client that really knows what it is doing and is determined to implement best practice,” says Peter Gamble, the managing director of Holder Mathias Architects, which designed the two complexes.

This included mitigating risk as much as possible. At a site level, the nearest sewage connection was 9km away - which would have cost £2m to link to - so the decision was made to build a waste water treatment plant on site. “This makes the village more self-sufficient and avoided the time and cost risks of taking the pipe run across farmland to an off-site sewage connection,” says Crouch. At the building level, trial lodges for Woburn Forest were built at other Center Parcs villages. Hotel bedrooms and spa suites were trialled in the same way.

The job has been tendered to three medium-sized contractors. Center Parcs deliberately avoided tendering the work as one big package. “Center Parcs pitched the job not at the biggest companies but the best - in the knowledge they would put their best into it,” says David Stevenson, Edmond Shipway’s managing director. 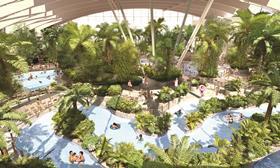 The £30m infrastructure contract went to Birse, a £93m design-and-build contract was awarded to Bowmer and Kirkland for the two large complexes and a £61m contract was given to ISG for the 625 lodges.

An early job was to fell 36.5 acres of trees, as this had to be done during the winter months to avoid disturbing nesting birds. Some 450 common lizards were relocated and ironically, given the recent cull, two badger setts were protected.

Every Center Parcs has a lake; here this was complicated by the need to preserve a bank of trees obscuring one of the big complexes from view. As the trees were in a dip below the lake, a large embankment had to be constructed to protect the trees and retain the water in the lake. A CHP energy centre supplying power and 12MW of heat has been constructed, with hot water supplied to individual lodges via a 10km network of pipes built under the roads.

Both ISG and Bowmer & Kirkland cite logistics as the main challenge of the job. “On a job like this it was logistics rather than technical issues that was the challenge,” says Paul Gransby, ISG’s construction director. “You are feeding the material in for 625 lodges, into a 350-acre site with tight working areas in a multi-contractor environment.” Ian Douglas, Bowmer & Kirkland’s project director, adds that this has been further complicated by regular changes to the road network.

Despite the balloon testing, both large complexes had to be sunk into the ground to keep them invisible from surrounding hills. The hotel, spa and sports hall complex got off to a slow start because of a nesting robin. Secant piling works had to be stopped until the fledglings were ready to leave the nest, causing an eight-week delay. “Every day we were looking to see if they had fledged,” says Stevenson, adding that works were resequenced to keep the programme on track.

Work on the superstructure proved challenging, as the hotel and spa are built from concrete with a steel-framed sports hall sandwiched in the middle. “The challenge has been bringing these constructions together and making them watertight,” says Douglas. 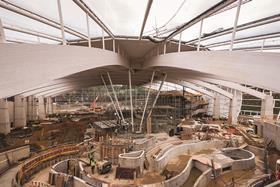 Center Parcs prides itself on its trademark glass dome over the pool complexes, a feature that had to be sacrificed at Woburn to keep the building height down. Instead an ETFE clamshell-type structure has been used, which is supported on dramatic, 70m-long glulam beams sitting on large concrete buttresses. The huge beams had to be delivered in three pieces and assembled on the ground before being craned into position. This was a big moment for Douglas as the beam-to-buttress tolerances were a minuscule 2mm. “It was a heart-in-the-mouth moment for me but they went on without a problem,” he says.

The 625 lodges are dotted all over the site in 109 clusters. ISG used its experience on another large projects to manage the task. “We split the team down in a similar way to the Olympics,” says Gransby. This included using a central management hub to co-ordinate the delivery teams across the site and ensure a consistent product delivered to programme.

Prefabrication was used as much as possible but Gransby says the constrained working environment meant large elements were out of the question. “There is a limit to what you can do when you are working in a forest environment,” he says. “We had to break the modules down to enable us to negotiate a way through the forest and into a small clearing.”

With the village set to open this spring, it is all systems go, with over £1m a day being spent on the job. According to Edmond Shipway, 98.5% of the cost plan has been procured, which is bang on target. “The cost plan prepared by Shipways was perfect,” beams Camilleri.

He has every reason to feel pleased; a massive planning gamble has paid off and the job is being delivered on time and budget. The bookings are already coming in, vindicating Center Parcs’ decision to turn a patch of nondescript coniferous wood into London’s new place to play.