February was a bleak month, with activity down due to insufficient demand and finance, which was not good news for tender prices or employment. Experian Marketing Information Services reports

1. The state of play

The industry returned to negative territory in February as the construction activity index fell below the no-change mark of 50. An eight-point decline took the value to 42, the same outturn as that seen at the end of last year. On a sectoral level, the picture was gloomy across the board. The residential and non-residential activity indices fell by three points to 42 and five points to 44 respectively, while the civil engineering index dropped by 12 points to 40.

The proportion of survey participants experiencing no constraints on activity increased for the second consecutive month to 24% in February. However this was mainly down to the improving weather allowing more work onsite rather than much easing elsewhere. Issues such as insufficient demand (56%) and finance (14%) remained important - in fact the proportion of respondents citing the two constraints has been growing over the past few months. On a brighter note, material, equipment and labour shortages were not holding up building activity for any of those participants that were surveyed.

The tender prices index has broadly been moving in an upward direction since June of last year. However the figure remained below 50 in February, declining by one point to 46, suggesting that firms still feel under pressure to lower prices.

Despite the fact that the employment index has broadly been moving in an upward direction since the middle of last year, there was a change in the direction in February. Declining by four points to 35 meant that the figure reached its lowest level in eight months.

CFR’s Leading Construction Activity Indicator predicts that the industry continued to contract in March, albeit at a weaker pace with a three point rise. Reaching 45, the figure is projected to remain at this level in each of the following two months - suggesting further decline in activity. 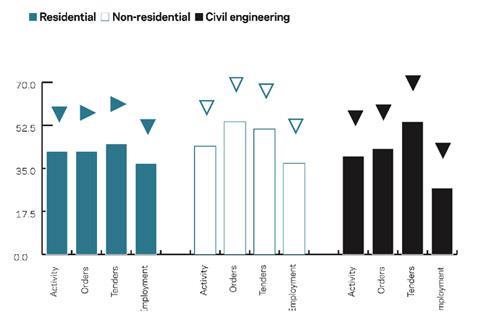 About 46% of residential and non-residential firms reported annual material cost inflation of between 2.6% and 5% in February - a smaller proportion when compared with the 56% of civil engineering firms. A materials increase of over 7.6% was seen by 22% of building firms in February, while almost 10% experienced inflation of between 5.1%
and 7.5%. Only about 8% of residential and non-residential companies reported a price rise of less than 2.5%.

Although almost 17% of civil engineering firms saw a decrease in material costs, the same proportion experienced inflation of over 7.6%. Nearly 6% of the non-building survey respondents reported that costs increased by between 5.1% and 7.5%. 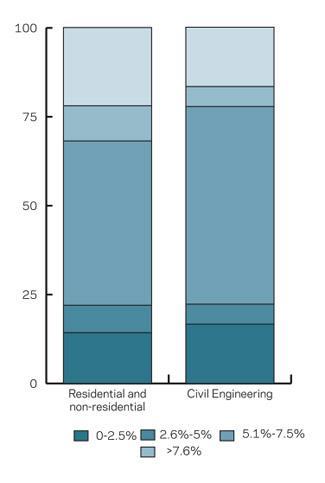 In February, the index for Yorkshire and Humberside increased by five points to 53, which was the first time the figure has climbed over the 50- point mark in seven months. Although the value for East Anglia (39) saw the same magnitude of change, the movement was in the opposite direction.

The indices for the West Midlands and Wales also rose, by four points each, to 43 and 45 respectively. In contrast the North-west (41) index decreased by the same amount.
The East Midlands (38) and the South-east (44) indices fell by three points each in February, while the North (54) saw a slightly smaller fall of two points. There was no change in the figures for the South-west (46), Scotland (41) and Northern Ireland (43).

The index for the UK, which includes firms working in five or more regions, declined by one point to 56. 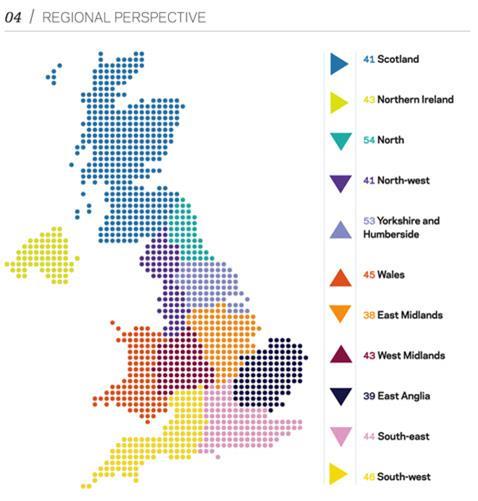