As profits plummet at the UK’s biggest contractors, the industry worries there is something fundamentally wrong with a business model that involves taking on so much risk in exchange for such low margins. Things are still looking up for housebuilders, though … 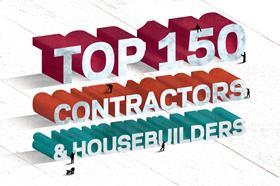 As well as full analysis of the results in the feature below the tables, the complete data set is now available, including:

Top 150 contractors and housebuilders by turnover

It’s not what’s included in this year’s Top 150 contractors and housebuilders tables that’s most significant – but what is omitted. A single name sits like the proverbial elephant among the industry’s great and good, casting a shadow over everything else: Carillion.

In last year’s ranking of the biggest UK construction firms, the collapsed contractor occupied the number two spot, with turnover of £5.2bn, second only to Balfour Beatty. Without Carillion, which went into liquidation in January, the industry is certainly diminished numerically – turnover among the top contractors is down year-on-year by nearly £1bn to £64.5bn. And they appear diminished in other ways too, facing an uncertain economic future at a point when so many questions are being asked about their financial stability.

But it’s not all bad news. The past year saw housebuilders report their fifth year of growth, with turnover, profit and margins all up. As a whole, turnover from the top 150 reached its highest ever level, topping £103bn. But even housebuilders are now squaring up to a more uncertain future, with prices and sales rates stagnating, albeit from a position of strength (see “The housebuilders’ story”, below).

For contractors, however, the tables paint a worrying picture, with the top 10 businesses making a pre-tax profit margin of just 0.38% on their £31bn of turnover – that’s less than £120m.

And the tables point to a growing disparity between the biggest firms and those further down the tables that seem able to pull in much healthier margins. So which firms are prospering, which are struggling, and what do the tables say about the industry overall?

Carillion’s absence aside, the firms’ ranking by turnover has a familiar look. It’s topped by Balfour Beatty, and many players – such as Barratt, now the second biggest firm, and Kier, now third – have just nudged up one place.

A few, particularly housebuilders, recorded big turnover increases that allowed them to do better than that, notably Redrow, Bloor Homes and Countryside, which all jumped several spots.

But for those contractors that achieved the same thing, turnover growth appears to have come at the expense of profitability, with Laing O’Rourke’s return to the turnover top 10 accompanied by a loss, and Galliford Try’s by a big fall in profit.

Altogether, the contractors and housebuilders in the top 150 made a combined £6.8bn of profit from £103.5bn of turnover. But the longstanding disparity between the profitability of housebuilders and contractors remains as prominent as ever.

Ultimately contracting feels like hard graft for the return you get. The whole model continues to not feel right

For the contractors on the list the average margin edged up to 1.7%, whereas housebuilders pulled in 13.8%. And while housebuilders make up less than one-third of the firms in the top 150, they account for 87% of the profit recorded.

That this position is so bad is in part due to the number of contractors continuing to report the effects of problem jobs. Interserve’s whopping £244m loss on its disastrous foray into energy-from-waste projects sits alongside smaller but still huge reported losses at Bouygues (£78m), Laing O’Rourke (£67m), Amey (£44m) and Newarthill/Sir Robert McAlpine (£43m). In contrast, none of the 18 firms reporting losses are housebuilders.

However, there have now been five consecutive years, according to government data, of construction output growth, and for Jan Crosby, managing director at KPMG in the UK, these continued problems indicate inherent weaknesses in the contracting model.

“Ultimately contracting feels like hard graft for the return you get. The whole model continues to not feel right. How can these margins be sustainable when there are such large levels of risk transfer [to contractors]?”

Of course, market fears are heightened in the wake of Carillion’s collapse – there are still some who worry that a second Carillion-style collapse of a major contracting name is possible. “It’d be wrong to say it can’t possibly happen,” says Kevin Cammack, analyst at financial adviser Cenkos.

Paul Cossell, chief executive of the contractor ISG, which has recovered from recent falls to be ranked 17th in this year’s tables, says: “Major failures invariably concentrate the mind, and I think in this instance there is an acknowledgment from all sides that we need to seek a more sustainable future for our industry. We’re seeing that customers are looking further than just price and really interrogating bids and submissions to ensure that what is proposed is realistically achievable.”

Contractors are getting paid more slowly than ever, while government is now leaning on them to pay their suppliers ever more quickly

At the same time, investors in the sector are calling on contractors to urgently focus on strengthening their balance sheets – something Kier, Interserve and Galliford Try are all focusing on, with debt levels and cash positions being closely watched.

But their ability to manage their cash positions by withholding payments to suppliers is reducing, with major clients such as Network Rail seeking to enforce rapid payment, and legislation in progress that would ban the use of retentions.

Alastair Stewart, analyst at financial adviser Stockdale Securities, says: “Contractors are getting paid more slowly than ever, while the government is now leaning on them to pay their suppliers ever more quickly. Cash flow is the key issue.”

The economic outlook, too, provides few reasons to be cheerful. So far this year ONS data has given mixed signals over the health of the construction market, but with the Construction Products Association forecasting stagnation this year and continuing worries over the result of Brexit negotiations, there are reasons to be nervous.

Brendan Kerr, chief executive of demolition and groundworks specialist Keltbray, ranked 52nd, says: “Everyone knows the market is unsettled, but so far there’s still a sense of hope. You’ve got your umbrella out and know the rain’s coming, but so far the sun is still shining.”

Steve Beechey, group strategy director at contractor Wates Group, ranked 21st, says some are taking a more negative view: “Bidding is tightening up, with people worried about where the work will be the year after Brexit,” he says. “There are early signs of contractors panicking and going in with very low margins.”

More positive, however, are signs that clients nervous of being left with the next Carillion on their hands are making more use of framework contracts, which give some certainty of workload.

ISG’s Cossell says: “The trend for 2018 is a strengthening in the volume of framework schemes being considered. There is certainly renewed interest in frameworks, both from a contractor and customer perspective. Frameworks foster collaboration and the sharing of best practice and innovation, and that’s a key pathway we should be steering towards as an industry.”

Nowhere is the somewhat dysfunctional nature of contracting more clear than in the inverse relationship between size and profitability. While the biggest housebuilders take advantage of market dominance and economies of scale to deliver sector-leading margins far above their smaller rivals, in contracting the opposite relationship is true.

The problem for the big firms seems to be a combination of the difficulty of effectively managing businesses of such scale, the requirement to engage in general contracting rather than develop niche specialisms, and the inherent riskiness of large, complex, multi-year construction projects.

KPMG’s Crosby says: “Large contracts are inherently more risky propositions. If a job only lasts 12 months, you can procure your suppliers at the point you win it. But if you’ve got a contract that lasts three years, you can’t possibly lock in those costs up-front.”

Certainly, it’s noticeable that, of the very biggest contractors, it’s the likes of Morgan Sindall, Wates, Willmott Dixon – which tend to take on large numbers of small- and medium-sized jobs – that have retained margins of more than 2%.

Meanwhile megaprojects are often the source of big losses, from Laing O’Rourke’s CHUM hospital in Montreal to the Aberdeen Western Peripheral Bypass that damaged Balfour Beatty, Galliford Try and Carillion.

Moreover, the fact that any reduction in turnover tends to suck cash out of contracting businesses as suppliers are paid makes it very hard to reduce the scale of an operation when the market so demands, tempting firms to bid low to secure turnover. “It’s a big mouth to feed, and it’s really tricky to manage,” says Crosby.

All of which hardly sounds like the world-beating industry heralded in the government’s recent sector deal for construction. Instead, low profit has meant low investment in innovation.

“The government is right to push on offsite manufacturing,” says Wates’ Beechey, “but how can firms invest when they’re on such slim margins? The question is whether the industry needs to go through some sort of a reset.”

ISG’s Cossell, for one, thinks it’s possible: “The future of our industry rests on our ability to generate consistent and sustainable returns for the work we deliver, and tier-one contractors need to lead by example.

”It’s about technological innovation and adoption, smarter ways of working, enhanced operational efficiencies and the people we employ. It’s also about open and honest conversations about risk, capability and capacity.”

Whether that can actually be achieved is much harder to foresee.

The single most profitable housebuilder, Berkeley, made £220,000 in profit out of every single house it sold. While average wages at housebuilders rose by 1.4% over the past year, the remuneration of the highest-paid director increased by an average of 95% – boosted by Persimmon’s controversial bonus scheme. Discounting Persimmon, director remuneration still rose by 14% on average.

However, the first signs of weakness have started to appear following years of quick growth, with the likes of Bovis Homes, Crest Nicholson and McCarthy & Stone all announcing profit warnings over the past 18 months. Kevin Cammack, analyst at Cenkos, says: “We’re definitely getting late on in the market cycle, albeit we’re not where we were in 2008 where we were facing devastating collapses. Housebuilders have infinitely stronger balance sheets than then.”

Weighing on the sector are slowing sales rates, particularly in London and the South-east, the spectre of future interest rate rises, and fears that existing government support in the form of Help to Buy won’t be sustained indefinitely. “The political climate is much more changeable,” says Cammack. “Can the current incredible support to the sector continue?”

Jan Crosby, managing director at KPMG, says that in response housebuilders need to ensure they are not carrying high levels of debt, and consider diversifying away from total reliance on building homes for sale: “They need to think about build to rent. It allows them to de-risk their revenues while showing government they are doing what they can to find ways to accelerate construction.”

* turnover for previous year includes Carillion turnover, despite not being on this year’s list

Turnover includes joint ventures. Ranking comparisons have been affected by the inclusion of companies that were not included in last year’s rankings, and owing to revised methodology, and some cases where there have been changes in corporate reporting, such as a different year end, comparators on figures published last year are not always possible.

Data compilation and analysis was undertaken by Hewes & Associates, to which any queries on the data should be directed: 01428 641518, hewesinfo@aol.com or at www.hewes-associates.com

11 Novus Property Solutions is owned by the Seddon family, but not part of Seddon Group and so listed separately

12 Canary Wharf Contractors – no cost of sales data for 2017

13 Figures for Newarthill, the parent company of Sir Robert McAlpine 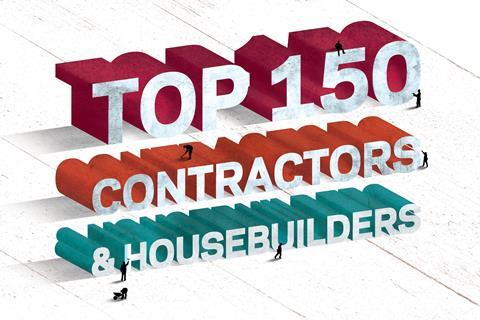