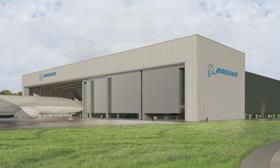 Prater has been appointed by main contractor Sisk to deliver the full envelope solution for Boeing’s GoldCare Maintenance Hangar at Gatwick Airport.

The Surrey-based firm, which is convenitently located near Gatwick, will begin work on the roofing, facade, and glazing in August.

Prater, owned by the German company the Linder Group, proposed changes to the original specification for roofing panels to improve cost and delivery time.

Prater bid manager Karl Moxon said: “Through the use of 3D modelling and a collaborative working relationship with our supply chain, we have been able to determine what ultimately is in the best interests of the project.”

In February John Sisk & Son was confirmed as contractor for the £88m hangar, which will be able to hold multiple Boeing aircrafts and will include office space, taxi connection and perimeter roads.

Prater is ranked 143 in Building’s 2018 Top 150 Contractors & Housebuilders league table, with a turnover of £98m and pre-tax profit of nearly £6m for 2017/18. In November last year Prater’s main rival in the cladding sector, £119m-turnover Lakesmere, went into administration with the loss of more than 100 jobs.