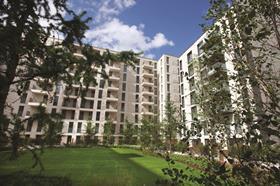 The handover of the 2012 athletes village to the Olympic Delivery Authority is running late for a second time, Building can reveal.

The buildings are currently being converted from athletes’ rooms to flats by Lend Lease, as development partner, and its contractors, for the Olympic Delivery Authority (ODA), which will then sell the homes to a combination of Triathlon Homes and Qatari Diar Delancey.

However, sources close to the project told Building that disagreements over the specification to be handed over have led to complications, meaning the handover is running up to three months behind its expected schedule.

In a statement the ODA said: “The retrofit of East Village [the athletes village] has taken longer than anticipated and the programme has been updated throughout and communicated to all parties involved.”

It said the reasons for the delay were the “scale and complexity of the programme” and the “time to complete the certification and handover process”.

One source said the handover process was “one of the most complex” they had ever seen with Triathlon; Qatari Diar; the ODA; Lend Lease; and Lend Lease’s contractors, all required to sign off the buildings before handover can be completed.

This, they said, was complicated further by the separate parties employing their own consultants.

Building understands Lend Lease’s senior management in Australia are keeping a close eye on the project due to the complications, its size, and its high profile.

This is the second time the athletes village has been hit with delays.

Contractor Galliford Try is currently in a legal dispute with subcontractors Prater and Reddington over delays to the handover of two plots of the village, N13 and N26, before the games.

Building understands that at least one of these plots is also among those that have been handed over late - or are running behind schedule - as part of the conversion of the buildings to flats.

When asked for comment, both Lend Lease and Galliford Try referred Building to the ODA statement.