Our league of Europe’s top 300 contractors and materials producers kicks off with an analysis of the German market, which has just had its first year of growth in a decade. Mark Leftly looks at what’s caused the change – and what it means for British firms considering a trip across the North Sea … 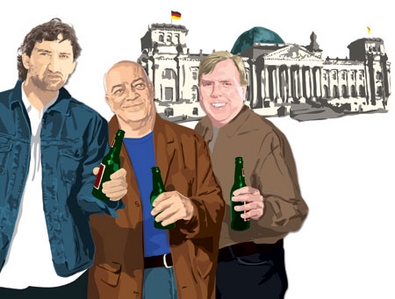 Germany is back. It has hosted a successful World Cup, its first female chancellor became one of Time magazine’s people of the year, and now it has the lowest unemployment figures for four years.

Construction is one of the main beneficiaries of this boom. In the 10 years since 1995, the market shrank 30% and its number of employees halved to 700,000. Last year, the tide finally turned, and output expanded 1.4% to €75bn.

That may not sound like a huge amount, and German contractors may not yet dominate the European league table, but there are clear warning signs for foreign rivals. The country’s biggest contractor, Hochtief, finally broke up the long established Franco-Swedish hegemony of Vinci, Bouygues and Skanska. In 2006 Hochtief’s turnover grew 13%, which placed it above Skanska and within €2bn (£1.3bn) of Bouygues, the number two firm in Europe. Hochtief’s leading domestic rival, Bilfinger Berger, also grew impressively, reaching 15th place thanks to a 16% increase in turnover.

A spokesperson for German construction industry association ZDB says the boom is being driven by the commercial sector, which finally ran out of the space created in the post-reunification boom. “Companies were expanding into the existing capacity,” she says. “The downturn was because the commercial people didn’t spend the money in the years before 2006.”

Despite its return to growth, Germany is likely to prove a difficult nut for British contractors to crack. The country’s renowned “Mittelstand” – the medium-sized,

family-owned companies that dominate at a regional level – tend to have a 200km sphere of influence and the ability to take on large individual buildings.

So powerful are these firms that Hochtief and Bilfinger Berger rarely compete. They have made much of their money abroad, as demonstrated by their work in the UK (see profiles) and, even more starkly, by the fact that they are numbers one and two respectively in Australia. Ralf Doerper, an analyst at Düsseldorf-based finance house West LB, says: “For them, the German market is not so important – most of their exposure is abroad. They are more and more dependent on the global construction market.”

However, what does interest them domestically, and what could tempt UK firms, is the appearance of a PPP market. The ZDB spokeswoman says this accounts for little of the German construction market, given that the public sector only takes up 12% of total spending. This will grow, though: the first two PPP hospital schemes, for Essen and Bremen, were announced last summer. The Bremen scheme has a capital value of about €200m (£130m).

Balfour Beatty last year decided that Germany was a country that could benefit from its PPP expertise and put a bid in for the Bremen scheme. This was quite an accolade, as the firm opened PPP offices in only two other countries in the world last year, Singapore and the US. It set up an office in Munich on the back of its German rail services operations, whose winning run continued this month with a track construction contract in Mannheim.

A spokesman for Balfour says: “We are exploring the PPP market in Germany. It is a question of how we get involved in it and export our UK expertise. We are looking at other opportunities in Germany, which include military accommodation and other hospitals. Should we secure Bremen and put in two or three other bids, the [three-strong] office will grow quickly.”

Balfour Beatty has certainly been clever with its selection of bidding partner for Bremen. It is with Austrian giant Strabag, which will add an immense construction capacity to Balfour Beatty’s PPP expertise. It’s a smart move because in pure construction revenue Strabag, Europe’s seventh biggest contractor this year, is said by West LB’s Doerper to have overtaken Hochtief and Bilfinger Berger in Germany.

So, there are opportunities and it looks as if Balfour’s decision to get in early is a wise one. But, although many UK firms have the necessary PPP expertise to win work there – even if they do not have the same firepower – few are eyeing up the market just yet. Carillion, for example, is concentrating on the UK and Canada for the foreseeable future. But the early indications are that this might just be a missed opportunity …

Hochtief at a glance

• It was founded in 1875 by Balthazar and Philip Helfmann. Balthazar concentrated on building work while Phillip looked to secure new orders. It first major construction work was on the University of Giessen (1878-79) and the Frankfurt courthouse (1884-86).
• Place in this year’s top 300: 3rd
• Turnover: ¤14.9bn (£10.5bn)
• Business divisions: Hochtief has five corporate divisions. These are airports, development, Americas, Asia Pacific and Europe. PPP is a part of development and construction sits in the Europe division.
• Project examples: 44% stake in the £633m construction and operation of a 51km trunk road near Vienna; Australian subsidiary Leighton last month won a £121m iron ore extraction contract 60km south-west of Whyalla; £26m airport terminal redevelopment in Guernsey.

Their men in the UK

John Cann, 49, was brought in last October from John Laing subsidiary Equion, where he ran education and criminal justice PPP investments. He hopes to have 20 projects in three to five years, putting Hochtief within touching distance of Laing, which had about 30 when he left.

He will do this by diversifying into sectors outside education, such as libraries, leisure, courts, police and fire service accommodation. He is also looking to increase staff numbers 20% to about 55 by the end of the year.

“It’s a young, growing company,” says Cann. “It has the potential to grow really quickly and has already grown from virtually nothing.”

So far the company has bid for contracts worth less than £150m, but this could change if Hochtief decides to establish a building arm in the UK. This could lead to joint ventures with the Cann’s PPP division on high-rise courts or acute hospitals.

Hochtief’s UK operations are undergoing a transition. Directors in Germany are understood to be considering launching a building construction arm here this year.

This would complement the company’s strengths in civil engineering and infrastructure, which it gained by buying the civils division of Rush & Tompkins in 1990.

Hochtief UK is run by 59-year-old Stephen Ives, who has been at the helm since 2002, after being business development director for four years. The big change in recent times, he says, has been that the UK arm has a more mainstream role in the overall group.

“Hochtief in the UK was originally part of the international division,” Ives says. “It was at arm’s length from Germany, but it is now part of the European division, fully integrated with the infrastructure team in Germany.”

This means that Hochtief UK can bid for major projects in internal joint ventures in areas where the German parent is particularly strong. For example, it worked with the tunnelling division on a £135m contract for the Channel Tunnel Rail Link two years ago and is currently carrying out a £130m hydro-power scheme in Glendoe, Scotland with the same subsidiary and a dam building sister company.

Ives says that although turnover varies from year to year the peak has been about £100m while he has been in charge. He hopes to hit £200m in the next five years.

He is currently looking at an extension of the Docklands Light Railway in east London, which has to be completed in time for the 2012 London Olympics, a waste-to-energy project in Sussex to start later this year and wind farms and ports in partnership with Hochtief’s marine division.

Bilfinger Berger at a glance

Their men in the UK

Bilfinger Berger has big ambitions for its fledgling UK civils business, which was set up in Manchester last May, after its decision to close its Surrey-based building arm.

Richard Walker was brought in from Mowlem, where he was operations director for highways and major projects, following its takeover by Carillion. Starting off with just three people, he now has a team of 20, many of whom are former colleagues.

“Essentially we’re looking to take on major, complex engineering jobs, where a lot of expertise in the UK has disappeared in the past 15 years,” says Walker. “There are only four or five here that could do that job – the market could take another player.”

Still, starting such a major operation is a difficult job. Although he says that a lot of his job is “cold calling” potential clients, Walker has a bulging contacts book from his Mowlem days. Among his successes there was the £650m widening of junction 10-13 of the M1.

“My team and me have a strong client base – the Highways Agency, the Scottish executive, the national assembly for Wales – who know a lot of us,” says Walker.

He aims to win one PPP and one traditionally procured project a year, to create a £100m-turnover business with 55-60 core staff by 2012. At the moment, the business has only two motorway schemes on its books, in Ireland and the £114m M1 west link scheme in the UK, but is one of two teams shortlisted, with Laing O’Rourke, for the first phase of the £170m Edinburgh tram service.

Walker, who turned 50 this month, has been in the business for 30 years and trained with Sir Robert McAlpine. Despite all his experience, he is impressed with his latest employer, describing the German attitude as “extremely realistic about the marketplace on offer and prepared to have a go”.

He also has a little warning for his rivals. He won’t say what sort of margin he is after, but he does state that it will “reflect German expertise”, suggesting that his Teutonic parent may provide a competitive advantage.

Martin Pugh took up the top job in Bilfinger Berger’s UK and Ireland concessions PPP business at the start of this year. These two countries make up one of four large PPP markets identified by the parent company, the others being North America, Europe and Australia.

It’s a big job that will only get bigger. The 43 year old, who was part of BOT’s founding three-man team at the tail-end of 2000, is transforming the business from one that looked at social infrastructure investments, such as education, to one that deals with major pieces of infrastructure, such as the upcoming tender for the £500m Thames Gateway Bridge PPP.

Pugh says that when he joined, BOT was “virtually a start-up, trying to take an investment business from a bare-bones base into a serious player”. It was very different from his previous job as project director at Carillion Investments – for one thing, Bilfinger Berger did not have the construction capability in the UK to build the PPPs it was bidding for. Instead, it was purely an investment business that formed consortiums with local contractors.

Now, though, Pugh will be able to bid with the civils team, as he will with the Thames bridge project and the forthcoming Dublin Metro, which could be worth more than £1bn.

Pugh says that his “objective is to grow the investment portfolio by one or two projects a year”. It currently has 10 after the sale of stakes in a Hull maternity hospital and some Wiltshire schools. By the end of this year the business will have £33-34m invested in PPP projects in the UK and Ireland, compared with about £25m today.

Pugh said he was “after a new challenge” when he left Carillion. It looks like he got his wish.