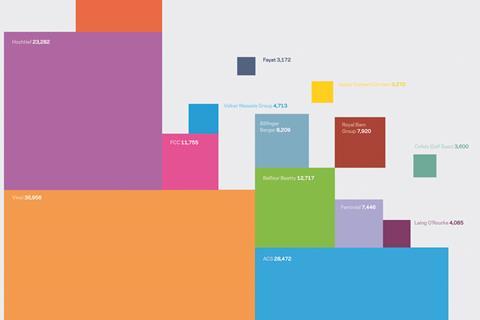 For an interactive league table of the Top European Contractors and Housebuilders, click here

For an interactive league table of the Top European Materials Producers, click here

If the estimates are right, 2012 saw the greatest contraction in European construction output since 2009, a year when world leaders were fighting to prevent the entire global financial system from imploding. Given that EU politicians spent most of 2012 trying to keep the euro from a similar fate, perhaps that shouldn’t be such a surprise.

Research group Euroconstruct estimates that overall construction output fell by 4.7% last year across the 19 European countries that it tracks, bringing the total down to €1,290bn. That compares with a 2007 peak of almost €1,600bn, meaning the market has contracted by almost a fifth in five years. The figures also reveal that the European market will contract by a further 1.6% this year before finally returning to painfully slow growth in 2014.

The depressed markets that those figures reveal have obviously had a massive effect on the performance of the continent’s biggest contractors. Revenues across the 150 largest firms may have grown by 10% between 2011 and 2012, probably as a result of increasing consolidation in the sector as smaller firms either go bust or are bought out, but profits have declined by 17%. While the latest figures reveal some notable success stories (see box 32), the overall picture is one of decline, with some of the biggest names in European construction, including Hochtief and Dalkia, reporting significant losses in the last financial year.

However universal the downturn may seem, it is more difficult than ever to form a single, generalised view about the European construction market. The vast differences in member states’ economic and fiscal positions mean that the outlook for construction firms varies hugely from one country to another - and, as we know only too well in the UK, from one part of a country to another.

Eurostat, the European Union’s statistical agency, produces monthly figures that show the size of the construction sector in relation to the 2005 base year. According to the latest figures (from October last year), construction output is now 88% of what it was in 2005. However, that figure disguises huge differences between individual countries’ performances. Output in Germany, for instance, is currently 20% higher than it was in 2005, while output in Spain is just 45% of what it was in 2005.

So, where might firms find work on the continent? Southern Europe can be pretty much written off the for the foreseeable future. Greece is barely worth mentioning in this context (though it does have the significance that if it were to fall out of the euro it would render all existing forecasts mentioned null and void) and Spain and Portugal are looking at several more years of decline, according to the Euroconstruct forecasts. Graham Robinson, director at research firm Global Construction Perspectives, forecasts that Spain is unlikely to recover to pre-recession levels of construction output until 2025.

The continent’s biggest markets by some margin remain France and Germany (with output of €204bn and €279bn last year respectively), but there are significant issues to contend with for UK firms wishing to find work in either country. To take France first, output is forecast to contract in 2013, albeit marginally by 0.9%, following fractional growth in 2012. However, it is the French public sector’s tendency to award contracts only to French firms that makes for the greatest barrier to entry. “If you want an example of a locked down market, it’s France,” says one analyst. “The big French contractors have a stranglehold on the French market. [UK public bodies] tie themselves in knots over EU procurement rules but the French, bless them, just go on their own merry way.”

German output is expected to grow by a relatively robust 2.5% this year and the country has a reputation for taking EU procurement rules rather more seriously than its western neighbour. What’s more, following the disaster at the Fukoshima nuclear power plant in Japan, the German government permanently shut down eight nuclear reactors and announced in the future Germany’s energy policy would be nuclear free.

According to Steve Canadine, managing director of Ramboll UK, this provides opportunities for the construction sector as Germany reconfigures its energy infrastructure. “There will be a huge demand for alternative forms of energy,” he says. “Renewables are going to feature prominently, but it also means that they’re going to have to keep their existing fossil fuel stock going, and green it while they’re doing that. It’s going to be a source of considerable amounts of
work for the industry.”

Canadine warns that foreign companies can still face challenges accessing the German market and says that firms have to think carefully about the scale of project they target as well as what specialist advice they can bring to the party. “Germany has lots and lots of medium-sized family firms. You can end up competing against them if you’re in the wrong place at the wrong scale,” he says. Analyst Alastair Stewart adds: “I don’t think that Balfour Beatty would ever march into Germany and set up a general building company. However, UK firms can pick up specialist work, as indeed Balfour Beatty have done.”

One country that has seen substantial growth in the last few years is Poland. Construction output in the country grew 11.8% in 2011 and a further 1.6% last year, taking it to €47bn. At that size the Polish market is comparable with Switzerland’s (€50bn) and considerably bigger than most European markets.

However, there is a fly in the vodka. The ongoing modernisation of Poland’s infrastructure had been expected to provide a decent pipeline of work for firms across the continent. But that work, as in many of the recent accession states, is reliant on EU funding and that funding is now in doubt following the failure by member states to decide forthcoming budgets in November last year. As a result, Euroconstruct was forced to revise its forecasts and is now predicting construction output in Poland will contract by 3.4% this year and a further 1% in 2014. Simon Rawlinson, head of strategic research at EC Harris, says: “The failure to set the EU budget creates quite a lot of uncertainty about quite a lot of the major programmes that were going to be delivered in places like Romania and Poland. There’s been rapid growth in those markets, but without that funding that pipeline of work just isn’t going to happen.”

Given the lack of opportunities out there, it should be of some comfort that most parts of the UK construction industry are fairly well insulated from the rest of Europe. UK housebuilders have virtually no presence in mainland Europe and according to Chris Millington, an analyst at Numis Securities, British main contractors on average rely on European markets for just 5%-10% of their revenues. “So, I think that the fortunes of Europe are important for sentiment in the wider stock market,” he says. “But I think it’s less important for the UK construction sector than it is for most other sectors out there.”

There is, of course, an irony here. Just as the UK’s relationship with Europe is rising up the political agenda, the mainland’s importance as a market to our construction industry is diminishing. Increasingly, if British firms are looking to grow overseas, they are looking rather further than the countries next door.

Between 2010 and 2011, contractor Skanska saw an increase in revenue of 3% to €13,150bn. However, the Swedish giant’s profit increased by 99% to €841m, making it the best performing firm among the 10 biggest European construction companies.

According to a spokesperson for Skanska, the impressive increase in profit between 2010 and 2011 can largely be explained by the company’s sale of the Autopista highway in Santiago, Chile. The sale of the PPP project resulted in a net profit of about €498m for Skanska.

Hochtief, Europe’s fourth biggest construction company, saw revenue grow 15% in 2010- 2011. However, over the same period the company went from a €288m profit to a loss of €160m.
The company’s group management report, published last year, attributes the poor results to the group’s Asia-Pacific division suffering from cost and schedule over-runs on two major projects in Australia: the Airport Link in Brisbane and Victorian Desalination Plant near Melbourne. The report says that both projects will now be completed at a substantial loss.

The report also points to losses sustained by subsidiary Habtoor Leighton Group, caused by the “persistently difficult market environment” in Dubai, as well as risk provisioning for two PPP toll road projects in Greece and the Vespucio Norte Express toll road in Chile.

According to a company spokesperson, Hochtief chief executive Marcelino Fernández Verdes will present his new strategy for the company in February.