You're hired: the Apprentice architect 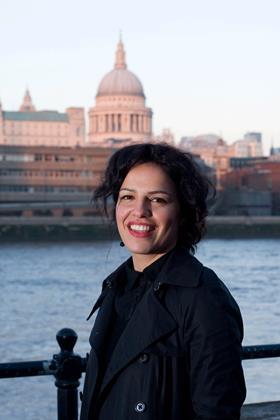 Gabrielle Omar, 29, is co-founder of architecture and interiors firm Lolli and Square. This year she took part in BBC1’s The Apprentice, making it through to the tenth week of the 12-week show before being fired by Sir Alan Sugar. Omar grew up in London, daughter to a Scottish mother and Egyptian father. Adam Branson interviews her about life post-Sugar.

AB: Why did you want to go on the show? Presumably Alan Sugar wasn’t about to employ you as an architect …
GO: No. It was very last minute. I applied and somehow kept on getting through the various stages and found myself on the show. Then it came out and I realised the value of publicity both for myself and for my firm. I’m very grateful for that. I don’t think that I ever actually wanted to win. I think that the longer you’re in the process, the more you’re like “I’m not really sure why I’m here.”

AB: How was it going with Lolli and Square before you went on the show?
GO: We set up our firm about two-and-a-half years ago. In the first six months we didn’t make a single penny. It was very difficult. We did all the fancy stuff like the website and we had flashy business cards, but what we weren’t doing was going out there and networking. So after six months we decided to actually go out. We went to all these embassy parties - the Libyan Embassy party and the Egyptian Embassy party and so on - and ended up getting some really great clients. We realised the value of networking and things started to go quite well. Then I went on the show and now things have skyrocketed. The projects we’re getting in are amazing and what we can charge is great as well. We’re no longer working for free.

AB: Was going on The Apprentice part of a strategy for the company?
GO: It was quite serendipitous, but I did have a discussion with my business partner at the time about how going on the show could destroy both my personal reputation and also the company’s reputation, or it could be really beneficial. I’m a risk taker so I took the decision to go on the show anyway. And it came out quite well. I got quite a positive reaction. I was in there 10 weeks out of 12 and I think I came across as quite nice.

AB: And not mental?
GO: I think I was a bit quirky and a bit out there, but quite nice. I wasn’t ruthless.

AB: What are some of the bigger projects you’ve got on at the moment?
GO: Since doing the show we’ve ventured out of London. We’re doing quite a lot of projects in Edinburgh. For example, we’re doing six apartment blocks on the side of a golf course, a spa and nine bespoke houses.

AB: I saw something about a proposal for an art gallery near the pyramids in Egypt ...
GO: That was a competition we entered and they’ve not gone through with the idea of the museum because of all the conflicts and stuff there. We seem to have picked a really great time to work in the Middle East. Hopefully they will resolve all their issues and we can get back in there, because we understood their cultures and had really good contacts.

AB: The company seems to be about design in the round rather than a traditional architecture practice. Why did you make that decision?
GO: We wanted to take on projects that we found interesting. That doesn’t mean that it’s a loft conversion or a massive museum - it’s a bit of everything. We’ve been commissioned to produce a piece of furniture and had a lot of fun doing so, and we’ve produced massive masterplans. It’s design in the broadest sense that we enjoy.

AB: I understand that you’re interested in trying to boost the public’s understanding of the architecture profession. Why do you think that’s important?
GO: One of the first comments about me on the show was that as an architect all I do is draw houses. Well yes, but I also do a bit more than that. Then talking to people after I left the show I realised that they didn’t really know what I did as an architect. They just had this idea that we just deal with iconic buildings like skyscrapers, but we don’t deal with things like small house extensions. So we came up with the idea of Tea with an Architect, which is just a really informal way of getting architects to integrate with their local community. People know who their local doctor is but they don’t know who their local architect is. So it’s an idea for architects to get to know local people over tea.

AB: I’ve heard that you’re also interested in trying to get more women into the profession …
GO: Unfortunately I think that many industries are still very male dominated, and architecture is very much like that. I’m not sure why that is, but every time you think of an architect it’s normally an older man behind a desk with the drawing board and pens. That’s the public view. So yes, at the moment I’m doing a lot of talks about women in architecture and really celebrating those women who are achieving things. There are some really great examples out there - it isn’t just Zaha Hadid. I want women in architecture to have the confidence to stand up and say ‘this is what I’ve done’.

AB: Okay, it’s Christmas - time for silly stuff. Any top tips for people buying presents for the architects in their lives?
GO: Pens. Most offices these days are very computer orientated but we’re trying to get back to sketching.

AB: What’s the best present you’ve ever been given?
GO: A compass. I’m really into vintage things. I bought a gramophone recently. I’m really into the mechanics of things that were made back in the day.