The latest figures from the Office for National Statistics show that total construction output grew over 2015, but that things are less buoyant for the first quarter of this year

The latest release from the ONS confirms growth of 3% for total construction output in 2015. It reached £131bn after posting its third successive annual expansion. Activity was less buoyant in the first quarter of this year, however. At £32.2bn it was down 1% on the previous quarter and also 2% below its level for the same period of the previous year. On a four-quarter moving total basis, output in the first three months of the year ticked downwards for the first time since early 2013.

The second estimate of GDP was unrevised from the first, confirming growth at 0.4% quarter-on-quarter in the first three months of 2016. Between Q1 2015 and Q1 2016 growth was 2%, revised down 0.1 percentage points from the previous estimate. In the latest quarter, two of the four main industrial groupings showed growth - services output rose by 0.6% marking the 13th consecutive quarter of steady growth, continuing to underpin overall expansion. Within the sector, distribution, hotels and catering output increased by a robust 1.1%, with wholesale and retail trade making a prominent contribution. The service sector’s performance outweighed declines in construction (down 1%) and production (down 0.4%). Within production, manufacturing showed a decline of 0.4% taking the cumulative decline in the year to Q1 2016 to 1.3%, highlighting the challenging global trade backdrop for exporters over the past year.

Performance among the new work sectors was mixed in the first quarter of the year. Only private housing activity managed to post growth on a quarter-on-quarter and annual basis, subsequently reaching its highest quarterly total of £6.3bn. The sector is expected to post successive expansions throughout the current forecast period (2016-2018), albeit at progressively weaker rates. With interest rates not expected to increase until 2017 and little in the way of inflationary pressure demand should remain intact for much of the forecast period.

At £6bn, commercial activity in the first quarter of the year was slightly higher than its level for the same period a year earlier, but unchanged on the previous quarter. Going forwards, Experian predicts that commercial activity will carry on its expansion throughout the forecast period, based off the anticipated resilience in consumer demand. Specific drivers include Sandwell and West Birmingham Acute NHS Trust’s new Midland Metropolitan hospital, and also the £2bn second phase of the Priority School Building Programme.

Public housing outturn totalled £1.2bn in the first three months of the year. It was up on the previous quarter but notably down on the corresponding period of 2015. Given current level of new orders and planned projects in the government construction pipeline, we expect that the sector will post further annual declines, especially in the first half of the forecast period.

The public non-residential sector had a poor start to the year as activity fell on both a quarterly and annual basis to £2.3bn.

While activity in the health sub-sector isn’t expected to be very productive over the forecast period, education should fare better. Large schemes for UCL and Edinburgh university ought to support growth towards 2018.
Infrastructure output came off the boil slightly in the first three months of the year. Nevertheless, at £4.1bn output remained at a high level. After a bumper 2015 we expect output to remain quite flat over the forecast period. It’s worth noting that our base case forecasts are now exclusive of new nuclear build projects, given the growing uncertainty surrounding them.

The industrial sector had a particularly poor start to the year as activity fell notably on a quarterly and annual basis to £919m. This has led to a downgrade in our expectations for growth in the near-term. However the outlook is more positive for the latter part of the forecast period. 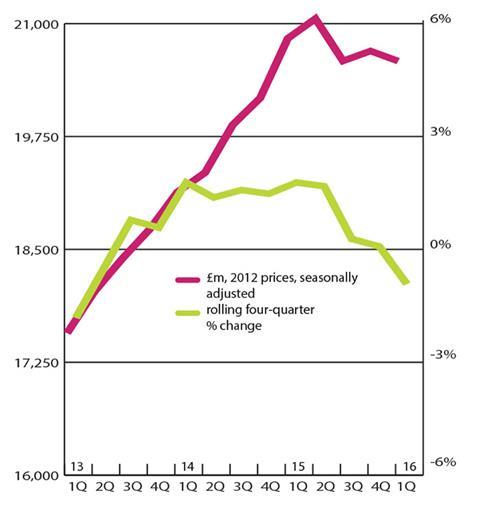 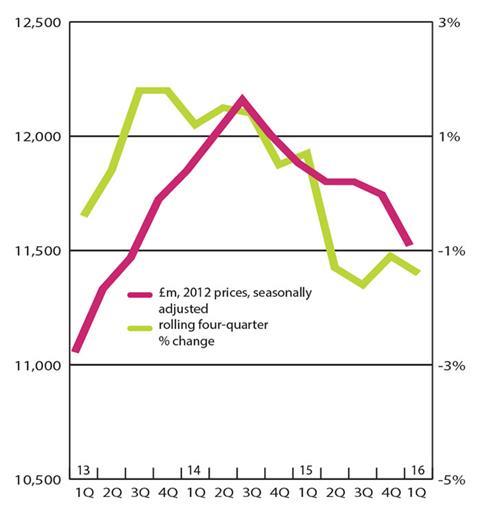 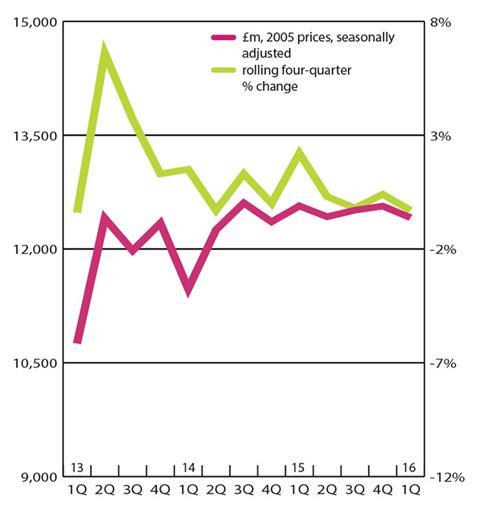 A disappointing first quarter for many of the new work sectors has led Experian to downgrade our near-term expectations for overall construction activity growth. This also fits with added uncertainty in the wider economy in the face of falling demand from the eurozone and further afield, coupled with degradation in each major component of output with the exception of consumer spending.

New work output only increased in five out of 11 regions and devolved nations. The East Midlands and east of England experienced the strongest expansions. In contrast Yorkshire & Humber and the North-east suffered the sharpest declines on the same measures.

Activity for the repair and maintenance sector (R&M) increased in nine out of 11 regions and devolved nations on an annual basis in the first three months of the year. Of those, Scotland and the North-east saw the largest expansions.

Six out of 11 regions and devolved nations experienced an increase to new work orders in the first quarter of 2016, when compared with the same period a year earlier. London and the South-west recorded the largest gains.