The UK economy has enjoyed four years of uninterrupted growth and GDP is higher than its pre-crisis peak in 2008 but the outlook for the next two years has weakened following the Brexit vote. Experian Economics reports

The latest GDP data released by the Office for National Statistics (ONS) showed that the economy grew by 0.6% quarter-on-quarter in the final quarter of 2016, the same rate of growth as in the previous two quarters. The UK economy has now enjoyed four years of uninterrupted growth and GDP is 8.7% higher than its pre-crisis peak in 2008. GDP growth in the fourth quarter 2016 was driven predominantly by a 0.8% increase in service sector output.

The outlook for the next two years for the UK economy has weakened significantly following the Brexit vote. Inflation, which reached a two year high of 1.6% in December, threatens to erode real income growth and curb consumer spending, which has supported recent output expansion to date. Meanwhile capital spending is set to weaken further as uncertainty persists. There is likely to be some gain from the more competitive exchange rate, but with global demand remaining weak we expect this to be heavily outweighed by the fall in domestic demand, despite looser monetary and fiscal stances.

Between October and December 2016 total construction output rose by 3% to £34.69bn compared with the corresponding period in 2015. Among new work sectors, the private housing market experienced the greatest growth of 13% to £6.98bn. Overall, moderate growth is still predicted for private housing output over the next three years.

Despite posting an 8% increase over the same period to £1.11bn, public housing growth is expected to contract over the forecast period to 2019. Local authority budget constraints, the extension of Right to Buy to housing associations, and rent reductions are predicted to greatly reduce the number of new public housing projects over the mid-term.

The commercial market posted an increase of 7% to £6.67bn in the three months to December on an annual basis. While continued growth is still expected over the mid-term, lasting uncertainty surrounding the UK’s exit from the EU is likely to limit the extent of growth, as slower foreign direct investment, rising inflation and rising import costs take a particular toll on the commercial sector. The immediate impact will be limited, as most projects fuelling output will already be in the construction phase, but we could see declining growth in the subsequent two years, as Brexit negotiations unfold.

In the fourth quarter 2016 the public non-residential sector registered modest year-on-year expansion of 1% to £2.44bn. The sector is expected to grow at a similarly modest rate in the medium term, supported by a few major, long-term university and defence projects, which are expected to start soon.

Industrial output continued to decline, with the biggest fall of 11% to £944m on an annual basis in the three months to December. Growth in the sector is now expected to stagnate somewhat, due to very few large-scale projects commencing in the near future. As has been the case over the last few years, growth is anticipated to be driven by output in the factories sub-sector, which is expected to account for just below 60% of industrial output in 2019. One of the largest factory projects in the pipeline is Jaguar Land Rover’s £500m factory in Coventry.

In the fourth quarter 2016, infrastructure output declined by 7% to £4.43bn compared with the same period a year earlier. Activity is predicted to stabilise this year before moderate expansion in 2018. Output growth is then expected to increase significantly from 2019 onwards, due to a number of large-scale transport and energy projects, including the Hinkley Point C nuclear power station and the High Speed 2 rail project. 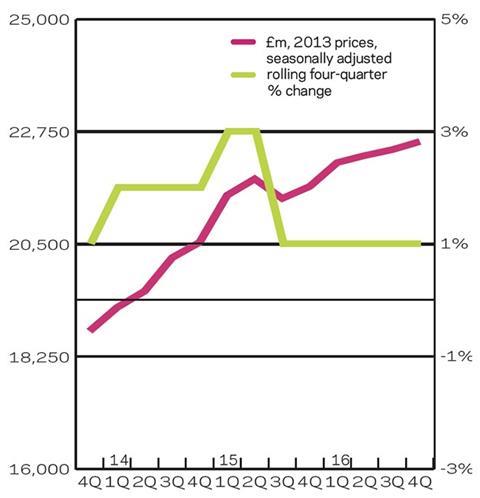 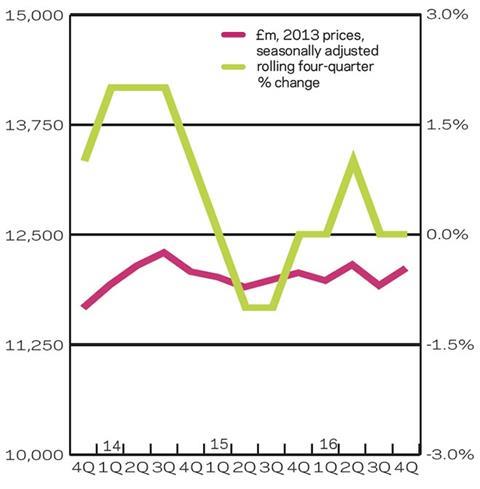 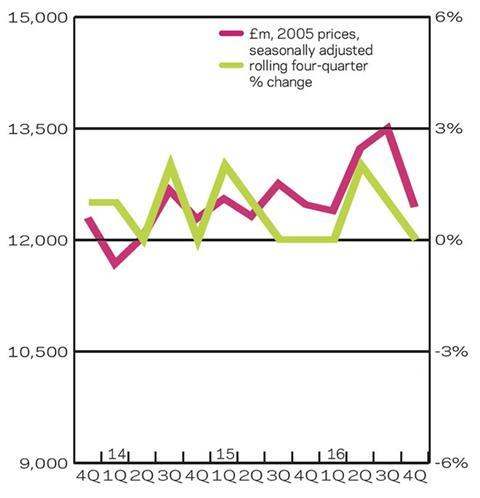 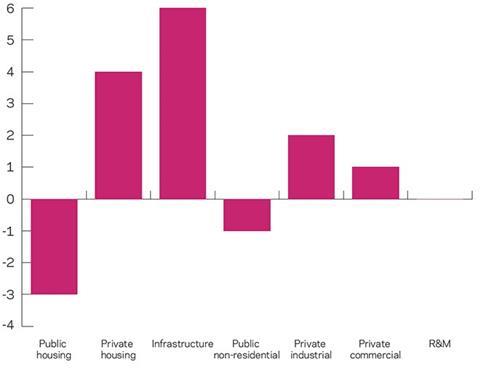 In the three months to December, new work output in current prices increased in nine out of 11 regions and devolved nations on an annual basis.

Output for the repair and maintenance sector (R&M) only increased in two out of 11 regions and devolved nations on the same measure.

New work orders increased in six out of 11 regions on a yearly basis in the three months to December 2016. The South-west experienced the biggest absolute rise in orders as they went from £889m to £1.76bn.