The latest Office for National Statistics figures show the economy has been in good shape since the referendum vote to leave the European Union. However, more challenging times seem to be ahead. Experian Economics reports

The final estimate of GDP growth for the third quarter of 2016 came in at 0.6% quarter-on-quarter in real terms, revised up by 0.1 percentage points from the second estimate. The pattern of GDP growth appears to be broadly unaffected by the European Union (EU) referendum vote thus far.

Office for National Statistics (ONS) figures show the economy has been in good shape since the referendum. However, the latest data shows the first fall in employment since Q2 2015 and in November inflation rose to 1.2%, its highest level since October 2014. Price increases will erode real disposable incomes over the next year.

Between July and September last year total construction output rose by 2% to £33.97bn compared with the corresponding period in 2015. Among the new work sectors the private housing market experienced the greatest growth of 14% to £6.72bn. Overall, moderate growth has been predicted for private housing output over the next three years.

The commercial market posted an increase of 10% to £6.55bn in the three months to September last year on an annual basis. The commercial construction sector is felt to be one of the most vulnerable to ongoing uncertainty around our exit from the EU. We have already seen investment growth slow markedly in the second half of 2016 and it is likely to turn negative this year and next. While it is unlikely to impact this year, as most projects fuelling output will already be in the construction phase, it could lead to some decline in the following two years.

In Q3 2016 the public non-residential (£2.48bn) and public housing (£1.07bn) sectors registered modest yearly expansion of 4% and 3% respectively. The former is expected to grow modestly in the medium term. In the education subsector there are a number of large university projects due to start soon and phase 2 of the Priority School Building Programme is largely publicly funded. The outlook for public housing remains gloomy with local authority budget constraints, the extension of Right to Buy to housing associations, and rent reductions taking their toll. It is difficult not to forecast further declines in output for this year and next. However, the sector is predicted to stabilise at around two thirds of its 2014 peak in 2019.

Industrial output saw the biggest fall of 14% to £984m on an annual basis in the three months to September last year. The sector is likely to experience annual average growth of 2% in the three years to 2019. Growth is anticipated to be driven by output in the factories subsector, which is expected to account for just below 60% of industrial output in 2019. One of the largest factory projects in the pipeline is Jaguar Land Rover’s £500m factory in Coventry.

In the Q3 2016 infrastructure output declined by 11% to £4.41bn compared with the same period a year earlier. Activity is predicted to stabilise this year before moderate expansion in 2018. Output growth is expected to reach double digits in 2019 due to the benefits of increased output from Hinkley Point C, the High Speed 2 project and further expenditure on a number of road schemes. The main drivers of activity in infrastructure are investment by private sector companies in regulated industries or government-funded programmes and it is considered that in the review period there will not be any significant impact deriving from the uncertainty following the Brexit vote. 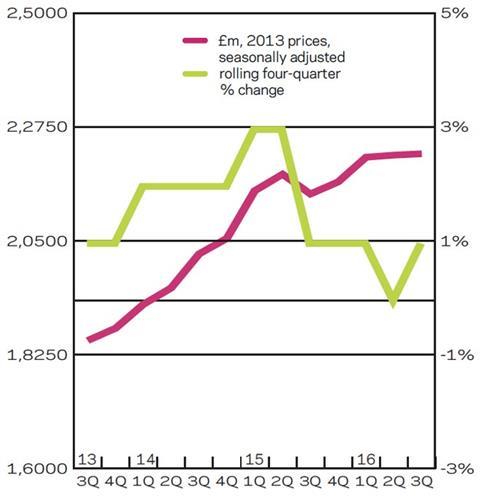 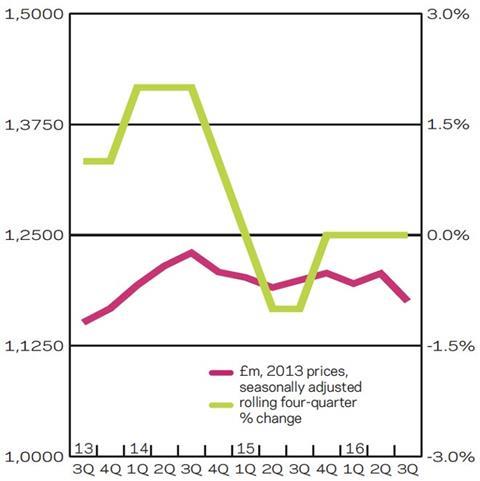 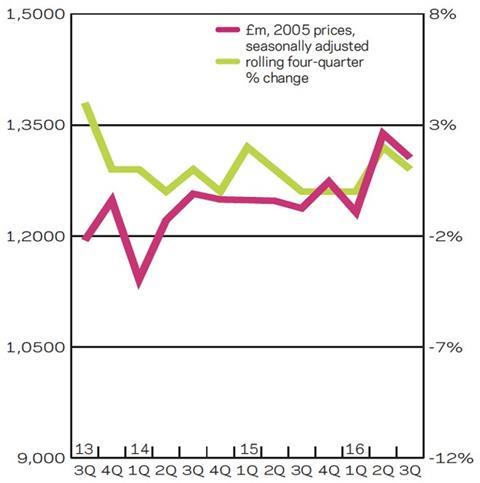 All of the new work sectors are projected to post annual average growth over the forecast period bar the public housing one where average yearly declines of 4% are anticipated. 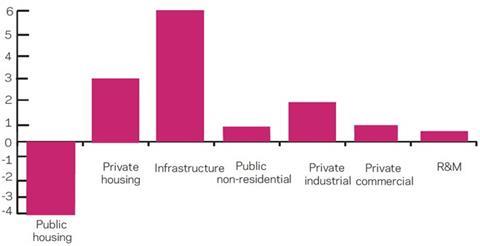 In the three months to September, new work output in current prices increased in seven out of 11 regions and devolved nations on an annual basis.

Output for the repair and maintenance sector (R&M) only increased in four out of 11 regions and devolved nations on the same measure.

New work orders increased in eight out of 11 regions on a yearly basis in the three months to September 2016. The North-west experienced the biggest absolute rise in orders as they went from £1.91bn to £2.67bn.