The Olympics may need a basketball venue the size of an aeroplane hanger, but London can probably get by without one after they’re over. So they’ve made the whole thing demountable 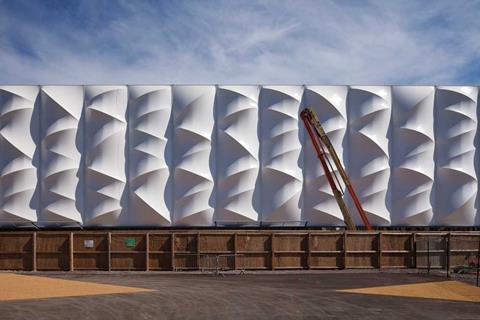 Over two months, a structure large enough to house a Boeing 747 has materialised at the northern end of the Olympic park, between the velodrome and the Olympic village. The 10-storey building has become the site’s third largest venue. But what sets it apart - and goes some way to explaining its rapid arrival - is that it’s not a permanent fixture. After the Paralympics, it will leave without trace.

The notion of using temporary venues is a key part of the Olympic Delivery Authority’s (ODA) white elephant hunt. And although basketball is a popular Olympic sport, London is unlikely to have much use for a 12,000-seat arena. So it was an ideal candidate to be a temporary venue, says Paul Snoddy, project sponsor for the arena with the ODA.

But how do you design something so huge so it can be packed up and trucked away like a wedding marquee? Here’s how …

The arena was designed as a kit of parts that can be sold or put to use individually or as a whole. The ODA will rent the venue, after which Barr Construction, which owns its structure, will dismantle it so it can be used elsewhere. It’s the same story for the other elements. The temporary seating, for example, is supplied by Slick Seating and will go back to the hire market, as will the portable court and concessions kiosks.

However, designing a structure of this size to be demountable is quite a task, and a bespoke solution was required. Amjad Ali, the project manager with the ODA, says the authority first spent a long time talking to the events industry about the best way to approach the build. “It needed to be something that could be easily taken down and transported,” he says. And although this is a temporary structure, it still had to comply with the Building Regulations, although it was exempt from Part L. The answer that was settled on was to develop a slender steel portal-frame structure, clad in a removable PVC membrane.

Preparing the ground and erecting the frame

When the arena is packed up and taken away, there will be no trace that a 10-storey structure ever stood here. No holes in the ground, anyway. Before construction started, the site was prepared using a special vibrating roller that compacted the top 3m of soil to provide a stable base.

“If you were designing a venue like this conventionally you would submerge it into the ground,” says Snoddy. “However, removing tonnes of soil and then reinstating it after the event didn’t make sense.”

The building’s structural frame is mounted on a perimeter ring beam made of reinforced concrete. This has been designed to use minimal material and varies in depth from 600mm to 1m and is about 2m wide. The beam itself sits on 800 vibro stone columns, which have been created by boring a hole, pouring in stone and compacting it.

About 3,000 tonnes of recycled ballast were used to create the columns. “The good thing with this method is we don’t have to remove them afterwards; we simply remove the ring beam and recycle that,” says Ali.

The 1,000-tonne steel structure was brought to site in 86 trucks. Sixteen massive portal frames, each with a span of 96m, were placed 6m apart to create the basic form. At the highest point these rise to 35m but to soften the building’s bulk, a hipped roof has been used that gives a continuous eaves-level all the way around.

The arched trusses, fabricated by Watson Steel in Bolton, were delivered in four sections along with the columns. A carefully choreographed installation procedure using four cranes then came into play. First, the trusses were assembled on the ground and placed on temporary supports while the two columns were craned into position. These were pinned to preinstalled base plates before the truss was lifted and dropped into place. Each frame took around a week to prepare, with the lifting procedure taking the best part of a day. “When you see the first truss go up it brings it home to you how slender they are,” says Alan Howatson of Barr Construction. At their deepest point the trusses measure just 3.2m.

With the first frame erected, those on either side were slotted in and work could begin to bolt in place the steelwork that connects them, helping to stabilise the structure.

A building of this scale with no windows and clad in the same material all the way around is unlikely to stir the emotions. To inject some interest, architect Wilkinson Eyre came up with a simple arrangement of curving steel tubes that bow outwards between each column of the portal frame. These are differently arranged to provide a constantly varying surface.

Stretched across these tubes is a skin of PVC. The facade is made up of 6m-wide sections that were hauled up a track mounted to the column and stretched across the tubes to clip into another track on the column opposite. Unlike other materials, like ETFE, PVC doesn’t have a “memory”: it springs back to its original shape when it is taken down, making it easier to reuse.

It was a similar story for the roof panels, although here a continuous 6m-wide sheet of PVC was clipped into tracks and then run across the roof in a single operation. “The first roof panel took six hours to install,” says Ali. “We got it down to two hours by the end”.

Now the venue is enclosed, work is beginning on the fit-out. A concrete slab will be laid to support the seating scaffold and steel supports for the stairs, lifts and toilet blocks.

Just before the test event, the London Organising Committee of the Olympic Games (Locog) will lay a portable court that will be removed after the test and reinstalled just before the Games. “One of the issues is that this is not a conditioned building and the floor would warp if it was left in,” says Ali.

In the event that 2012 brings a hot summer, portable air handling units connected to external chillers are placed under the raked seats. These will blow out cooled air that warms, rises and vents through high-level louvres. “It’s a simple solution and avoids lots of ductwork,” says Ali. The units will be commissioned in March 2011.

Currently, lighting designer United Visual Artists is working up an external lighting scheme to add more drama to the elevations. According to Snoddy, the idea is that the skin will be backlit from the inside and also have light projected onto it. He’s coy about the design but says it will go to planning soon.

The question of end-use and sellability after the Games has been important throughout the arena’s design and construction. The design team rejected the option of a bespoke seating system for the arena as it might be harder to put back out into the hire market. But the sheer scale of the structure means that there is only a small market of potential users. According to Barr’s Alan Howatson, it’s only now that the structure is going up that people will fully appreciate its size and potential uses.

There’s nothing to stop it becoming a permanent venue on a different site, and Howatson suggests it would be ideal for a soccer academy. But it’s been designed and built as a flexible space and may have future as a relocatable building in its current size, made smaller by omitting some of the bays, or split up into individual elements. Whatever happens to it, the ODA won’t have to worry.

Three other temporary venues to watch

Water polo This 5,000-seat covered arena is next to the aquatics centre; the warm-up pool alongside is being designed by David Morley Architects.

Aquatics training As part of the Eton Manor complex in the north of the park there will be three Olympic-size swimming pools, a synchronised swimming pool and a water polo pool together with a 10,500-seat venue for the wheelchair tennis competition. Careys is the lead contractor.

Hockey centre This venue will be erected next to the international broadcast centre for the hockey games and seven-a-side and five-a-side Paralympics football. It will have two separate pitches: the main competition pitch will have a capacity of 15,000 and the second pitch 5,000. After the Games it will move to the the Eton Manor group of facilities.