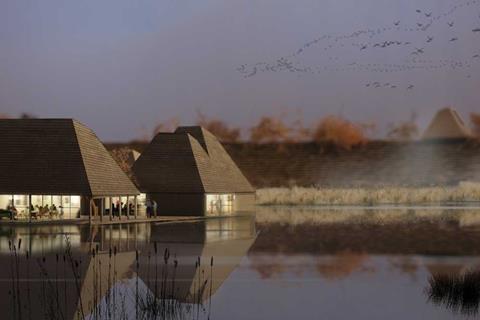 A disused gravel quarry off junction 31 of the M6 might seem an odd setting for a pioneering construction project. But on a drained lake bed at the lowest point of the site stands a 2.25m high block of concrete covering an area more than half the size of a football pitch. In six months the bund holding back the water will be removed and the lake reflooded. At this point, if all goes to plan, the entire structure should bob to the surface, topped by a visitor and education centre.

This “floating world” is the brainchild of the fledgling practice Adam Khan Architects, which in 2008 won an RIBA competition to help the Lancashire Wildlife Trust put the 100 ha wetland habitat at Brockholes, near Preston, on the map.

Ian Selby, project manager of Brockholes, explains that running a nature reserve of this size costs about £100,000 a year so a way of generating income was needed. Just as cities have learnt that an iconic building can do wonders for tourist traffic, Selby is hoping to entice 250,000 visitors from the 27 million cars that pass the front gates every year. A key part of the attraction is the five barn-like structures that will sit less than a foot off the water and provide visitors with firsthand experience of the wetlands and wildlife.

Although the floating aspect of the £8.6m development adds to the appeal, it is also a practical response to building on a flood plain. “When we first began thinking about the design, we thought we’d have to build a massive foundation. That’s when the light bulb came on. If you’re building a massive raft foundation, why not build a real raft?” explains architect Adam Khan.

Floating homes might be commonplace in Holland, but in the UK they are rare and the Brockholes project is on an altogether bigger scale than any domestic development. The initial idea was to create an archipelago of five “islands” to support an education centre, conference facility, cafe, exhibition space and shop, but Khan says there were problems, including maintaining level access between them, and cost. Instead, a single floating deck is being created and the single-storey, timber-frame pavilions will sit on top of this.

The architect already had a vision for lightweight timber structures that tread lightly on the environment, but there was also the practical issue of how to build a structure that would float. Keeping the weight down was of course an issue, but the answer lies in the 65m by 42m pontoon currently being built on the lake bed. One of the biggest technical challenges in creating this pontoon was that it had to be stiff enough so that it wouldn’t flex. This was made more difficult by the position of the buildings, which sit at the edges.

Added to this was the architect’s wish to keep the distance from the deck to the water - known in nautical terms as the “freeboard” - as small as possible to heighten the visitor experience. This ruled out simply building a “big float” and placing the buildings on top.

Instead, Price & Myers designed the pontoon to take a live load of 2kN/m2 which equates to around 5,000 people. As the buildings only allow for a maximum of 400 visitors this gives a large factor of safety and if for any reason a group of people should rush to one corner of the visitor centre - say if a golden eagle suddenly lands - it shouldn’t sink any more than 200mm, says structural engineer James Engwall.

In the final design the pontoon will float 300mm higher than the water level - 200mm to allow for the defection from the live load and 50mm for tolerances in the construction, leaving a minimum “freeboard” of 50mm as a factor of safety.

Several options for creating the pontoon were considered. First was the idea of using a series of watertight steel boxes, which could be fabricated in a workshop and then bolted or welded together on site. This would have been the most straightforward solution, but the cost was prohibitive. A deck supported on steel trusses connected to large floats was also considered, but the trusses would have needed to be three or four metres deep to provide the required stiffness.

Concrete was the other obvious choice.

Thin concrete shell construction techniques similar to those used for creating the pontoons of floating homes were looked at, but ruled out because of concerns over durability. Instead, a design using reinforced concrete was developed.

The project is being constructed by Mansell Construction and Balfour Beatty Civil Engineering and is essentially split into a civil engineering build - the pontoon - and the superstructure.

One of the first considerations was whether to construct and float the pontoon before erecting the buildings or to do it all in one go, in the hope that it would float. The first option was chosen because when it came to the buildings, as one wag put it, you can’t use a spirit level on a boat.

The pontoon is essentially a large concrete box with a series of internal walls that provide stiffness. Because of its size - together with buildings it will weigh in at 5,700 tonnes - it is being built in situ.

The first stage was to construct a bund to isolate the part of the lake where the visitor centre will float. After draining and clearing the lake bed of silt, a thin layer of concrete was laid to provide a working base. One of the fears of building the pontoon on the lake bed was that when it came to floating it, the suction between the base and the ground would prevent it from rising smoothly with the water. To overcome this, the base has been cast on a layer of plastic “egg crate” that will allow water to creep under the pontoon when the bund is removed.

To meet the 12-month construction programme for a spring 2011 opening, Balfour Beatty Civil Engineering had to devise a way of building the pontoon quickly. The pontoon is divided up into a number of “super cells” created by the base, outer walls and a number of the key internal walls that provide stiffness. These were built traditionally using temporary formwork.

Each of these super cells contains 14 further cells. When it came to constructing these, the process was speeded up by using dense polystyrene blocks that sit in these cells as permanent formwork. The 3.6m x 2.4m x 1.8m polystyrene blocks were dropped into place, then reinforcing steel was positioned in the voids between the blocks and concrete pumped in. “This shaved about six to eight weeks off the programme,” says Dragan Barnett, operations director at Balfour Beatty Civil Engineering.

Once the internal walls were completed the top deck was cast as one, minimising joint preparation and speeding up construction.

About 4,275 tonnes of concrete is being used in the pontoon’s construction. Barnett says the team has had to keep a close eye on the exact amounts used in the pours.

“If we were over by 1% or 2%, that can make a significant difference to the overall weight of the structure and we couldn’t afford this given the small tolerance in the depth of the freeboard,” adds Barnett.

The volume of concrete used to build the pontoon is slightly more than a traditional foundation, but the type of concrete used came under scrutiny because the team wants to achieve a BREEAM “outstanding” rating. The concrete specification explored the use of a low cement content and recycled aggregate to help hit the target of 25% recycled materials on site. Bardon Concrete, part of Aggregate Industries, came up with a 31% pulverised fuel ash cement substitution to help bring down the embodied carbon of the concrete. The requirement for recycled aggregates had to be dropped, however.

“Part of the problem is that getting the aggregate tested and certified for use in a structural application like this isn’t viable,” says Roy Ainsworth, regional technical manager at Aggregate Industries.

The aim is to finish the buildings before the whole structure is floated early next year. This will be the moment of truth, but it should be a much gentler affair than a typical ship launch. The idea is to remove the bund and then increase the level of water in the lake to a point where enough uplift is created to float the pontoon. Once afloat, water will be pumped into a number of trimming tanks to bring the structure level.

By next spring, bird watchers and wildlife fans will be able to experience the floating visitor centre first hand. And they might be joined by a few developers keen to see if floating buildings might catch on. 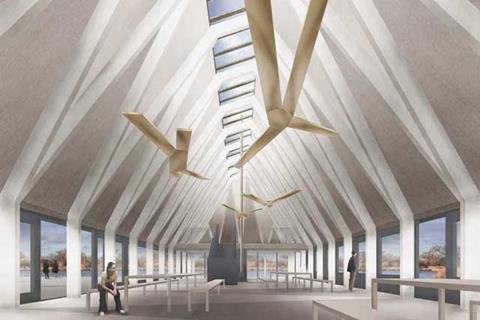 Apart from the fact that the visitor centre needs to float, the Lancashire Wildlife Trust and the architects also wanted the development to tread lightly in environmental terms. To that end, the village-like cluster of buildings on the pontoon are all single-storey, lightweight timber structures which will largely be fabricated off-site, minimising waste and disturbance to surrounding wildlife.

The glulam timber portal frames are now being craned into position and these will be clad with structural insulated panels to help provide a well sealed, thermally efficient envelope that should outperform Building Regulations requirements. The large pitched roofs will be clad in oak shakes while timber battens will be used to clad the walls.

The services strategy for the buildings has also been designed with sustainability in mind, says Duncan MacLennan, M&E engineer with Max Fordham. The glazing is optimised so that the heat loss in winter - and gain in summer - does not outweigh the benefits of high levels of daylighting. The buildings are all naturally ventilated, while heating and hot water are generated using a biomass boiler fuelled by wood chips.

All water comes from an on-site borehole while WCs are flushed using lake water, and wastewater is treated using a reed bed before being released back into the watercourse.
BREEAM innovation credits are expected for the daylighting design, low-carbon technologies and smart water metering, which should help it attain its BREEAM “outstanding” target.