In this time of austerity, Caruso St John’s extensively reconfigured Tate Britain is a considerable achievement considering its dependence on public funding. 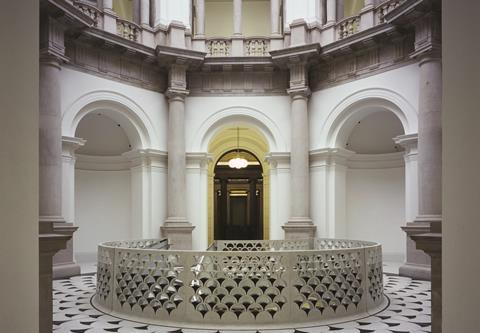 There is a perception that the heady days of rampant construction activity within the cultural sector are over. The dawn of the new millennium, when it seemed as if every town or city had adopted a new or refurbished gallery or museum, is just a faint and distant memory. Instead we have a cultural sector diminished by the weight of austerity and a Department for Culture, Media and Sport forced to bear some of the most savage cuts in funding dispensed to any government department in the 2010 spending review.

But while there was undoubtedly less spending on cultural buildings in 2013 than 2003, this year still saw the completion of a number of landmark cultural projects. Liverpool and Birmingham were given sparkling new central libraries, Portsmouth’s iconic Mary Rose museum opened, and construction has proceeded apace on major extensions to the Victoria and Albert Museum, British Museum and the Tate Modern.

But it is the reopening of the latter’s elder sibling, up-river in Millbank, that arguably deserves the title of the most significant cultural project of the year. Caruso St John’s extensively reconfigured Tate Britain - the result of a seven-year overhaul - is almost a throwback to bygone times: a major national institution given a lavish, multimillion-pound renovation by a signature architect. But one key aspect of the gallery is a reminder of the more straitened economic realities that many cultural institutions are forced to face: only 5% of its £45m budget came from public funds, with the rest being sourced from private donations.