A lack of space means that many new schools in London are built within residential schemes and lack a visual expression of their own. A new model pioneered in Dalston gives the school its own distinct architectural identity. Ike Ijeh reports. Photography by Matt Clayton 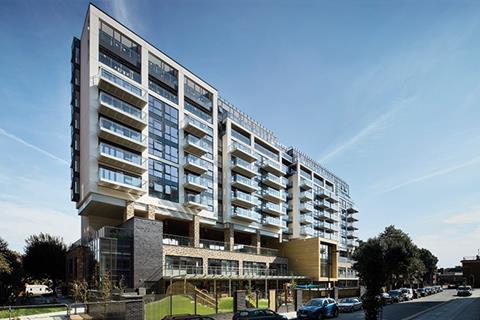 London’s housing shortage is well publicised. But there is another vital infrastructure component in relatively short supply in the city: schools. According to London Councils, the apolitical lobbying group that represents London’s 33 councils, 133,000 additional school places will be needed in the capital by 2018, almost one third of the figure required for the whole of the UK.

There are obvious challenges to meeting this requirements. Cost is one. Then there are ideological debates over school type, particularly with the government’s support of the free school programme and the potential resuscitation of grammar schools. And, especially in dense inner London, there is a more practical concern: space.

With London property values at a premium, residential development takes commercial priority in the city, which adds to the squeeze on the already limited space for new schools. The architectural response to this has been the effective creation of a new typology, where schools are physically incorporated into larger residential blocks.

Several examples have sprung up across the city, including David Morley Architects’ 2015 Plimsoll Building in King’s Cross Central, where a pair of schools occupy the lowest two floors of a 14-storey residential block.

These new types of schools tend to be subsumed within the aesthetics of the surrounding residential block and are rarely given their own distinctive architectural expression.

But this is exactly what a rebuilt school in Dalston, east London, attempts to do. Holy Trinity Primary School is a newbuild scheme that replaced an older school on the same site and has been designed by Rock Townsend Architects.

As with the Plimsoll Building and several others, it occupies the lower three storeys of a residential block, in this case with seven storeys above. 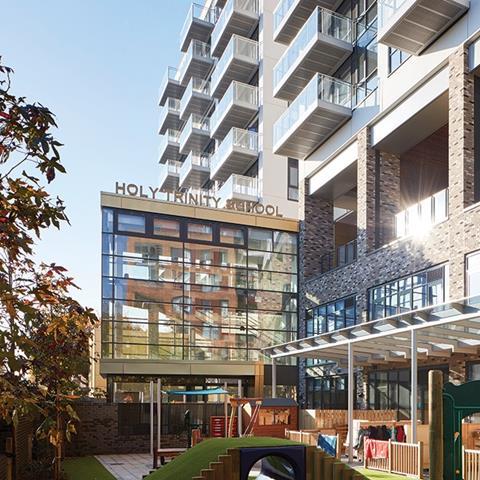 The new school sits below storeys of flats

Both the school and the flats were designed by the same architects as part of a project developed and built by Telford Homes. However, architecturally and in contrast to many previous combined schemes, Holy Trinity is expressed almost independently from the flats above, with its brickwork facades and its pair of projecting copper clad bays operating in stark contrast to the aluminium cladding applied to the higher residential facades.

“We wanted a more textured material for the school,” explains Rock Townsend director Mark Gabbey. “We also wanted to forge a stronger relationship between the school and both the local community and surrounding area, which is of a more domestic character and is also characterised by brick buildings.”

The school is not entirely architecturally independent from the flats. Both entities are strictly rectilinear in form. Both facades also conform to a pattern of horizontal bays with large glazed openings

However, there are key differences. As well as materials, the projecting copper bays are key architectural features for the school and, in one instance, mean it is directly aligned with the axis established by the original, gabled neo-gothic Trinity School opposite. The flats are set back from the curtilage of the school below. Crucially, the school’s elevational bay arrangement is deliberately based on a different grid to that of the flats, leading to a conspicuous and somewhat awkward junction between the two. 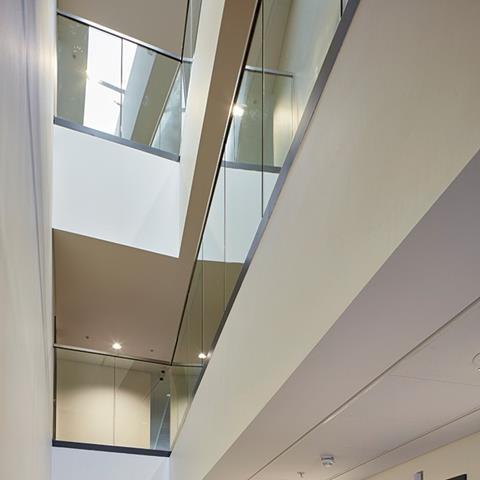 Yet this junction is significant because it marks the point of the biggest architectural divider between the school and flats – the second floor outdoor play space that is expressed as a pair of open decks. These double-height play spaces occupy nearly all of the building’s third storey, and are encased within columns that run along its perimeter.

Structurally, they mark a clever device to separate the structure of the flats from that of the school. A substantial structural transfer slab runs above the deck, thereby enabling the internal layout of the school to not be defined by that of the flats above. The fact that the flats’ two cores are placed at either end of the block and deck also help achieve this aim.

The deck level has even more resonance when it comes to architecture and function. “It helps clearly identify a gap between school and flats,” explains Gabbey. “It also ensures that we maximise outdoor play space. The alternative would have been squeezing the play space around the building at ground level, which would have never resulted in the required amount of space.”

Despite these lofty ambitions, the deck proved hugely contentious in planning terms. The school was initially denied permission, partially on the ground of its height and bulk and also because Hackney’s design review panel were convinced that the play deck offered pupils only a dark, sunken space starved of sunlight.

The issue of height and bulk seems unreasonable, given that the block is next to John McAslan + Partners and Barratt Homes far bigger Dalston Square development over the new Dalston Junction overground railway station.

Much of the opposition also emanated from the professional classes who had moved into Dalston Square, an exemplar of the tidal wave of gentrification that has dramatically changed formerly deprived Dalston in recent years. Such community conflicts are becoming increasingly common in hyperdeveloped London, where some incoming residents seek to deny the established community the same transformative construction that secured their own new accommodation in the first place. 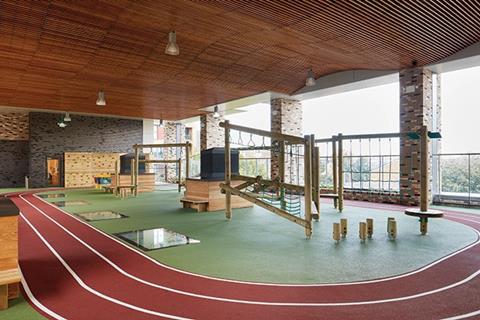 The opposition to the play deck cuts to the heart of our cultural and environmental expectations of school design and how these can clash with the pressing urgency of providing more school places in dense, inner city areas.

“The quality of the space was very difficult to convey,” concedes Gabbey. “Yes, we can have models and visualisations but, sometimes, we as architects have to ask people to have faith that this will work and often, understandably, that’s a very big ask. But we were convinced that this would work and that it was only way to achieve our aim of maximising play space on the site.”

The impasse was broken by former mayor of London Boris Johnson. Trinity School was one of the multiple schemes he called in during his tenure. Johnson’s call-in legacy has been deemed to have been weighted overwhelmingly in favour of the developer over local character, community or, for that matter, local democracy. In this case, however, Johnson seized on the proposed school as a “genius, pioneering and clever proposal [that] tackles the need to provide more housing and more primary school places”, and the council’s refusal was overturned.

And what of the quality of the elevated play deck that was at the heart of council opposition? As built, it is a thrilling and dynamic space and Hackney’s design review panel would do well to return and revaluate their opposition.

Gabbey is keen to point out that “sunlight and daylight are two different qualities” and, while the panel’s fears over limited sunlight could be justified in certain conditions, throughout the day the double-height space benefits from generous daylight and expansive views over east and central London. Ironically, these offer pupils an even greater sense of connection with the local area and wider city than would have been the case had the play spaces been on ground level. 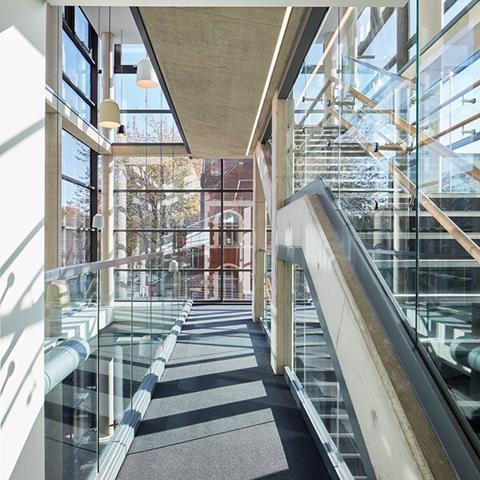 The original Holy Trinity School, now used for other purposes, can be seen through the glass facade of the new building

The play spaces also have functional purposes. Their undulating timber soffits help break the rectilinear geometry present throughout the building. Planting and soft landscaping is arranged around all manner of seating, play apparatus and raised decks to provide an animated, stimulating environment. One deck features a running track and the other includes a series of glass rooflights embedded into the surface can be walked across and allow daylight to enter into interior spaces.

The rooflights are particularly important as they help bring natural light into the centre of the deep plan. The school interiors themselves are simple and robust, with conventional white walls and large classroom windows. The plan does well to avoid the long institutional corridors the site’s elongated footprint might have imposed and introduces a kink in geometry at the centre to subtly splay an otherwise orthogonal internal layout.

It is the decks and the role they play in expressing the unique identity of the school that most dramatically expose the building’s underlying design concept. It is these elements too that offer the most compelling precedents for how schools can exploit London’s housing boom to embed themselves into the limited space offered by the capital’s dense inner city context.

The school therefore represents an assertively urban response to a complex urban problem and it is Gabbey who sums up its legacy best: “Rather than a shy school that is submissive to the housing, it is a brave piece of metropolitan architecture that seeks to define a unique identity for both.”