Ecobuild and the Landscape Institute launched a competition for ideas on how to turn the Royal Docks into a green infrastructure space for east London. Ahead of the winner being announced at this year’s Ecobuild event, Thomas Lane reports on some of the top proposals

Former cabinet minister Lord Heseltine recently said if he had tried to predict the success of London’s docklands regeneration 40 years ago, he would have been carried off by men in white coats. He launched the amazing transformation of Albert Dock in Liverpool and the West India Docks in London, which became Canary Wharf. These areas have become buzzing commercial and residential hubs but the docks at the centre of these success stories have been left untouched and either reduced in size or left as big, empty swaths of dark, deep water that are hardly used by the developments’ occupiers.

The Royal Docks to the east of Canary Wharf are the latest waterside regeneration hotspot. The Siemens Crystal recently opened at the west end of the Royal Victoria Dock just after the new cable car connecting the area to Greenwich Peninsula started operating. Last year London mayor Boris Johnson announced a series of initiatives, including a £1bn deal to turn a 35 acre site at Royal Albert Dock into a commercial and trading gateway for Asian and Chinese companies and a space for brand pavilions in Silvertown.

This redevelopment of the Royal Docks is the perfect opportunity to bust the deserted docks model. The Royal Victoria and Albert docks cover 90ha and with some vision could be turned into an amenity and development space which would benefit locals and help attract investment to the area. This could include a range of functions including water activities, parkland and development space. The docks could also help attenuate water flows in and out of land-based development to mitigate the risks of flooding.

Ecobuild teamed up with the Landscape Institute to launch an ideas competition to transform the Royal Docks into a new green infrastructure space for east London.
This initiative is supported by the mayor of London, Newham council, Open City and landscaping products manufacturer Marshalls. The competition attracted over 60 entries from all over the world including from Arup, Gensler, Studio Engleback and from students. These were whittled down to a shortlist of 20. The entries included grand masterplans for the whole area and moving the river Thames, down to small-scale initiatives focused on one area. Below we pick out the spectrum of ideas that were presented as part of the entries.

The abundant space in the Royal Docks creates plenty of opportunities for leisure areas, including parks, such as the example on the left, Silvertown docks, urban forests, play areas and even artificial beaches. Many entries included opportunities for water-related features, such as new marinas and areas for diving, swimming and canoeing.

The most ambitious proposal was put forward by Jason King Architects, a German practice. This was to move the Thames so it flowed through the Royal Docks. The plan would involve moving London City Airport to the south of King George V dock. The old river bed would be used to create a green space bigger than Hyde Park.

As the Royal Docks occupy nearly 250 acres, there is plenty of room for development without diminishing the aquatic qualities of the area. The mayor has already launched proposals for a 15-acre floating village at the western end of Royal Victoria Dock which leaves plenty of room for other schemes.

Many entries included floating development. One called Sensory Docks proposes flood-proof houses on stilts that float up and down with the water level (below). The entry Project Float, suggests a modular, clip-together system comprising 5m square by 1m deep plastic floating units. These can be used to create islands of varying size which are topped by a variety of materials including soil for plants, hard surfacing for paths or lightweight timber buildings. 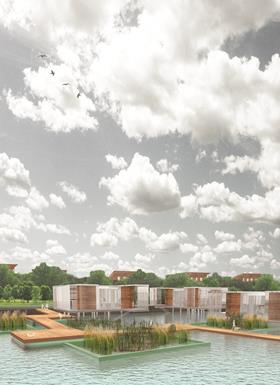 Transforming the docks into a green and pleasant land is pointless if people can’t appreciate it at close quarters. One solution is a network of broadwalks such as the one proposed for Albert Island, a park at the east end of Royal Albert Dock.

This zig zags through the park enabling people to enjoy elevated views and connects the island to the north and south side of the dock.

Several entries incorporated improvements to the docks into a wider vision for the whole area. These masterplans included residential and commercial development, water management, green infrastructure, transport and leisure. It makes sense to consider the area as a whole as this means occupiers and residents will benefit from properly integrated infrastructure, which is much harder to achieve with a piecemeal approach.

The downside is that realising a grand vision is much more difficult as it requires disparate stakeholders to agree and fund it. This entry “A landmark for living” from Gensler (above) is an example of the grand response - it proposes to turn London City Airport into an international transport hub with high-speed rail links to Canary Wharf and the City, new business and mixed-use areas, and leisure facilities including a marina, a rowing course on the docks and a water sports centre.

It also proposes a water channel on the east side of Royal Victoria Dock to help manage water flows more effectively, as well as urban farms and wetland areas in the docks, including a central park around London City Airport runway. There are green walls through the area, and a green bridge connects the Royal Docks to south London. 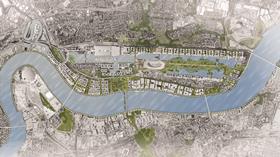 Surprisingly few entries addressed the direct connection between land and water in the docks. Valentina Ticino’s entry, 3 Systems, proposed a network of water channels extending from the docks into dockside development to control flooding.

Baharash Architecture’s entry Water Boulevards (above and left) took this idea one step further by using water channels as a focal point for new development. The channels would be created as a linear series of swales, reed beds and ponds, with new development, cycle paths and bus routes built alongside. The water boulevards would provide routes through the development, control flooding and provide a green, attractive space for local residents and workers. 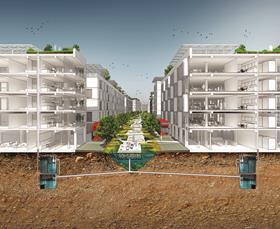 Nearly all the entries included creating wetlands in the Royal Docks. The large volume of water and the proximity of the river Thames make them an ideal area for wetland creation.

Wetlands are attractive to look at, encourage biodiversity including birds and mammals, and can help cleanse polluted water. The ratio of water to land will vary according to tidal variation, creating a changeable landscape.

Some of the entries including “Albert Island”, right, suggested swales - water channels - for growing willow which can be used for biomass, others proposed reed beds for cleansing water. Andreas Boden and Malan Í Jákupsstovu’s entry Silvertown Wetlands proposes turning green areas between the docks and the Thames into wetlands criss-crossed with paths, enabling residents to enjoy this natural setting.

Bethany Gale and Sarah Tolley’s entry centres on Silvertown Docks, a redundant graving dock for repairing boat hulls. This features deep berths around the dock perimeter which would be transformed into four different habitats ranging from submerged plants to wet woodland.

The presence of several large undeveloped sites within the Royal Dock area was a catalyst for a more focused approach. The disused Silvertown Docks was reworked into a new quarter by several entrants using many of the elements in the bigger masterplans for the whole area.

Albert Island is sandwiched between the entrance locks from the Thames to Albert and King George V docks and is almost deserted. An ambitious submission by B|D landscape architects (right) Albert Island proposes creating an urban park complete with orchards, wetlands, broadwalks, play areas, a market and a cluster of floating gardens on the eastern side of the island.