2014 was notable for landmark buildings coming to completion. In the first part of our look back at six completed projects that impressed, we feature Rogers Stirk Harbour + Partners’ Leadenhall Building ad Ryder Architects BIM-driven internal reordering of Manchester Library… 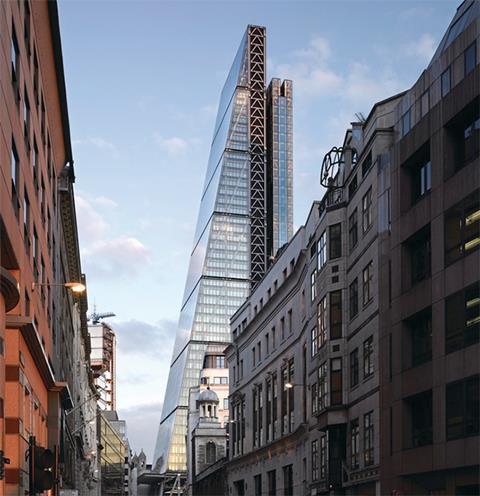 The completion of Rogers Stirk Harbour + Partners’ Leadenhall Building, irreverently nicknamed the Cheesegrater, crowns an important year for a practice which has unveiled two of London’s most important and hotly anticipated projects (the other being the extension of the British Museum). The Leadenhall Building, built by Laing O’Rourke, is something of a milestone for the capital too, at 225m and 51 storeys high, it overtakes the Heron Tower (minus the latter’s spire) to become the tallest building in the City of London and the third tallest in London. It is also one of the City’s more distinctive high-rises, in the spirit of the Shard and, unlike nearby 20 Fenchurch Street (the vulgarly incongruous “Walkie-Talkie”), its chamfered profile provides the elegantly tapering, spire-like form commonly devised to minimise the impact of tall buildings in historic areas. This contextual empathy is also evident in the tower’s facades. Gone is the mechanistic aggression of Rogers’ earlier Lloyds Building opposite; here, theatrically exposed structural cross-bracing is sheathed behind a stunning glass veil that encases the entire building. The veil is only stripped away at the lower seven storeys into which RSHP has inserted one of the City’s most dramatic public spaces, a powerful civic riposte to the public but paid for access now commonly offered at the top of London skyscrapers. But for all its innovation the tower does nothing to quell the ongoing debate over tall buildings in London, as its awkward incursion onto the famous St Paul’s vista along Fleet Street demonstrates. There was also cause for red faces in connection with the project in November when two bolts fell from the structure. Developer British Land is set to publish the results of an investigation into the incident in the new year. 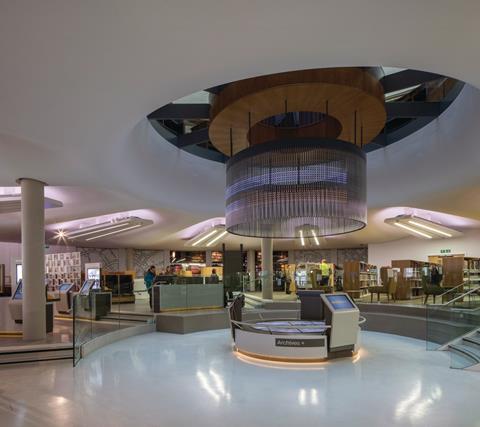 The completion of Manchester Library’s refurbishment by Laing O’Rourke represents the culmination of a long period of restoration and renewal for one of Manchester’s most important civic buildings. Externally, the original Grade II-listed thirties block by Ministry of Defence HQ architect Vincent Harris was an imposing piece of inter-war neo-classism and its rotunda profile is one of the most recognisable in the city. But the interior was defined by a warren of rambling rooms and corridors. All of which have now been re-ordered by Ryder Architects to create a modern, light-filled interior that combines new intervention and lovingly restored historic features. The project was also significant for its use of BIM technology during the design and reconstruction period and serves as a template for how BIM can assist the restoration of complex buildings while also representing Manchester council’s adoption of BIM across its estate management department. But the enduring legacy of Manchester Library is a civic one. In a year where all six Stirling prize nominees were buildings with a strong civic presence, it too represents a new dynamic age of restoration and reinvention for Britain’s civic buildings.