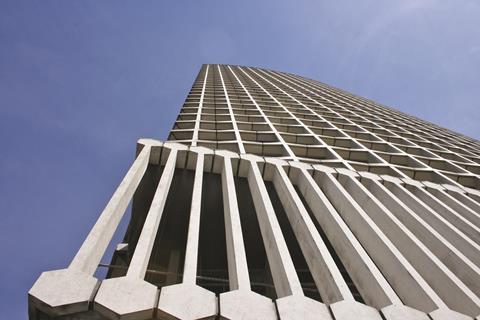 One of the most hotly anticipated conversions of recent years will finally be unveiled in early 2018 when Centre Point reopens as a luxury residential tower. The grade II-listed 1966 office block is arguably prolific post-war architect Richard Seifert’s most famous building and has become revered by some as an iconic symbol of 1960s pop art and culture. As a brutalist high-rise tower, albeit one that wears its brutalism lightly, this is a remarkable achievement.

Despite its notoriety, Centre Point has endured a plethora of problems in its relatively short lifespan including a protracted unoccupied period, inefficient floorplates, single glazing and a woeful public realm. The redevelopment aims to address at least the last three of these issues and the new residential format promises to belatedly make optimum use of the building’s famously thin plan and its relatively low floor-to-ceiling heights. New public spaces are also planned for the base, which has been redesigned in conjunction with the Tottenham Court Road Crossrail station above which the 33-storey tower stands, which is set to open at the end of the year. 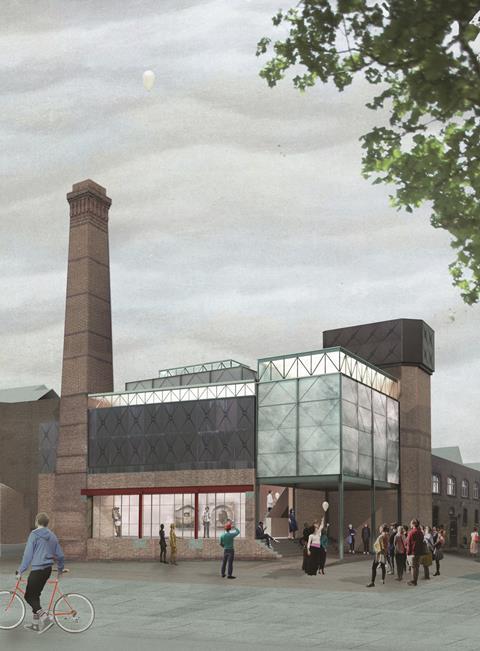 When young architecture collective Assemble won the Turner Prize in 2015, they were the first non-artists to do so and, perhaps understandably, caused some consternation in the art world. Even more so because their winning entry – the community-led regeneration of four streets in a deprived suburb of Liverpool – appeared to prioritise pragmatism over art, or at least more pointedly the arts market.

Well, if any noses were put out of joint, the practice’s key project completion of 2018 – its biggest scheme to date – promises to redress the balance. Goldsmiths is an internationally renowned art college that numbers artists Damien Hirst and Antony Gormley among its alumni. The Centre for Contemporary Arts project repurposes a former Victorian bathhouse to provide a series of gallery spaces, with a new-build double-height project space at the heart of the scheme.

In a year low on major London cultural venue openings, when Goldsmiths Centre for Contemporary Arts opens in September it could provide an eagerly awaited artistic showcase for the creative innovation talents of architect, client and users. 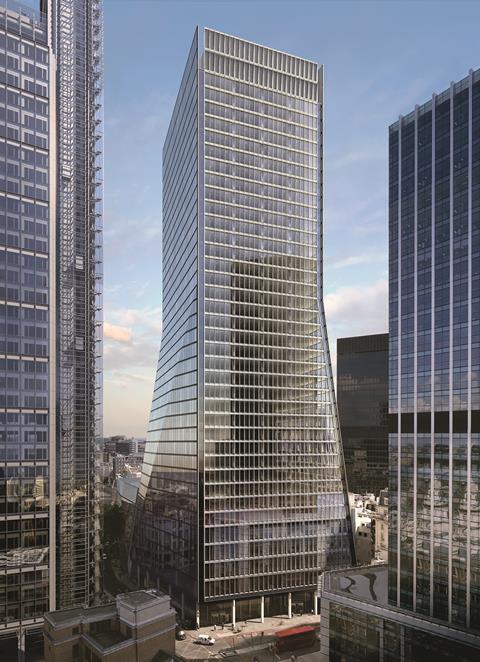 This year London will be awash with tall building completions. Away from the City, Simpson Haugh’s controversial and much delayed 52-storey One Blackfriars tower will open in Southwark. In Islington, Foster + Partners’ 42-storey Carrara Tower will also complete early in the year – another entry in the tall building corridor that is edging up City Road.

Not to be outdone, the City will also see a clutch of new skyscrapers join its increasingly chaotic skyline in 2018. KPF’s 38-storey Scalpel will rise in the shadow of the Gherkin. And on the other side of the Gherkin, Allies and Morrison’s first contribution to the City’s tall buildings scrum will complete in the form of 100 Bishopsgate, a 40-storey tower for Brookfield Multiplex.

The tower’s form eschews some of the more frenetic object-making that has characterised City skyscrapers in recent years and instead opts for a simple rectilinear box of folding planes and stacked horizontal lines. As City towers go, it marks a welcome injection of visual restraint and simplicity. 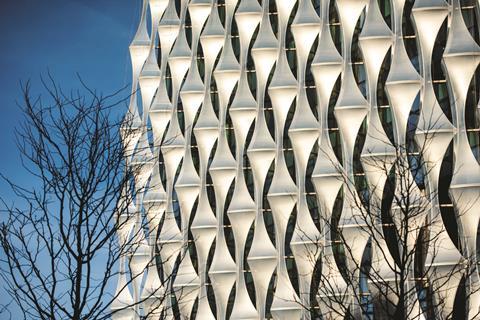 While the prospect of a Donald Trump state visit to the UK this year has prompted liberal apoplexy in some corners of the country, another likely UK presidential engagement has passed by largely unnoticed. The much-delayed opening of the £800m US Embassy in London’s Battersea has now been confirmed for late January. For the world’s most expensive embassy in the capital of its key ally, as well as the biggest diplomatic consulate the States has ever built, the US commander-in-chief is a natural invitee to the opening. Trump hasn’t confirmed attendance but if he does cut the ribbon, he will undoubtedly overshadow the completion of a remarkable chapter in London/US diplomatic history.

Moving the embassy to the vast Nine Elms regeneration site was a bold move. The embassy has a long history at its current site in Westminster that stretches back over 150 years, and Battersea has no previous diplomatic connections – although the Dutch and Chinese embassies are now though to be considering undertaking a similar move to the area.

The current US Embassy building on Grosvenor Square in central London’s Mayfair, designed in 1960 by seminal US/Finnish architect Eero Saarinen, is set to be converted into a luxury hotel designed by David Chipperfield Architects.

The new site is set to open on 22 January. You can read Ike Ijeh’s US Embassy review here 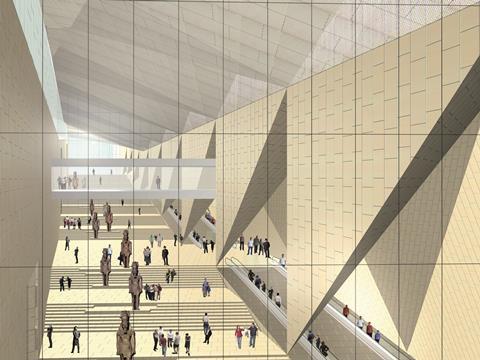 Antiquity informs us it took roughly 20 years to construct the Great Pyramid of Giza. So perhaps it is appropriate that it is likely to take approximately the same amount of time to build the landmark museum dedicated to the pyramids. The foundation stone to the Grand Egyptian Museum was laid in 2002, with the intention of the project being completed in 2013. But a damaging cycle of recession and revolution over the past decade meant the completion has been successively delayed, with even this year’s opening only a partial one.

But the delay should not obscure what remains a project of staggering ambition. Covering more than 5 million ft2, this will be the largest archaeological museum in the world and is set to house more than 100,000 artefacts from the Pharaonic period. At a cost of almost $1bn (£750m), it has almost doubled in price from initial estimates. European involvement comes in the form of architect Heneghan Peng and engineers Arup. Together, they have crafted an extraordinary building whose vast galleries and rugged geometries aim to capture the majestic scale and aura of the iconic monuments it commemorates. 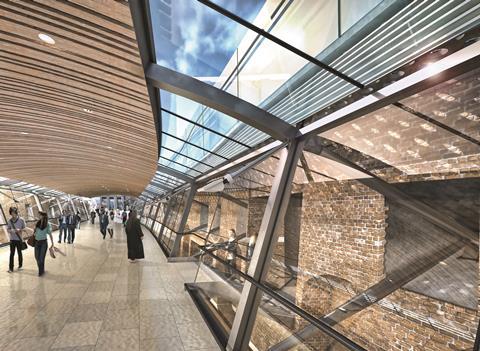 After more than half a century of planning, decades of political procrastination, 73 miles of new and upgraded track, 40 new or expanded stations, 26 miles of new tunnelling under central London and £15bn of public-private investment, Europe’s largest infrastructure construction project is finally set to open this December. It is difficult to overstate the importance of this event in both historic and construction terms.

There have been periods when it seemed Crossrail would never happen. Additionally, a construction project on such a massive scale has provided a rare and vital opportunity for modern engineering to mirror the seminal scale, impact and ambition of Victorian infrastructure expansion. While this should become more evident once the line opens, over the past few years clues have been successively unveiled in the phased completion of individual elements such as Foster + Partners’ Crossrail Place in Canary Wharf. The full line, including the critical Heathrow spur, will not open until 2019. But the opening of the central London tunnels and stations this December will crystallise Crossrail’s completion in the minds of millions. It is also likely to galvanise plans for Crossrail 2, which should it proceed is likely to ape the glacial timescale of its predecessor by opening in the late 2030s at the earliest. 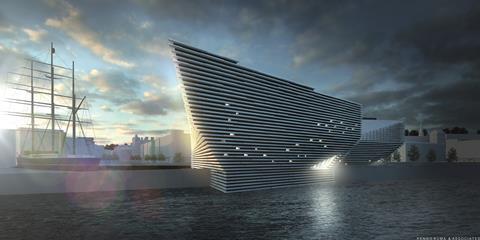 When the V&A’s Dundee outpost opens this summer it will be Scotland’s first museum exclusively dedicated to design. It will also be the V&A’s first museum outside London and the UK’s first national design museum outside the capital. The venue will also hold international significance as the first ever UK commission of celebrated Japanese architect Kengo Kuma. Kuma has also designed the Olympic stadium for Tokyo’s 2020 Olympic Games and, while Dundee is obviously an entirely different project, both buildings illustrate Kuma’s adoption of Japan’s naturalistic design tradition as well as his own trademark sensitivity to surroundings.

With its jutting and serrated concrete exterior perched right on the edge of the River Tay, the V&A Dundee is inspired by the nearby rugged cliffs of north-east Scotland’s coastline. Delivering this ambitious vision has itself been a challenge: almost two-and-a-half thousand panels of cast stone panels are hung on concrete formwork to mimic the appearance of a cliff face, and each individual panel spans up to 4m with a total weight of 12,500 tonnes. At a cost of £80.1m, the budget is almost double original estimates. Nevertheless, when complete the new museum will undoubtedly be one of the highlights of UK cultural projects this year.