22 Bishopsgate, Lipton Rogers’ replacement for the long-stalled Pinnacle scheme, began with the structural gymnastics of putting a massive rectangular structure on top of the remnants of the earlier building’s slender oval base. Then it got complicated 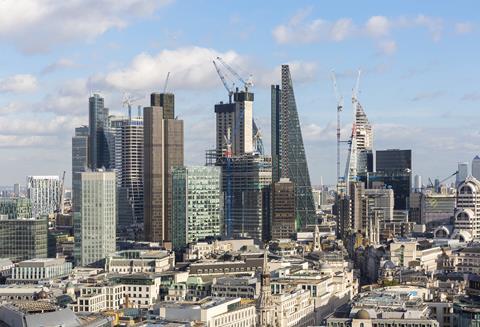 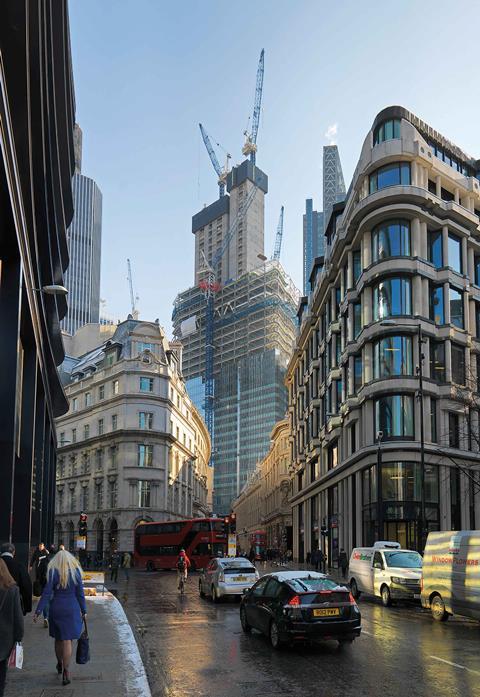 The cores are already towering above neighbouring structures and reaching level with the tops of some of the City’s tallest buildings. 22 Bishopsgate is built on the foundations of the ill-fated Pinnacle and some new piles, which called for some interesting structural gymnastics

At 41 storeys up, the two jump-form rigs currently forming the giant concrete core of the 22 Bishopsgate tower are the latest addition to the City of London skyline. Already level with the tops of some of the City’s tallest buildings, the rigs still have another 20 floors to climb to complete the core of what will, at 278m high, be the second-highest building in Europe, after the Shard.

Developed by Lipton Rogers, 22 Bishopsgate is being built at the heart of the City’s cluster of tall towers on the site that was to be occupied by the tapering Pinnacle tower. The Pinnacle’s construction came to an abrupt halt in the financial crisis of 2007. According to Peter Rogers, partner and co-founder of Lipton Rogers, the subsequent financial austerity and puritanism that followed the crash meant the market no longer wanted such corporate ostentation, a criticism that cannot be levied at its replacement.

Now marketed simply as Twentytwo, the giant tower is far more restrained than that of its slender predecessor, the Pinnacle, and its smaller, more flamboyant City neighbours including the Gherkin and the Cheesegrater. “Because of the financial crash, we took the view that no one wanted iconic buildings so this scheme is about getting a classic American-style, big floorplate building into the City of London,” says Rogers.

To make 22 Bishopsgate stack up commercially, Lipton Rogers worked with PLP Architecture and engineers WSP to push the building’s floorplates to the limits of the site boundary and in so doing succeeded in squeezing 30% more lettable floorspace onto the constrained site. “We’ve pushed the building out to the absolute boundaries of the property line; there is even a little bit of over-sailing of the street here and there,” says Rogers.

In addition to its huge, 87.5m x 38.8m floorplates, the tower has been given additional commercial appeal by a lift strategy developed to enable occupants to board a lift on the ground floor and to ascend to any office floor without the need to transfer. This means that the building’s 14m wide, 50m long concrete core has had to incorporate 35 lift shafts at ground floor level. “We’ve ended up with a humungous rectangular central core,” Rogers says. 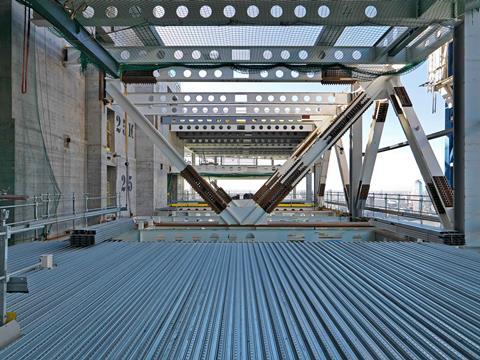 22 Bishopsgate is being built by Multiplex. The same hard-nosed commercial ethos that was behind the tower’s design is also applied to its construction. “The contract is effectively CM at the front end and then a lump sum,” says Rogers. It is an arrangement that has enabled the team to use specialist contractor expertise from the outset to rationalise elements of the design to ensure the most cost-effective construction solution is adopted. “Almost before we’d won the job we went out to buy all of the major packages with Multiplex to get them [the specialist suppliers] to engineer the job,” explains Rogers.

To speed the build and to minimise costs 22 Bishopsgate has been designed to incorporate virtually all of the existing below-ground structure built to support the Pinnacle; this includes three levels of basement and a raft slab supported on over 70 piles which extend up to 50m into the ground. “Ripping out the Pinnacle’s big piles and raft would have been a humungous job, which was not worth doing,” says Rogers.

The challenge for engineer WSP is to stand the giant 22 Bishopgate structure on top of the subterranean remnants of the the Pinnacle’s slender oval base. Rogers outlines the task: “If you take a piece of paper, draw an oval in the centre, dot the oval randomly with a pen to represent the existing piles, then put a larger building with a regular column grid above, that is what we’re dealing with – it’s bloody complicated in parts with some quite interesting structural gymnastics,” he says. 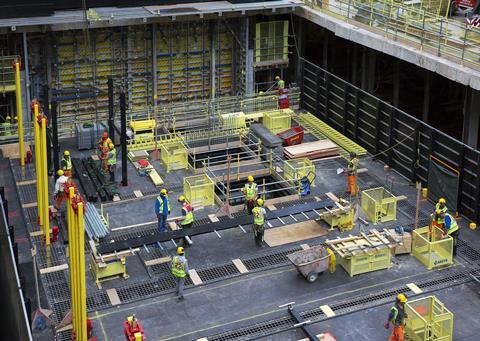 The twin cores are built using jump-form construction. The Multiplex-designed, fully enclosed rigs feature two decks with most of the work taking place on the lower deck. This image shows the rigs coming out of the ground

Piling on the piles

The gymnastic routine was developed by Ross Harvey, technical director for structures at WSP. His structural solution uses every pile already in the ground – not only the 70-odd piles installed to support the Pinnacle but also the under-reamed piles that remained buried beneath the site from the Pinnacle’s predecessor, 38 Bishopsgate. However, even using all the existing piles, the scale of the new building meant that some additional piles had to be installed together with a series of 13 transfer beams to shift the loads from the huge building to where they can be dealt with effectively in the ground.

In May 2015, while the design was being finalised, construction commenced with demolition of the Pinnacle’s nine-storey concrete core, disparagingly known as the Stump, and the only element of its superstructure to have been built. The Stump’s demolition created an opening through the ground floor slab and down to the basement raft. Supported on the existing piles and existing raft slab, this newly created opening allowed the northern jump-form rig to be assembled and to start its journey upwards. “The large cut-out enabled us to build a new blue-sky core going up,” explains Harvey. 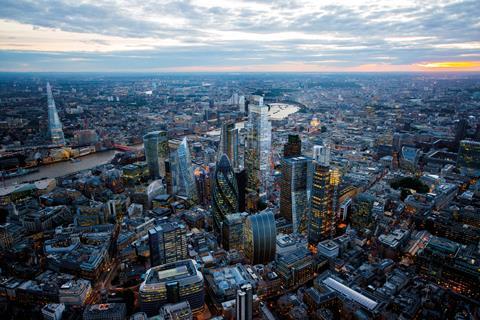 Visualisation of the finished building

The jump-form rigs being used on 22 Bishopsgate are a Multiplex design, developed on its projects in the Middle East. The double-height rigs are fully enclosed and are formed of pre-assembled elements including the two platforms attached by a series of braced steel columns. On the upper deck are a series of electronic screw jacks and the concrete placing boom along with space for rebar storage. Almost all the work takes place with operatives working in the sheltered environment of the lower deck.

The jump sequence is: 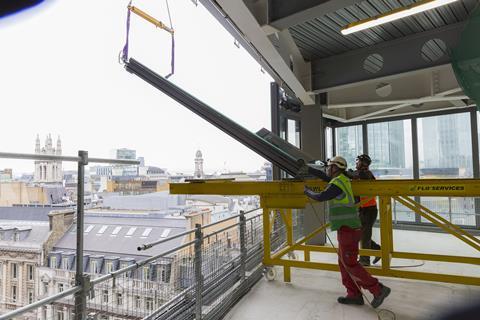 Concrete contractor Carey is constructing the building’s giant core using two jump-form rigs, one forming the core’s northern half, the other its southern half.

With the southern jump-form racing skywards, the race was on for Multiplex to install the piles and construct additional walls to support the core beneath the slab. “In collaboration with Multiplex, we worked out that the best way of building this half of the core was to use top-down construction so that we can do the piling at the same time as the southern half of the core is being constructed,” explains Harvey.

To install the new piles, part of the Pinnacle’s raft foundation had to be cut away and the upper level basement slab removed to enable 85 additional 1m diameter piles to be driven into the ground using a Martello-rig, capable of operating in the restricted headroom in the basement. “We worked out where we needed to put in additional piles to enhance the existing [ones] because the new core is quite a lot longer,” Harvey explains.

The southern rig is leading the two jump-form rigs skywards. “We used jump-form [as opposed to slip-form] for speed, safety and security and to control quality,” says David Miller, Multiplex’s construction director. The rigs are impressive; designed by Multiplex, they are fully enclosed, self-propelled workspaces, like two mini concrete factories rising into the sky. “The jump-forms are effectively standalone; the only lifting needed is reinforcement, so crane dependency is minimal,” says Miller (see Jump Leaders, previous page).

Having the same jump-form system on the two cores has allowed concrete contractor Carey to migrate operatives between the two to maximise efficiency: when the reinforcement team is working on the southern rig the shuttering team will be at work on the northern rig. When the tasks are finished the teams swap. The jump-form cycle is a floor each week, with the jumps staggered by three days between the rigs to allow the teams to alternate. 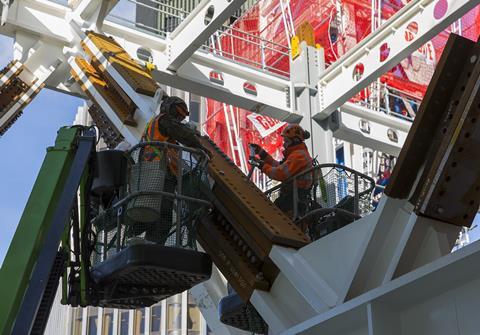 WSP had calculated that the ground floor slab from which the southern core had been launched would be capable of supporting the load from the new core on its five existing columns until the core had reached level 15. By that time Multiplex had to have constructed additional basement walls to ensure the core’s stability before it could continue its upward journey. By the time the rig reached level 20 all the new piles had been installed and a new section of the raft slab cast to spread the load over more piles. “Our biggest challenge was to wrap in the construction methodology and timeframe of when things needed to be built into our calculations so that we can calculate the load paths for the temporary conditions,” explains Harvey.

In addition to the downward loads, because the core is so slender on its east-west axis it requires additional structural support to keep it stable in high winds. This is provided by a series of three outriggers formed from giant storey-high trusses that link the concrete core to the steel structural columns that ring the building’s perimeter. Rogers explains the function of the outriggers using the analogy of an old person, arms outstretched, with a walking stick in each hand. “It’s a very efficient structure with a steel weight of just 85kg/m2,” he says, ever the developer.

The outriggers are installed on building’s two intermediate, double-height plant floors; the outriggers on level 25 are already in place, while those on level 41 will be installed later in the build. WSP had to work with steelwork contractor Severfield to agree the best way to divide up the giant trusses into sections small enough to be lifted by the tower crane while ensuring the connection points between were not put under excessive strain. “Twenty meganewtons will run through the trusses under full wind load, equivalent to supporting five fully loaded A380 Super-jumbo aircraft,” says Harvey.

Chasing the jump-forms skywards is steelwork contractor Severfield. Its task is to install the steel perimeter columns and the cellular beams to link them to the core. At the lower levels the perimeter columns are inclined to take the structure from the foundations, which do not extend to the site boundary, outward to the edge of the structure and then vertically upwards. “Between basement and level 7, we took all of the oddities out of the floorplates,” says Rogers. 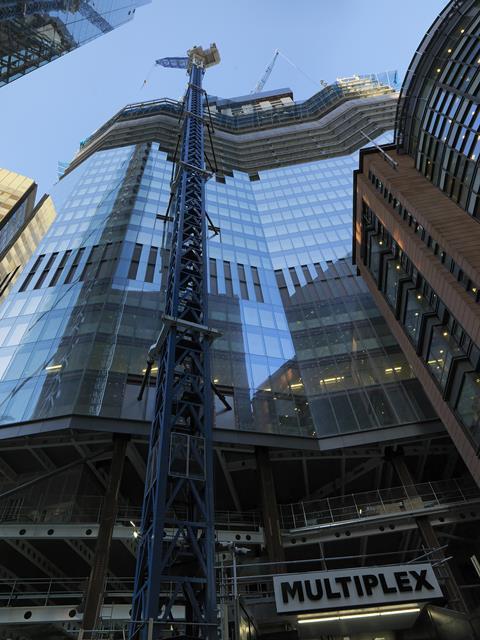 Once the cladding is installed, work begins on the fit-out at a rate of one floor per week

Five floors further below the concreting crew and cladding contractor Gartner (part of the Permasteelisa Group) is fitting the cladding to make the floors weathertight. The facade is a triple glazed curtain-wall system, comprising a sealed double-glazed unit and a single glazed outer-panel, with air circulated between the two panels.

Once the cladding is in place, two levels behind the procession of fit-out trades has already begun with MEP first fix. As the fit-out picks up pace Multiplex will soon have trades working on each of the next 17 floors. Each floor has a 20-week fit-out from first fix MEP to completion and locked doors. The programme is based on fit-out of one floor every week, so ever week the procession jumps up a floor fit-out begins again.

If all goes to plan, London’s latest and most restrained landmark will open in July 2019.