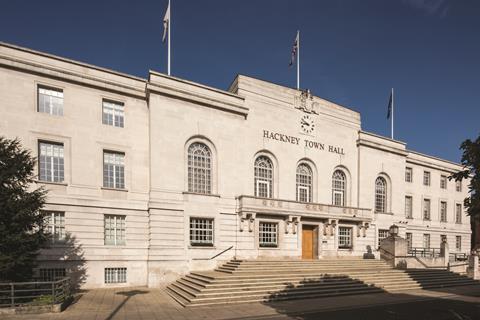 When Hackney town hall opened in 1937, mayor of the borough Henry William Butler called it “that great dignified centre of public life”. Civic life was a powerful ideal in pre-war public architecture, palpably demonstrated in the egalitarian bearing of the hundreds of town halls, public baths, libraries and courthouses built across Britain during this period. It was an ideal that easily straddled political divides: while it was a Labour mayor who opened the town hall, it was Hackney’s last-ever Conservative-controlled council that commissioned the competition for its design three years earlier.

Of all public buildings, it is town halls that offer the most stirring renditions of local democracy and civic pride in action – and few do it better than Hackney town hall in east London. The building was designed by architect Lanchester & Lodge in a version of art deco so cool and tempered that it borders on neoclassicism. Like the best town halls, its grandiose council chamber, vast assembly halls, symmetrical composition and whitewashed palatial character combine to offer a superlative example of the principle of parliament miniaturised to the scale of a postcode.

But as ex-Hackney mayor and current deputy London mayor for planning, regeneration and skills Jules Pipe explains, these principles did not stay untarnished for long. “At the turn of this century, Hackney town hall, like the rest of the borough’s civic infrastructure, was shabby and in need of investment […] It was clear that this once state-of-the-art building […] should undergo the same renewal as the borough in which it has now stood for 80 years.” 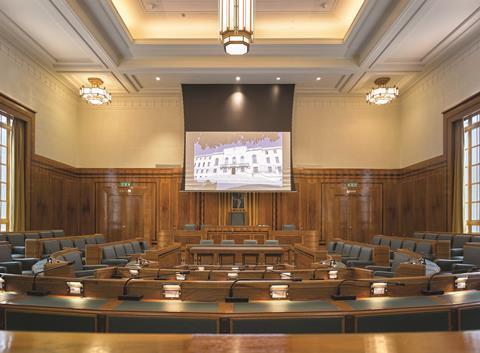 The building is renowned for its horseshoe council chamber, which has recently been restored 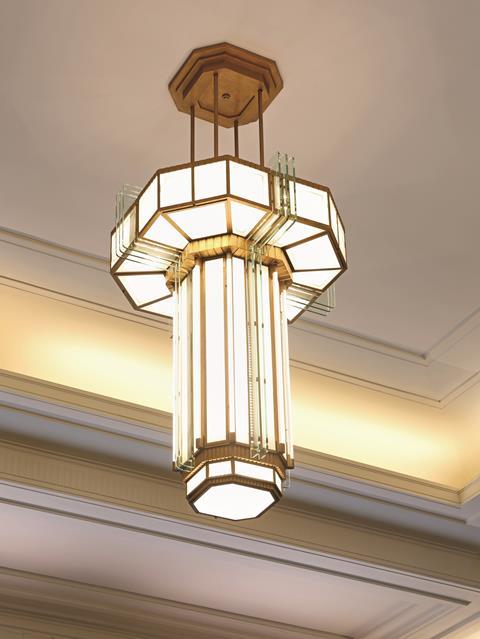 The building’s art deco detailing has also been restored

A 12-year programme of restoration

That renewal has come in the form of an exhaustive 12-year restoration and refurbishment programme by architect Hawkins Brown, just recently completed and throughout which the building remained fully open. Hawkins Brown has form in both this sector and the borough; founding partner Russell Brown is a local resident, and the practice has worked on scores of Hackney projects, including the mammoth Woodberry Down regeneration. It also completed the much-lauded £5m refurbishment of nearby Stoke Newington town hall in 2009 and Barking town hall in 2005.

Russell Brown summarises the refurbishment approach adopted at Hackney, as well as the practice’s other historic town hall projects, as follows: “We’ve brought old, beautiful buildings back to life by integrating new facilities like energy-efficient heating and ventilation, IT and lift access into fragile listed buildings.”

At Hackney, this process was aided considerably by the fact that many of the building’s original art deco fittings and fixtures had been left intact, a circumstance that had nothing to do with its grade II listing. In the closing decades of the 20th century, Hackney council was infamous for political turbulence and chronic underinvestment, both of which meant there was no money to afford the kind of “modernising upgrades” that scarred so many historic buildings from the 1960s onwards.

“Basically it was so well preserved because nothing was ever done,” explains Chloe Marshall of Hawkins Brown, “but this, combined with a forward-thinking political will, meant the council was very open to new ideas and interventions.” 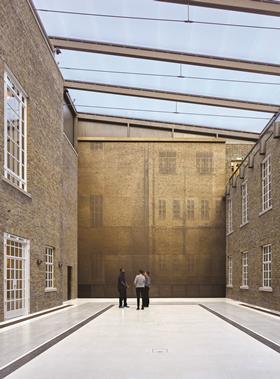 The “forward-thinking” approach is typical of a borough that has traditionally embraced progressive politics and alternative culture. In the 1930s Hackney’s stance of pioneering innovation prompted the installation of a whole raft of state-of-the-art technologies into the building, many of them still present today. Art deco was a product of the Jazz and Machine Age, and while it may have produced buildings that decadently invoked the temples of ancient Egypt, it also harnessed the latest in industrial design and engineering technology.

At Hackney this came in the form of features such as every clock in the building being centrally controlled and a central vacuum system that merely required cleaning hoses to be plugged into wall sockets – sadly, although understandably given its impracticability, no longer in use.

The latest interventions, to which Marshall refers, have produced a 66% increase in office space. This has been achieved by an efficient reorganisation of the building’s second storey, which mainly contains offices and what were previously service spaces. But it has also been realised by the skilful transformation of two former service courtyards into full-height covered atriums.

As the building is virtually symmetrical in plan as well as elevation, these two atriums mirror each other on either side of the building’s central spine. The Portland stone of the building’s external facades was never present in these spaces, and their exposed brickwork – now cleaned – reveals a distinctly more utilitarian feel. The brickwork is sensitively topped by a continuous new steel ring beam that supports a new ETFE roof spanned by secondary beams. Underfoot, the former service yard’s basement floor has been raised to ground-floor level to allow level access from the refurbished marriage suites, which now open onto the new atrium’s resin terrazzo floor. 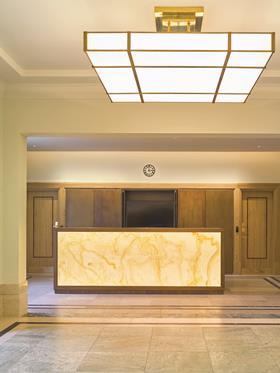 The atriums also play an important role in the circulation and energy efficiency of the building. A glass lift has been inserted, enclosed within a simple steel frame and, as Marshall explains: “with structure, machinery, and equipment minimised as much as possible to ensure that it has as discreet a visual impact as possible”.

Since all the atriums’ surrounding windows are now internal, louvres have been incorporated into the ETFE roof to allow the escape of any smoke that might enter the atriums in the event of a fire. In the most radical gesture, an entire four-storey wall at the eastern end of each atrium is completely covered by a full-height acoustic anodised aluminium screen. Only toilet and stair windows are concealed behind this wall, so it prevents no light from entering habitable rooms. But it does effectively shield the labyrinth of ducts and services required by the building’s new combined HVAC (heating ventilation and cooling) system. Cleverly, when viewed from the other end of the atrium, its multiple perforations also morph into a pixelated abstracted impression of the brick wall it now conceals.

Skilful as these new interventions are, the building at its heart remains an art deco masterpiece and it is the astonishing level of care and craftsmanship with which its original features and spaces have been restored that holds the visitor’s attention. Throughout the building lighting, panelling, flooring, upholstery, woodwork, ironmongery, walls and windows have all been lovingly and painstakingly restored to dramatically recapture the building’s original art deco glory.

The entrance lobby has been cleared of its 1980s clutter to form a clear and legible enfilade that unfurls theatrically from foyer to staircase in a sequence framed by layers of polished granite and gleaming brass light fittings. The vast assembly halls as well as the entrance lobby have been fitted with stunning new light fittings and chandeliers that vividly and faithfully recreate the trademark geometric choreography of art deco.

Arguably the most impressive room, the horseshoe-shaped council chamber is trimmed with richly lacquered oak panelling that conceals all manner of new ductwork, uplighting and integrated audiovisual equipment. Throughout the building, all single-pane Crittal windows have been replaced with slim double glazing.

Delivering this stunning recreation were an army of specialist trade craftsmen, whose involvement mirrored the multidisciplinary artistic collaborations so synonymous with the baroque and art deco styles. It is they who are largely responsible for the immersive, sensory experience that the restoration offers. 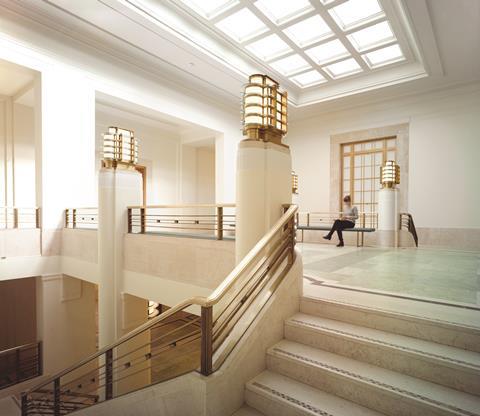 Many of the repairs demanded the application of ancient skills rarely required by today’s modern methods of construction. This included the committed work of French polishers, who – according to one of their number, Gary McQueen – are now “outnumbered by astronauts”.

His colleague Mark Horridge describes the process: “The panelling was in an appalling condition; you couldn’t see the grain and the workmanship, but now you can. We’ve stripped it all chemically by hand, which takes the lacquer off back to the bare wood. Then we repair the wood, removing blisters, and match veneer. Next it’s sanded and stained to bring out the depth of the grain, and finally French polished using shellac.”

Arguably an even more taxing challenge was how to replace damaged marble floors. The original marble was sourced from a quarry in Sweden in the 1930s. Rather than doing the same thing now and adding prohibitive expense to the project, the stonemason removed existing tiles and, with extreme care, sliced them in half horizontally, thus doubling the amount of tiles. Both the top and bottom half of the old tiles are then placed as the top layer of a new composite tile flooring, thereby maintaining the marble finish while ensuring the floor has the necessary depth and strength. 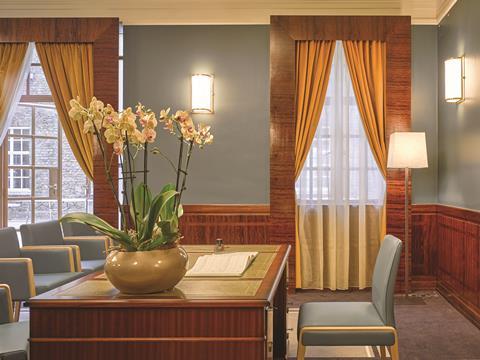 The restored marriage suite has concealed ventilation around the window frame

It is this kind of ingenious reutilisation of original fixtures that Hawkins Brown’s Marshall says mediated against the high costs commonly associated with specialist craftsmanship. Moreover, Marshall points out that “by making the building more energy efficient, by adding more office areas and by providing new lettable event spaces in the halls and atriums, the building becomes more efficient and cheaper to run. It also provides a powerful argument for councils investing in and retaining their buildings rather than selling them off.”

In these days of strained local authority funding, the last point is particularly resonant. But it also highlights the core ambition of the project, which is what Marshall describes as the “reinstatement of civic pride and the creation of a place that brings local people together”. Eighty years after it was built, this superb restoration convincingly resuscitates those 1930s civic ideals.