Despite engaging heavily with traditional build techniques – above all, for its striking perforated brick screens – the facade of University College Hospital’s latest addition is entirely prefabricated. Just what the doctor ordered, says Ike Ijeh 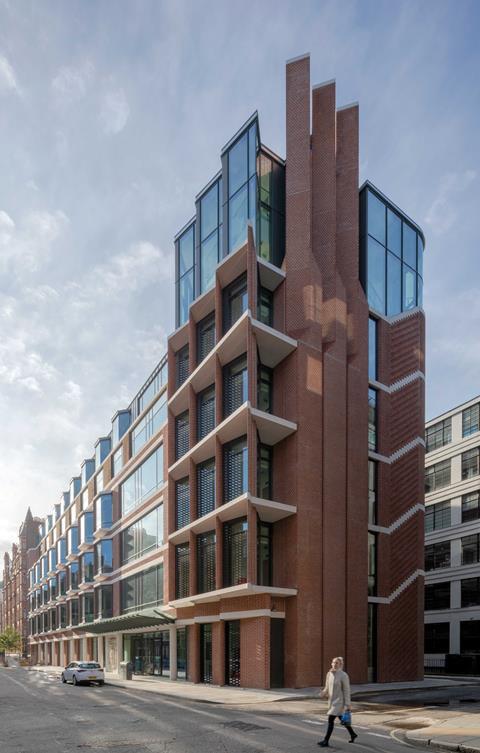 By their nature, hospitals are heavily internalised and intricately serviced buildings. So much so that less design priority is often given to the architectural composition of their facades than might be the case on other building types. The wave of PFI hospitals in the 2000s often unwittingly conformed to this theory, harnessing all manner of technical ingenuity and clinical prowess internally but often revealing themselves externally as bland, anodyne architectural containers.

The sprawling University College Hospital campus in Bloomsbury, central London, is certainly no stranger to this affliction and while its Alfred Waterhouse-designed core historic buildings are an excellent example of Victorian cruciform hospital design, the incongruous whitewashed slab facades of its 2005 Llewelyn Davies Yeang main block oppress their historic surroundings and are a shocking example of contextual insensitivity.

One of the biggest specialist facilities of its kind in Europe

But 15 years later, UCLH’s latest addition is out to make amends and sets a benchmark for how hospital facades can be sensitive and contextual but also conceived with the highest standards of contemporary construction and innovation. The new £67m Royal National Throat, Nose and Ear and Eastman Dental Hospitals have been relocated from their former Grays Inn Road buildings nearby to a new block on the southern end of the UCLH campus.

The £100m development will treat 200,000 outpatients a year and is one of the biggest specialist facilities of its kind in Europe. It also forms phase 5 of the hospital’s rolling regeneration of its estate. Like Stanton Williams’ recently completed wing of Great Ormond Street Children’s Hospital nearby, the new building also capitalises on the current healthcare organisational trend of ensuring that patient waiting areas benefit from daylight and views by placing them along the external elevation, with clinical rooms deeper within the plan.

But it is the facade itself that is perhaps UCLH5’s principal source of innovation and ingenuity. Designed as a separate envelope contract package by architects Pilbrow & Partners, the six-storey brick frontage offers 5.5m-wide bays that are a direct contemporary response to the local historic townscape of bay-fronted red-brick Victorian mansion blocks, key contributors to the character of the surrounding conservation area. Additionally, the facade is composed as a hybrid of traditional hand-made bricks, precast concrete aluminium and glass. 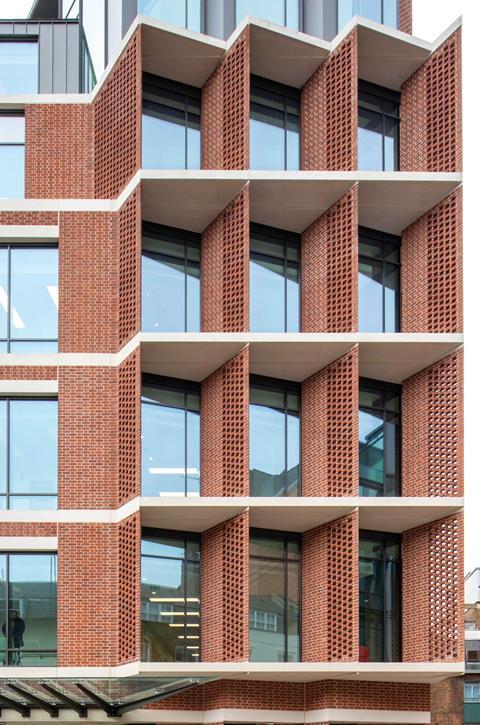 Traditional manual techniques were used to achieve colour and consistency on all 160,000 bricks and one of the facade’s most striking features is the perforated brick screens that form a distinctive design and decorative motif across the elevation. The screens are used most extensively on the south-facing third face of each window bay to provide solar shade and to ensure that the building has a more solid and less glazed appearance when viewed from the more historic streetscape to the south.

But what is most striking about the facade is that, despite engaging with traditional build techniques and historic townscape integration, it is entirely prefabricated. It therefore forms part of a growing sector of cutting-edge prefabrication innovations. Mace’s own Jump Factory system was used on two residential towers on the Olympic Park last year and its strategy of an enclosed and fully automated construction gantry “jumping” up the building shortened the construction programme by 18 weeks, required 20% fewer workers on site and enabled each floor to be constructed in just 55 hours. 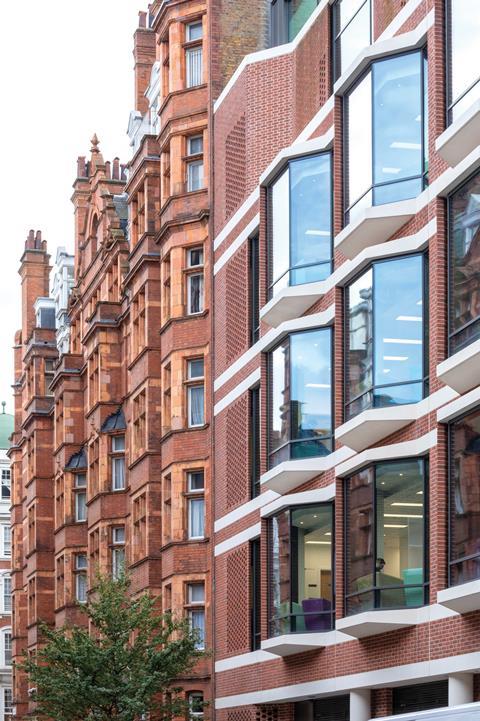 Similar benefits are realised here. By using prefabricated panels rather than hand-laid bricks, building the facade took 13 weeks rather than 40 weeks, crucially enabling the building to be watertight far more quickly than would otherwise have been the case. “It is not necessarily about building a building more quickly than would have been the case if an in-situ facade has been used,” says Pilbrow & Partners senior associate partner Simon Smith. “We are not saying that prefabrication reduced the overall programme. But what it did do was effectively remove a huge part of the construction – the facade – from the critical path, thereby enabling further efficiencies to be sought elsewhere. This undoubtedly makes the overall project more cost effective.”

So why was the prefabrication route chosen for the facade and how was it delivered? Pilbrow & Partners was brought into the project partially on the basis of practice founder Fred Pilbrow’s healthcare-related work on the nearby Francis Crick Institute when he was previously employed at PLP Architects. Initial plans involved a central core but some clever re-working of the plan moved this to the northern end so as not to complicate circulation in what is a very long and narrow floorplate.

At early design and planning stages prefabrication was never considered for the facade and, after winning planning permission,  the project proceeded through tender stages on that basis. Prefabrication was first mooted by Mace after it was appointed and Pilbrow admits to being a little resistant at first. “We had worked hard to create a carefully crafted building that responded well to the local townscape and where the brickwork had been carefully selected. The last thing we wanted was to evolve this into a building that looked modular with lots of [visible] joints and panellisation.”

But by carefully controlling the prefabrication process though extensive BIM modelling and embedding the same traditional, handmade brickwork qualities into the prefabricated system, the design team maintain that this has been avoided. The facade is broken up into 248 panels that mainly measure 5.5m x 4m. On average the panels weigh 9 tonnes with the heaviest weighing 11 tonnes. Most of the panels include the feature glass bays and perforated brickwork screen enclosed between precast concrete bands. The panels arrived on site with all these elevational elements already in place and were lifted into place on the facade by crane.

Up to five panels were installed in this way every day, but two challenges had to be overcome first. Because of the projecting bays the panels were front-heavy and there was a risk that they would buckle forward when they were being craned into position. So a bespoke jig was designed to carry the panel and compensate for the uneven distribution of weight across its breadth. 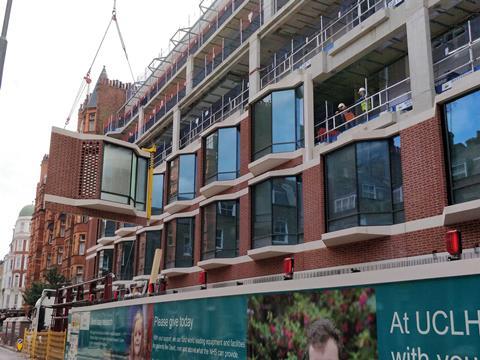 The second challenge concerned the construction of the perforated screens that appear across the facade and are used most commonly to veil one-third of the glazed bays, as Smith explains. “As the perforated brick screen could not be stuck onto the exterior wall like the rest of the panel, we would normally have set it within a frame. But a frame would have detracted from the continuity of the brickwork. So, rather than an obvious frame, a concealed ‘biscuit’ frame is inserted within the bricks to hold them all together. This is stuck to the brickwork with a resin glue bond so that the bricks are effectively self-supporting. But this, too, required a great deal of care, if the glue layer is too thick it fails so it is kept at a thickness of roughly 1mm throughout.”

Both Pilbrow and Smith are convinced that a key component of the success of the facade is the extensive BIM modelling process that took place before construction. Every single brick on the facade was modelled so that architects, manufacturers and subcontractors knew the exact number and configuration of bricks required. “It may seem onerous,” explains Smith, “but it was absolutely essential in order to maintain quality, certainty and confidence – the prefabrication process simply wouldn’t have worked without it.” 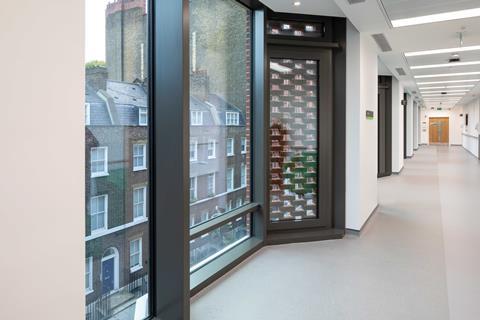 Pilbrow agrees. “It’s the ‘how’ rather than ‘what’ that matters. Fifteen years ago a project like this would have come with a hefty bill of quantities. But, if BIM is used well, it gives far better precision. The industry has been on a steep learning curve but, if the ultimate result is better buildings and prefabricated buildings that don’t look like prefabricated buildings, then it has been worth it.”

But in order for prefabrication to really take off, Pilbrow maintains that it is not just the digitisation of the design and construction process that is required but changes to procurement, too. “In order to leverage the best out of specialist subcontractors, they need to be involved right at the start of the process. Yes, this may require the main contractor ceding some control as specialist subcontractors are likely to play a bigger role for longer.

“It will also weigh the overall programme more towards the preliminaries stage. But at the moment we are trying to adapt the prefabrication process to fit traditional procurement routes. In order for prefabrication to really make an impact on buildings like UCLH5, it really needs to be the other way round.”