How do you start to rebuild a country devasted by war? When Mott MacDonald was asked to make a school for the Marsh Arabs, it went back to using traditional woven reed – reconnecting the community to its roots. 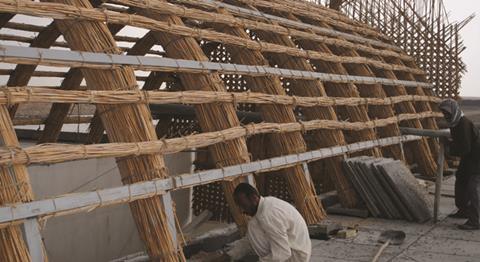 With its traditional reed-built roof and walls, this Iraqi school could have been built at any point in the last 200 years. In fact it is brand new and although local craftspeople had a big hand in its construction, the design and delivery of the project was down to UK-based engineer Mott MacDonald. When it was asked to build a tiny, four-classroom school deep in the heart of Marsh Arab country north of Basra, it saw the chance to break away from a monotonous diet of big infrastructure projects and do something special for this persecuted Iraqi minority.

Saddam Hussein persecuted the Marsh Arabs by draining the marshes, the source of their livelihood. These marshes provided the habitat for reeds used for building homes and boats for fishing and catching birds. Peter Hunt, Mott MacDonald’s project manager for the school, says he wanted to create something to reconnect the Marsh Arabs to their roots. “We could have done a conventional brick and block built school but we wanted to do something that reflected the Marsh Arab heritage and community,” he said. “Also, if it was built by the local population it allowed them genuine ownership of the building.”

Surprisingly the local community was less than enthusiastic about the idea. “At one point it was very difficult to get buy in for the project. It is quite unique so people were questioning how we were going to get it done,” says Hunt. “Also they weren’t sure what they were getting.” Hunt had to win over the local sheik and tribal leaders by persuading them it could be done and that he would give them a school that met their needs.

With the locals now behind the project, Hunt could crack on with the design. This is based on the mudhif, a traditional meeting hall for Marsh Arabs. This includes an arched roof built from reeds and woven reed walls but isn’t exactly every day construction practice. “Building mudhifs using reeds isn’t in any textbook,” explains Hunt. “We weren’t sure how they were going to put it together so we went and looked at other examples of mudhifs.” According to Hunt, there were local people who were skilled at building with reeds.

Armed with this knowledge, a 3D model was used for space planning and to create and validate the design just like any other Western project. The building has four classrooms that sit on either side of the main school hall and will also be used by the local community, thus fulfiling the traditional function of a mudhif. The classrooms were built conventionally out of locally produced bricks with the side and one end wall of the hall built in the same way.

According to Hunt the reed grows up to 3m high and is similar to bamboo. It comes in a range of diameters - thicker reeds are stronger but less malleable and unsuitable for weaving. The reeds are cut in an area that hasn’t been drained with the reeds brought to site using water buffalo. The reeds were allowed to dry while the brickwork was being done, then the leaves were stripped off the reeds.

The arched roof structure was built by putting up and setting out the ribs using a solitary reed. The position of each rib along the roof was marked out in the same way “to maintain symmetry”. With the setting out done, more reeds were added to the guide reed to form a bundle some 300mm to 400mm in diameter. These bundles were bound together using twine, then secondary beams were positioned over the primary ribs ready for the reed cladding.

The roof cladding is made of closely woven reed mats that were prepared on the ground. These are positioned over the ribs in two to three layers to ensure the roof is watertight. The sides of a mudhif are formed from a woven reed screen with perforations in it to allow light and air through. The school hall has a traditional reed screen supported by columns that are made in a similar way to the ribs supporting the roof. This screen extends in front of the brick built classroom wings to give the front of the building a completely traditional appearance.

It’s such a fast, efficient way of building. it went up in four months with the reed element taking four weeks. it is the subject of a lot of local interest

According to Hunt, the building performs as intended. “It’s been tested by the recent storms here and the roof is watertight,” he says. The building hasn’t been through an Iraqi summer yet but Hunt says the screen lets in plenty of air and light.

This construction method could help rebuild this part of Iraq. “It’s such an efficient, fast way of building,” he says. The building went up in four months with the reed element taking just four weeks. The building is the subject of a lot of local interest, including from Alice Walpole, the British consul-general. “She was very enthused by it so she came along with the local director of education to the opening even though it’s in the middle of nowhere,” says Hunt.

Walpole and the director of education now want to use this project as a template for more schools locally. Plans are already well advanced to build a large multipurpose community hall in Basra using the same method. This area is one of the toughest parts of the city and is inhabited by Marsh Arabs displaced by the marsh draining. “We are trying to put back some identification of where they have come from,” says Hunt. Like the school, the building will be constructed by locals. “What we tend to do is have a big force of Iraqi engineers and technicians and we only go in when necessary,” says Hunt. “It has to be Iraqi to Iraqi.”

On their own these projects aren’t enough to rebuild this country’s shattered infrastructure, but they are a valuable and sustainable contribution to providing community buildings and reconnecting the Iraqis with their heritage.