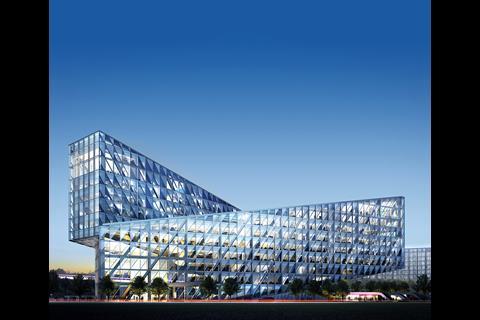 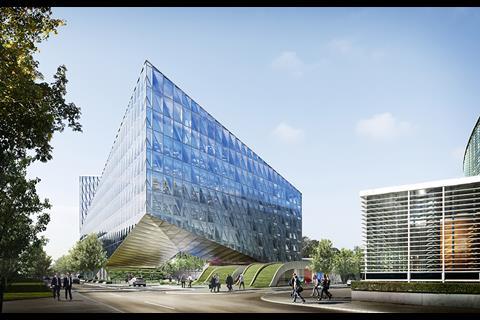 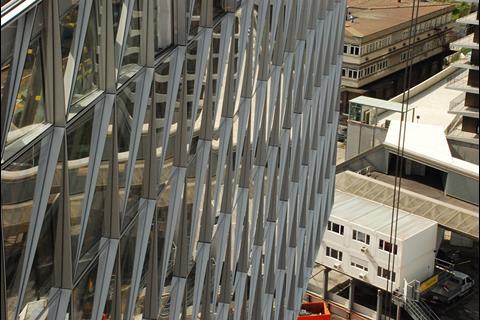 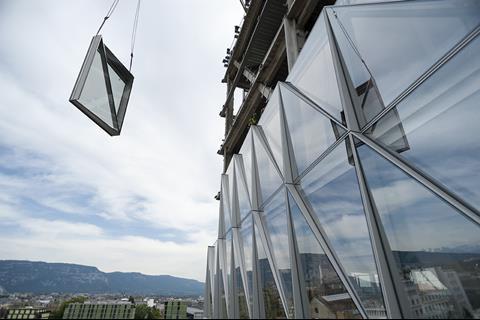 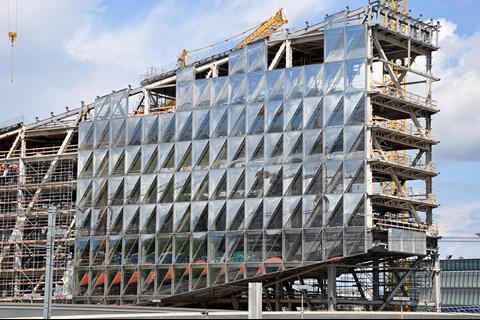 According to some, the era of the glass office block is over. There is a powerful preconception that glass buildings are prone to overheating and thermal inefficiency which for some has made them untenable in an age of environmental responsibility. Ken Shuttleworth of Make architects has been one of the loudest evangelisers for this new creed and his emerging office fortress at London’s 5 Broadgate, complete with narrow strip windows punched into solid facades, provides a convenient, if harrowing illustration of what a future largely glass-free office block might look like.

But for others, reports of the demise of the glass office block have been greatly exaggerated and Skidmore, Owings & Merrill (SOM) is constructing a new office building in Switzerland which is determined to prove it. The JTI Building is an approximately 25,000m² office headquarters in Geneva for tobacco manufacturers Japan Tobacco International. The building is under construction and will complete in late 2015.

At nine storeys and almost 60m high the office block is one of the tallest in predominantly low-rise Geneva. It also features a distinctive twisting wedge form that rises from the ground to provide public access to a central courtyard. But it is its revolutionary facade rather than its height or massing that commands principal technical attention and contributes so much to the ongoing debate about the environmental integrity, or otherwise of glass buildings.

As with many office buildings, the JTI Building’s facade is entirely glazed. But the key difference here is that it is glazed with a relatively new cladding technology known as the closed cavity facade. Closed cavity facades essentially work as a double-skin facade where the cavity between the two skins is entirely or predominantly sealed.
Consequently, as opposed to conventional double-skin facade systems, at JTI the facade cavity is unventilated and comes with carefully calibrated inner and outer glass layers. In order to reduce heat build-up with the cavity, a small supply of filtered dehumidified dry air is pumped into the cavity to maintain a constant positive pressure and prevent moisture, condensation and dirt build-up.

The inner glass skin consists of triple-glazed units with two layers of low emissivity coating reflecting radiated heat from the cavity back outwards rather than into the offices. But in the winter it also benefits from the highly insulated inner skin which also forms the weather barrier and air tightness line. As it is this inner skin that is also providing the building’s insulation, it also means that the outer skin does not need to be thermally broken which offers greater design flexibility.

This flexibility is expressed in the “quilted” glass facade solution devised for the building’s envelope. The facade is composed of faceted glass panels measuring 4.2m high and 3m wide. Each panel is separated by projecting anodised aluminium mullions diagonally split in two to form two triangular planes. One plane is tilted downwards to provide a moderate amount of shading for the area below. The other is rotated northwards to minimise solar gain.

SOM associate director Martin Grinnell describes this design composition as a “self-shading” approach where the facade itself acts as “glass awning” that reduces the amount of solar gain the facade is exposed to. “We took advantage of the freedom that the double skin gives to the detailing of the outer face to develop faceted panels with self-shading geometry making up a quilted skin across the face of the building.”

Aesthetically it also corresponds with the building’s structure. While JIT is a steel frame building, its skewered, rising form generates a clear sense of dynamism and movement.

This is further enhanced by the diagonal profile of its windows which in turn responds to the inclined roofline and chamfered ground level corner opening that provides access to the inner courtyard.

The vertiginous 45m and 60m cantilevers at this corner point further emphasise this dramatic structural arrangement. SOM is a long-established name in architecture and for almost 80 years the practice has designed some of the world’s most recognisable commercial buildings, including Chicago’s Willis Tower and Dubai’s Burj Khalifa, both of which have held the accolade of being the world’s tallest building.

The practice maintains that all these projects are unified by a seamless harnessing of engineering, environmental and design solutions, a strategy evident at JTI. The building’s steel frame structure enables it to assume its winding funnel form as it rises from the ground. This “raised” profile also enables public access to the inner courtyard in its base, integrating the development with its surrounding public realm. And finally the building’s smooth, uncluttered roofline is achieved by plant being concealed in the irregular, triangular voids formed above the inclined soffits of the swooping ground floor cantilevers.

The closed cavity facade also plays a significant role in this strategy of combined engineering, architectural and sustainable solutions. Despite the multiple layers of glass, due to the selection of a neutral solar coating and low-iron glass throughout, the facade offers extremely high levels of transparency and natural light. For a site that benefits from an enviable lakeside position with breathtaking views of Lake Geneva and the surrounding Alps, including Mont Blanc on a clear day, this offers obvious advantages for the quality of internal spaces.

Switzerland also imposes stringent environmental regulations that require high thermal performance in both winter and summer conditions. With closed cavity facades the outer skin is deliberately highly reflective to deflect solar gain in summer and, along with the shading blinds, offers an excellent G-value (solar transmittance through the facade) of 0.104.

The CCF system also brings maintenance and efficiency benefits. With a width of approximately 400mm, it is less than half the width of a conventional ventilated double-skin facade which can be over 800mm wide. This provides obvious commercial benefits with regard to larger lettable floor areas. Also, by avoiding what SOM UK design director Kent Jackson calls a “heavy climate wall”, all the fixtures normally associated with the access and maintenance of conventional double-skins, such as framing, panels, hinges, walkways and gaskets are removed, a condition which can offer both design and cost benefits.

For both Grinnell and Jackson, all these advantages make the closed cavity system the obvious choice for JTI. “We wanted something that was more sophisticated than the conventional ventilated facade you find on many office buildings today,” explains Grinnell, “something that optimised daylighting and transparency while meeting the tight Swiss regulatory environmental requirements.”

For Kent, the CCF solution also offered aesthetic benefits which appealed to the co-harnessing of engineering, aesthetic and environment solutions that forms SOM’s primary design ethos. “We wanted something that read as a volume and became kinetic and alive as you moved around the building. The quilted facade achieves this.”

And for Kent, both JTI and CCF potentially represent a landmark precedent in the environmental evolution of glass buildings. “As glass technology becomes more sophisticated, glass selection rather than the traditional purging of heat through air flow will play an increasing role in the thermal rebalancing of glass buildings. The glass building is definitely not dead.”