Such stuff as dreams are made on: Sam Wanamaker Playhouse 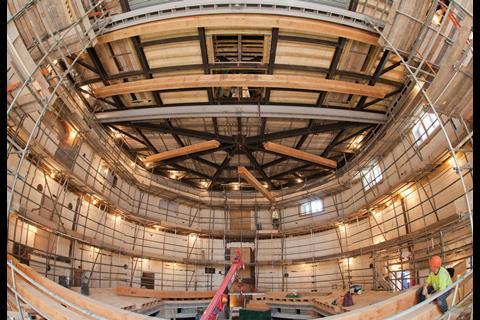 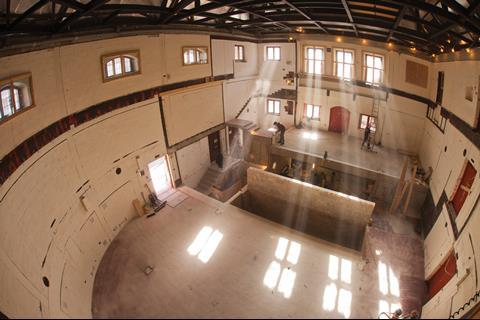 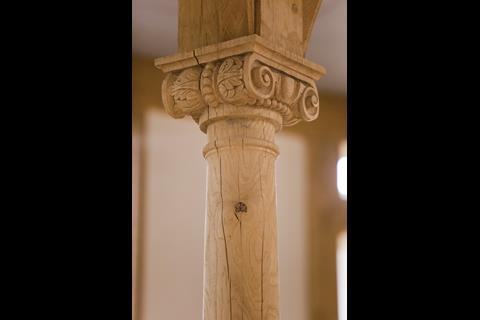 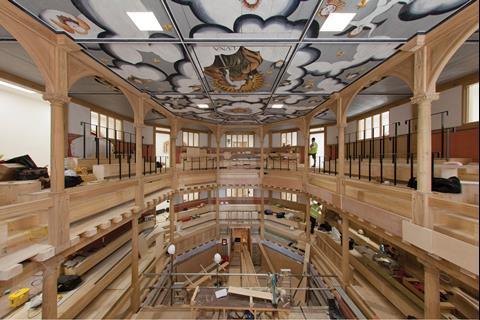 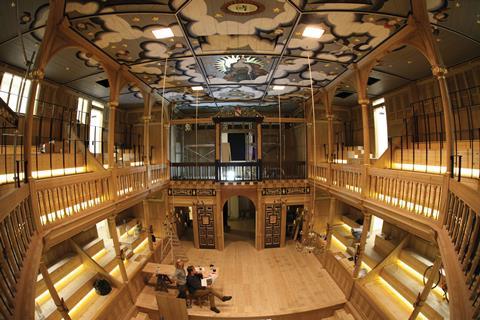 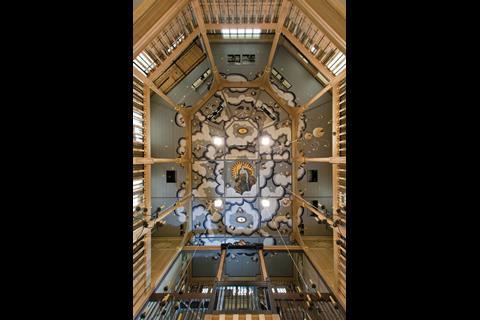 Seventeen years after the reconstruction of Shakespeare’s Globe, the Sam Wanamaker Playhouse completes the vision in dazzling style

For a theatre that first opened its doors in 1599, Shakespeare’s Globe on London’s Bankside has witnessed an extraordinary amount of construction activity over the past 20 years. Despite being the playhouse most popularly associated with Shakespeare’s work, the first Globe Theatre endured its fair share of bad luck. Burned down in 1613, its replacement lasted less than 30 years before, like all other theatres in London, it was closed down by the puritans at the outbreak of the Civil War. While most theatres reopened with the restoration in 1660, the Globe had already long since been pulled down to make way for tenements.

In an ironic twist it was puritanical paranoia of a different kind that led to the Globe’s own restoration over 350 years later. Renowned American actor Sam Wanamaker, fleeing the McCarthy purge in sixties America, relocated to England and devoted much of the remainder of his life to rebuilding Shakespeare’s vanished theatre. Sadly, Wanamaker did not live long enough to see the fruits of his labour, the painstakingly reconstructed Globe Theatre opened just yards from its original site in 1997 and has since gone on to become one of the London’s most popular cultural venues.

You might be forgiven for thinking that the story of the Globe’s rebirth ended in 1997. Well, think again. Part of the 1997 replica, designed by Pentagram Architects, included a large brick volume on the southern side of the theatre complex. Unbeknown to the vast majority of the public who have visited the theatre, this space has been used for storage and rehearsals since the theatre’s reopening. But right from the start of the reconstruction project, Wanamaker and the theatre trustees had envisaged a much grander role for this volume whenever funds became available. Seventeen years after the Globe’s reopening, that vision has now finally been brought to life.

The Sam Wanamaker Playhouse is the final chapter in the reconstruction of the Globe Theatre and officially opened this week. The £7.5m, 350-seat auditorium fulfills a core ambition of the Globe’s trustees, to recreate both the internal as well as external environments appropriate for the performance of Jacobean theatre. The famous open-air auditorium of the Globe already satisfies the second ambition, the new indoor playhouse now addresses the first.

The new theatre has been built by specialist conservation contractors Virtus and designed by Allies and Morrison Architects. As well as hosting Shakespearean plays and Jacobean theatre, the space will also occasionally feature contemporary performances and live lounge events. 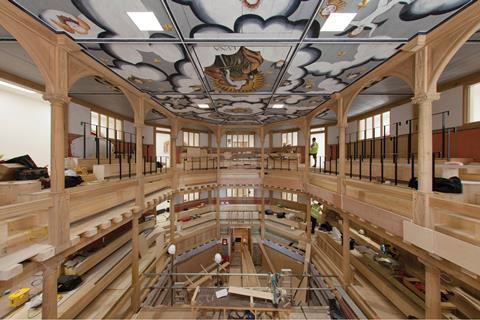 The playhouse is a dazzling recreation of a Jacobean theatre. The stage is surrounded by double-height cantilevered galleries containing tiered seating. These are set behind a stunning screen of columns and arches meticulously carved from seasoned English oak. In plan the auditorium is configured as an irregular hexagon with the faceted galleries occupying five sides and a flat, panelled wall, complete with a recessed minstrels’ or music gallery at its upper level, set behind the stage. The entire set-piece is surmounted by a sumptuously painted wooden ceiling depicting, as was often the Renaissance manner, an allegorical depiction of the heavens.
Throughout the detailing is exceptional. While the decoration is not ostentatious, a riot of sensuously carved capitals, cornices, corbels and volutes provide a full-bodied, atmospheric and meticulously authentic depiction of an early Jacobean interior. Much smaller in scale than the main Globe auditorium, it also maintains a warm intimacy, a sensation compounded by the rich, luscious woodwork and the extensive use of candlelight emitted from elegant brass candelabra hanging low from the ceiling. 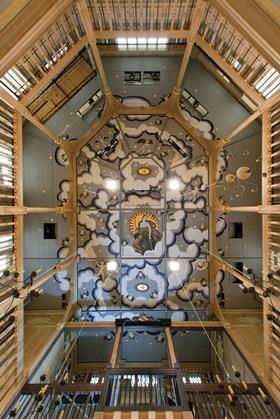 But achieving so convincing a simulation was not easy. Right from the start, the project presented two key challenges, one architectural, the other constructional. “There were virtually no other existing Jacobean theatres from the period for us to study,” explains project architect Oli Heywood. “The Bodleian Library and Sheldonian Theatre in Oxford are close but one’s a library and the other is built in a slightly later style. So the project was a research exercise as much as anything else. It was like building an essay.”

Apparently, inspiration did eventually come from an unlikely source. Two sketch drawings for an un-built playhouse by much-overlooked early-17th century English architect John Webb were discovered in an old Oxford manuscript shortly before the project began. This provided some guidance for the details and character that were eventually recreated at the new theatre.

The second major challenge took a more prosaic form, as Virtus’ head of business development, Joseph Telfer, explains: “Because the original brick chamber into which the new playhouse has been inserted was essentially back of house space, it was never really finished. One of the consequences of this is that its original floor slab was comprised of several levels of concrete. All of this had to be removed which amounted to about 500 tonnes of concrete being taken out of the building. 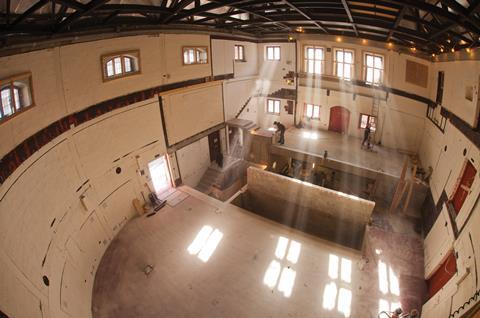 “Also, as part of redevelopment works to the foyer, we had to smash out a big chunk of what was the concrete slab to the main floor level. This is the slab also occupied by the theatre restaurant on the other side of the foyer which is responsible for a significant portion of the Globe’s revenue and, like the entire venue, remained opened throughout construction. So we had to be particularly mindful of vibration and disruption during the works.”
The new playhouse also effectively conceals the complex structural shell it has been built within. The auditorium is essentially an oak-framed structure that is entirely separate and structurally independent from the original 1997 steel-framed brick envelope that encloses it. Externally, the new playhouse is entirely invisible. This also imposed severe accessibility constraints during construction. 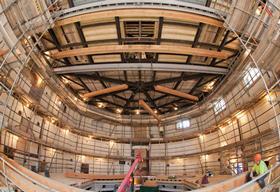 “Everything brought inside the brick chamber for the theatre’s construction had to fit through a 1400mm opening,” says Telfer. “We even had to find the biggest spider crane we could that would fit through.” The entire oak frame as well as all its fixtures and fittings were prefabricated and assembled into position on site by the crane. According to Telfer, the process was “pretty much like a jigsaw puzzle”.

The oak frame too presented challenges of its own. The frame is supported by a series of oak columns that circle the outer edge of the playhouse, against the inner leaf of the exterior steel and brick superstructure. However, oak tree trunks are curved and do not normally grow with the level of straightness required for a structural column, unless, as Telfer explains, man gives nature a little nudge. “We used seasoned oak that is specifically planted among birch trees. Birch trees naturally grow far straighter than oak and act as a natural guide for the oak if they are both planted together.”

The extensive use of candlelight within what is essentially a wooden chamber also presents obvious fire risks (though the original Globe burned down when sparks from a firing canon landed on the thatched roof). Candlelight formed an essential component of Shakespearean drama: Shakespeare and his contemporaries would time the individual acts of their plays to last as long as it would take for a single candle to burn out. But while the Globe had already set a fire regulations precedent by incorporating the only thatched roof permitted in the capital since the Great Fire of London in 1666, the issue of candles, oak and fire safety was one that had to be directly addressed by the design team, as Telfer explains. “We specified candles that can burn at different rates dependent on the level of air flow around the auditorium. The candelabra are also capable of being raised or lowered to any level within the space. Therefore, if necessary, we can control the rate and position at which the candles burn.” Moreover, as Telfer himself points out, oak is actually an extremely effective fire retardant and its charred skin can often achieve impressive fire protection times.

The Sam Wanamaker Playhouse will undoubtedly extend the Globe’s worldwide reputation as the spiritual home of Shakespearean dramatic performance. The intricately reconstructed playhouse interior is itself a stirring and virtuoso piece of architectural theatre and it simmers with as much drama, charisma and atmosphere as the performances it is now poised to hold.

But, like theatre itself, it is the structural contortions hidden behind the scenes that render it all the more impressive, from its autonomous oak frame deftly camouflaged within its steel and brickwork shell to the logistical ingenuity required to construct the auditorium in such a confined and comparatively inaccessible space, the new playhouse is every inch a technical as well as visual feast. With the Globe’s newly expanded complex now in place, history will invariably show that the second Elizabethan age has contributed almost as much to Shakespearean theatre as the first one did.