The completion of the £2.4bn One World Trader Center is a milestone in the painstaking redevelopment of the former Ground Zero site in New York. But with two towers and Santiago Calatrava’s vast station still under construction, there’s plenty of work yet to be done.

Last month the biggest part of the World Trade Center construction puzzle was completed. One World Trade Center (1 WTC), popularly known as the Freedom Tower, is the powerful symbolic response to the horrific destruction that took place here on 11 September 2001. Its aspirational title has replaced Ground Zero as the popular moniker for the site and is a reminder that rebuilding the World Trade Center has a far deeper significance than glass, steel and offices; it was always intended as a demonstration of the sense of defiance and hope that rose in the wake of the appalling events of 13 years ago.

Despite these lofty ambitions, the 16-acre redevelopment project has not been plain sailing, as the protracted reconstruction programme indicates. The plans have been mired in legal battles and controversy for over a decade and the completion of several buildings have been delayed. Even today, the completion dates of two of the site’s towers by Norman Foster and Richard Rogers are largely in doubt.

Nevertheless, the completion of the 1 WTC marks a major milestone and other key projects, such as Santiago Calatrava’s WTC transportation hub, are set to open next year. So, to mark the opening of one of the biggest components of the reconstructed World Trade Center and pre-empt its eventual completion, here is an update on the progress of the most famous construction site in the world. 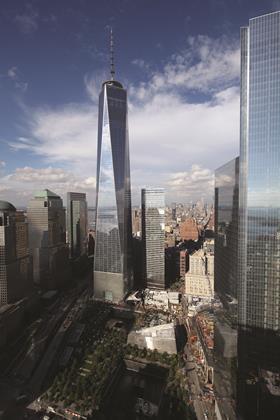 With a symbolic spire height of 1,776ft, in reference to the date of the Declaration of Independence, 1 WTC is currently the fourth tallest building in the world. Yet its actual roof height of 1,368ft is exactly the same as its predecessor.

Instead, it is the staggering, unprecedented cost of almost $4bn that marks new territory. Cost overruns and leasing changes have been widely blamed for the overspend, but the biggest factor is cited as security measures. The possibly catastrophic effects of a third attack on the World Trade Center are obvious and elements such as its heavily reinforced, windowless podium do their best to minimise risk. Fifty-five per cent of the building has been leased and, like its predecessor, the tower offers a public observation deck providing stunning views. 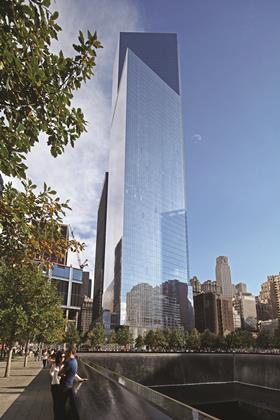 Japanese practice Maki Associates’ 4 WTC is one of only three towers completed on the site - 7 WTC and 1 WTC being the other two. It is also the shortest of all the WTC towers. Nevertheless, it is one of the sleekest of the designs: its sheer curtain walls of reflective, ultra-clear glazing provide a minimalist finish and reflect the shimmering water of the 9/11 memorial pools opposite.

With the development of adjacent towers 2 and 3 WTC stalled, the massing role of Maki’s tower remains somewhat muted - it was intended to negotiate the final shift in scale from the high-rise of the skyscrapers to the low-rise of the memorial. For these purposes, the top third of the tower is diagonally cut back from its lower face to create a final “step” down to street scale.

Sustainability formed a key part of 4 WTC’s design, with occupiers breathing fresh air drawn from the top of the tower and filtered to each floor. All of the building’s power comes from renewable wind, solar and hydroelectric sources and the tower uses 30% less water and 20% less electricity than conventional towers of a similar size. 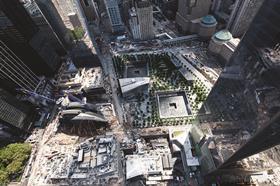 The much delayed station terminus promises to be the architectural showpiece of the entire reconstruction site. But this has come at a price. Initially expected to open in 2007, completion was successively delayed and is not expected to take place until 2015, eight years late. But even worse, America’s most expensive station is now an astonishing $2bn over budget as costs have more than doubled. Part of the blame for this has been attributed to the architectural design which features marble lobbies and vast steel spans that were manufactured overseas. Calatrava’s design has been significantly scaled back, with its retractable rooftop wings and glazed canopies early casualties, but with no obvious savings in the overall budget. Other factors cited include a lack of co-ordination, unreasonable demands from all sides, political interference and sustained contractual disputes.

Nevertheless, when the station is eventually complete, Lower Manhattan will hopefully have a modern masterpiece to rival Grand Central. Calatrava has compared the building to a “bird being released from a child’s hand”. With twin 150ft winged canopies thrusting skywards from a ribbed steel and glass cage, its soaring form symbolises the sense of hope and aspiration that has become the byword for the site’s reconstruction. In an echo of the structural frame of the original World Trade Center towers, a 271-tonne Vierendeel truss will serve as mezzanine floors.

It will be an impressive sight - and will no doubt lift the spirits of the 250,000 commuters set to use the station every day. 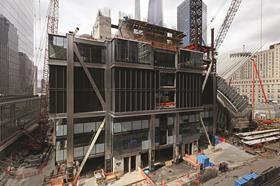 Work on WTC2 ($2.9bn, £1.7bn) and WTC3 ($2.75bn, £1.6bn) the second and third tallest towers on the World Trade Centre site, has been held up by financing and economic issues. Both have been designed by British architects: Norman Foster has designed WTC2, a 78-storey skyscraper on the northern side of the WTC Transportation Hub and Richard Rogers has designed WTC3, the 71-storey tower on the opposite side of the Hub. WTC2 has only been built up to street level with work on the tower stopping last summer. Construction will proceed once economic circumstances have improved and as yet, the tower has no anticipated completion date. More progress has been made on WTC3 where the tower has reached a height of seven storeys. Its expected completion date is now 2017.

The SOM-designed 7 WTC ($700m, £445m), situated just outside the World Trade Center development boundary, opened in 2007 - the first building by far at the redeveloped complex. Speed of reconstruction was the result of its lower 10 storeys housing a local substation, as well as its location being outside the main site. At 52 storeys and 226m high, it is less than half the height of the Freedom Tower but features SOM’s trademark sheer glazed curtain walls.

The National September 11 Memorial and Museum ($530m, £311m) opened in 2013 and its two giant pools, each one aligned to the footprint of a destroyed tower, powerfully encapsulate the sense of absence and loss still felt on the site. Designed by architects Michael Arad and Peter Walker, the memorial features the names of the 2,983 victims of the 1993 and 2001 attacks inscribed on 76 bronze plates attached to the parapet walls that form the edges of the pools.