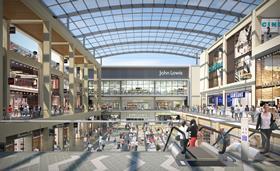 Laing O’Rourke has climbed into the top spot in the contractors’ league table for February after being awarded the £440m Westgate Shopping Centre development in Oxford by the Crown Estate.

The 30-month contract will see Laing O’Rourke focus on the construction of the shell and core of the three-storey 800,000ft2 retail and leisure centre as well as a 1,000 space underground car park and 61 new homes. Preparatory works began in February with Westgate expected to complete in late 2017.

Balfour Beatty re-entered the league table in second position with a raft of contract wins worth a combined £397m, including a £265m construction programme from Thames Water and a £40.1m deal with SSE for the Dounreay Mybster transmission and connection project in Scotland. The three-year contract includes the design and construction of a new overhead line including 86 new pylons between Dounreay and Spittal substations. Skanska’s £330m deal to construct AstraZeneca’s new biomedical campus in Cambridge saw the contractor move up to third in the league table from 26th place in January.

Kier slipped from first to fourth place despite winning 44 projects worth a total of £248m.

Gilbert Ash entered the top 10 at number six with three projects worth a combined £212m, including a £200m mixed-use scheme for Albemarle Development Limited in Ruislip which boasts 104 homes, a cinema, shops and restaurants.

It was a much busier month for contract wins than January. The value of contracts won by the top ten, including civils, was £2.3bn in February, up 35% from £1.7bn the previous month, with the number of projects also up to 249, up from 148. 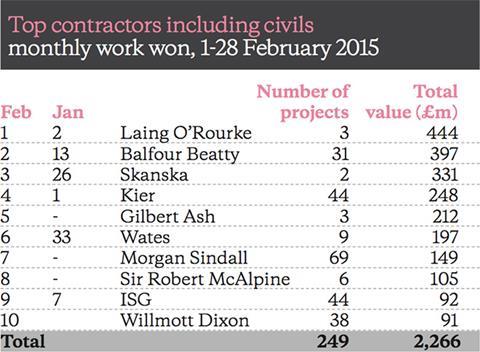