Six major projects, including data centre and development in Camden Town, propel firm to top of the table 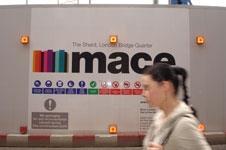 Mace has surged to the top of the contractors’ league table for April after racking up six large contracts worth a combined £238m.

Mace’s project wins were all major contracts, including a £115m development in London’s Camden Town and a £58m data centre in east London for telecommunications giant Telehouse International. Other contracts included a £30m package of schools in Bracknell and a £16m retail and office building in Westminster.

Kier moved up to second in the table with a haul of 48 projects totalling £194m.

Morgan Sindall re-entered the top 10 in third place after also securing a raft of small projects worth a combined £168m.

Graham Construction also re-entered the top 10 in fifth after securing 11 contracts worth a combined £145m. The group won six large contracts with Dumfries and Galloway council in Scotland to redevelop several schools and academic buildings, and also build a learning centre and a campus to accommodate three different schools.

Bowmer & Kirkland rose to sixth with three large project wins worth £130m for contracts to refurbish offices in Uxbridge and Reading, and to build new offices in Coventry. Bouygues climbed to eighth from 10th after securing five projects worth a combined £87m, including a £25m contract to build a retirement home.

April saw a drop in value of contracts awarded to the top 10 firms, with the companies winning £1.4bn of work, down 58% from £2.4bn in March. 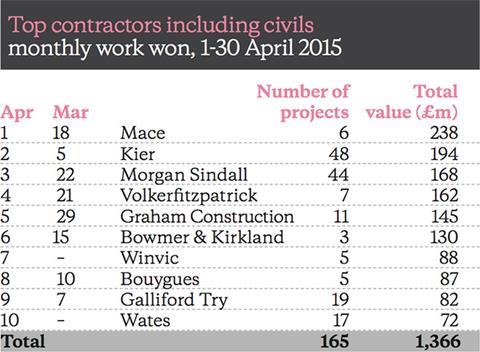