For pioneering UK construction professionals scanning the international horizon, there can be few places more attractive than a country with English speakers, simple contracts, nice big scenery and lots of work

A modern myth has recently taken root in the UK construction industry. It claims that all Western markets are in the doldrums and that success - either for companies or ambitious construction professionals - lies only in more “challenging” foreign markets.

But you don’t have to grapple with the intricacies of coffee etiquette in Saudi Arabia or take your chances in China with a contract that may be worth less than the paper it’s written on (in Chinese). There is one market that many Brits would find comfortingly familiar, and which is bucking the prevailing trend in the West by doing quite nicely, actually. Here’s why Canada is where you should open your next branch - or apply for a job.

Vince Clancy, chief executive of Turner & Townsend, which has had an office in Canada since 2004, described the country as “one of the most exciting growth markets in the world”. This was shortly after his firm acquired Toronto-based construction consultant CM2R in April last year. It’s easy to see why he’s so enthusiastic.

Firstly, the Canadian economy has escaped the worst of the global downturn. Gerard McCabe, managing director of T&T Canada, says: “Surprisingly, perhaps, considering the fact Canada’s main trading partner is the US, the economy here has stayed relatively strong.” This is down to Canada’s conservative banking sector, which tends to avoid high-risk investments, and a government financial stimulus programme that involved bringing forward infrastructure projects.

As a result, the Canadian economy will expand by 2.3% in 2011. This is less than last year’s 3% growth, but still compares favourably to the 1.9% expected in the UK.

Canada’s construction economy is even stronger. It will grow 4% this year and then maintain 3.7% growth every year until 2015, according to research firm Business Monitor International.

A growing number of UK firms are taking notice of all this. In December, Carillion said it would double construction earnings in Canada over the next three to five years to about £1bn - having scaled back UK construction from £1.8bn to £1.2bn in 2010. The firm is finding opportunities in Canada’s public private partnership sector, known as P3, and its projects include a deal to design, build and finance Toronto’s Forensic Services and Coroner’s Complex, and then maintain it for 30 years. The project is expected to generate £306m of turnover for the company.

Architect BDP is also targeting the market and may open an office there. Chief executive Peter Drummond says: “This is a very interesting market in all sorts of ways. There are only about 33 million people but natural resources are massive, the economy’s healthy and there is a drive to improve schools, hospitals and housing.”

So what else is being built? One of the most exciting projects is the £1.53bn Toronto 2015 Pan American Games, for which procurement is just starting (see box right). Besides this, the government stimulus plan has kick-started a plethora of infrastructure projects, including social infrastructure like hospitals as well as roads, bridges and water treatment plants. But the private sector has sprung into life too in recent months, leading to slew of energy projects. A number of major projects in Alberta’s Oil Sands area, for example, have restarted (see box below right). 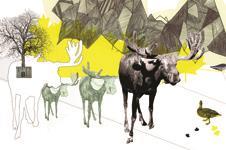 Working in Canada is a lot easier for the average Brit than many other foreign markets. Drummond says: “Doing business is relatively easy. As well as speaking English the Canadians are very open and progressive, and they have good legislation.”

Founded by the British and French, Canada’s legal system is based on British law and the construction industry uses a standard set of contract forms called CCDC, which are similar to JCT and include lump sum, design-and-build and construction management contracts.

McCabe, who is from Northern Ireland but moved to Canada 20 years ago, says: “The industry is much less litigious here than in the UK and particularly the US.” He adds: “Doing business is always pleasurable here, it’s much less aggressive.”

If all this appeals, but your company doesn’t have a Canadian branch, the good news is that companies in Canada are recruiting. The Construction Sector Council of Canada predicts 30,000 new construction workers and professionals will be needed by 2016 to meet the anticipated rise in construction activity. Some 22,000 workers will be needed just to replace retiring employees. The Canadian government wants to fill these roles through immigration.

One particular recruitment hotspot is Alberta. Thomas Lukaszuk, Alberta government minister for employment and immigration, says: “We have identified immigration as a potential avenue to help address future labour market shortages and it will play an important role in Alberta’s labour market growth.”

Canada predicts 30,000 new construction workers and professionals will be needed by 2016 to meet the anticipated rise in construction activity

The demand for construction professionals is reflected in relatively high salary levels. Building’s international salary guide, compiled in May last year by recruitment agents Hayes Construction, showed Canadian salaries were amongst the highest in the world. For example, the typical salary for a project manager with five to 10 years’ experience is £71,500, compared with just £40,000 in the UK. An architect with the equivalent experience would earn an average wage of £52,000, compared with £31,400 in the UK. And for a civil engineer, £54,000 in Canada, versus £35,000 back home.

But what is like to make the move? Dominic Leadsom is a Brit who moved to Canada with his family a year ago to work as a director in Turner & Townsend’s Toronto office. He says: “I came to Canada because I could see there was a huge opportunity to be part of some exciting infrastructure projects - and they were actually being delivered, as opposed to in Europe.”

One downside, of course, is that while, say, the Middle East is only three or fours hours flight time from the UK, the trip back home from Canada is long (at least seven hours) and expensive. On top of this, the approach of both the Canadian government and companies to employing Brits means getting a job there tends to mean formally immigrating, rather than getting a visa for a temporary period.

Another issue is that Canada’s strict banking system means it will take a while before you’re eligible for loans and to get a mortgage you will usually have to find 35% of the house price. Leadsom, for example, says he is only now arranging a mortgage a year after arriving in Canada.

But despite these issues, he hasn’t looked back. He says: “The move couldn’t have been easier. This is a beautiful place to be, the quality of education and healthcare is excellent and there is just so much space …”

The Pan American Games planned for 2015 in Toronto mean 2.4bn Canadian dollars (£1.5bn) is being spent on the construction of facilities, including the 1bn Canadian dollar athletes’ village on Toronto’s West Don Lands.

At the start of this year, Infrastructure Ontario released a request for qualifications (RFQ) for companies to submit their qualifications to design, build and finance the Pan American aquatics centre, Field House and Canadian Sport Institute Ontario project.

A successful RFQ will pre-qualify you to respond to a request for proposals which will be issued in spring 2011.

The client is Infrastructure Ontario and Toronto 2015, which are working with municipalities in the Greater Toronto-Hamilton and Golden Horseshoe areas, universities and provincial agencies to procure and deliver the athletes’ village and Games venues.

Value: CA $6.2bn
Location: Central Labrador (generating facility), Muskrat Falls to Churchill Falls, Labrador to the island of Newfoundland, and Newfoundland to Nova Scotia (transmission systems)
Owner: Nalcor Energy (Muskrat Falls and Generating  Station), Emera (49 per cent of transmission assets)  Island with 2250 MW.
Funding: Public/Private
Key players: Unvonfirmed, but an RFP has been issued for engineering and project management to Black & Veatch, Hatch, and SNC-Lavalin.
Status: A Nalcor/Emera partnership, announced in November 2010, will result in the development of Muskrat Falls, with transmission from Labrador across the Strait of Belle Isle for use on the island of Newfoundland.