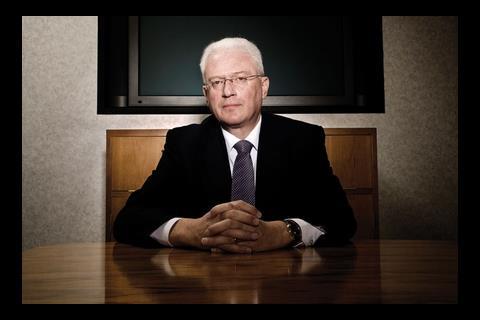 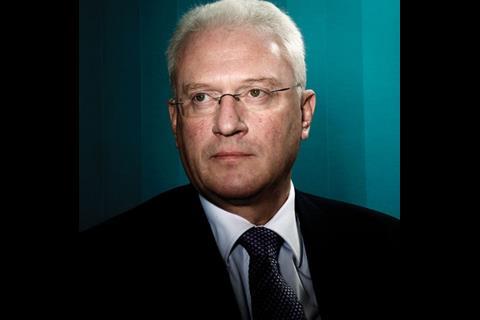 The British arm of the world’s largest contractor has a reputation for lightning reactions, a grip of steel and pretty soon, global reach – just don’t call it aggressive. Emily Wright met its head

When John Stanion is asked what he is like as a boss, he fires back: “I’m very good at delegating.” One would hope so. The chairman and chief executive of Vinci Plc, the UK contracting arm of the world’s largest construction firm, commutes from Gloucestershire to Hertfordshire every day, sits on six boards, and is planning an international expansion while keeping abreast of the grand strategy being plotted in Vinci’s French headquarters. “I’m in Paris about once every two weeks – weather permitting,” he says raising his eyebrows at the snow swaddling his Watford office.

This may sound a like a lot to fit into the working day, but the 57 year old points out that Vinci Plc accounts for a mere €1.1bn (£1bn) of the group’s €33.5bn turnover. It does, however, mean that Stanion is extremely well placed to comment on the trials of steering a moderately large UK contractor through the treacherous waters of 2010, and also on the course being charted by Vinci Group, which is presently ranked by the Financial Times as the 259th biggest company in the world. The UK company and its parent look set to adopt different approaches to weathering the storms ahead, but one thing’s for sure: neither looks likely to lose its reputation for spotting a bargain.

The parent company’s last posted results, for the nine months to 30 September 2009, show that revenue fell 4.6% (it was €23.6bn compared with €24.7bn at the same point of 2008). The largest area of decline has been in France (€14.6bn compared with €15.6bn). International revenues have remained flat at €9bn. So, the group has proved resilient despite the collapse in private sector demand. Its order book is looking healthy, too. By September, this was 4% higher than it was on 30 June, at €24.2bn; €13bn of that is made up of international work.

This solid financial base is allowing Vinci père to contemplate further acquisitions. And buying other firms, particularly those in emerging markets, is something that this firm does very well. The price paid for this talent is a company structure that resembles the Habsburg family tree, within which, at the latest estimates, 164,000 employees are undertaking 246,000 projects. Thankfully, if you zoom out far enough the structure is relatively simple. The firm is split into four business lines: construction, which is worth €15.7bn, roads, which is worth €8.2bn, concessions – that is, PFI-style projects that Vinci manages after constructing them – €4.8bn and energy (€4.6bn). Each of these lines has operations all over the world, although the firm still makes 63% of its income from France (see the charts below).

Stanion’s branch office is growing rapidly: turnover is £1bn, up from £778m last year thanks to its takeover of Taylor Woodrow’s construction arm, but he is wrestling with the same problems as any of his UK peers. On redundancies, for example, he says “like everyone else” that he hopes the worst is over “but inevitably as projects come to an end and we don’t replace them … well, it’s an age-old issue in construction.”

As a consequence, the group is facing 2010 with the same strategy as most other firms – to survive. “There is a real sense of uncertainty at the moment,” Stanion says. “We have a government that is dysfunctional in many respects and we have resistance by any politician to come out and say exactly what they’re going to do.

“Nobody should delude themselves that there isn’t going to be a period of difficulty ahead. Our job is to understand that and work out how to survive.”

We have a government that is dysfunctional in many respects and we have resistance by any politician to come out and say exactly what they’re going to do. Nobody should delude themselves that there isn’t going to be a period of difficulty ahead

In the UK, the main thrusts of the strategy are threefold: to expand into growing sectors, to take advantage of acquisition opportunities, and to open international offices. Which growing sectors? Stanion reels off new-build nuclear power stations, nuclear decommissioning, facilities management and transport and infrastructure, including London Underground and Crossrail. He is quick to add that calling these sectors “growing” takes a little bit of faith given the state of the exchequer. Transport in particular is vulnerable to a retrenchment in public spending.

Of course, Vinci’s acquisition strategy will have to conform to this plan, which means that Stanion is looking for “regional contractors, energy and transport engineers and facilities managers”. He adds that there are no targets visible at the moment, and that “acquisitions will be made as and when the right opportunities arise”. But he does hint that this may not be in the too distant future: “With so many mid-sized construction firms facing difficult trading conditions at the moment, it’s likely there’ll be more of those opportunities coming up.”

One benefit of being a relatively small company is agility. The group has made six acquisitions in five years, including Taylor Woodrow in 2008 and failing East Anglian contractor Haymills in August last year. This has led to accusations of an aggressive approach to growth – something Stanion is quick to reject: “We’re not ‘aggressive’. We’re proactive when opportunities arise. We don’t have a policy of aggressively acquiring companies for the sake of it. We make acquisitions that fit strategically with our business model.”

Stanion adds that his present management team can now make rapid judgments about the value of contracts and companies. A good example was Haymills, which was in administration for about half a hour before Vinci picked it up – not bad for a target with a turnover of £181m.

The third major strand of the strategy, international expansion, is a bit of a departure for the UK business. Stanion is quick to point out that Taylor Woodrow, which it acquired in 2008, has plenty of experience, mostly in the Middle East, so expanding overseas will be made easier. Stanion also knows the area well: between 1976 and 1982 he worked for former German contractor Philipp Holzmann in Iraq and Saudi Arabia (see CV below).

He explains why expansion has not been put into action before now: “Seven days after we acquired Taylor Woodrow, the news of the Lehman Brothers collapse broke. Everything changed. Construction output is now down by about 25% since 2007. There is a possibility this will continue and so part of the response, as well as strategic moves in UK, is to go into the Middle East construction market.”

Stanion says Vinci Plc is focusing on infiltrating markets where British companies have traditionally worked successfully and names Qatar, Abu Dhabi and Saudi Arabia as targets. Libya and Egypt are also possible destinations. “I have no ideas on numbers yet,” he says, “but I do have ambitions. The new offices will be a mixture of UK and local staff. We need to keep close control of the cost base so hiring locally makes sense.” The offices are due to be up and running before the end of the year and the message is just to watch this space.

We’re not ‘aggressive’. We’re proactive when opportunities arise. We don’t have a policy of aggressively acquiring companies for the sake of it. We make acquisitions that fit with our business model

Like its British arm, Vinci Group will be focusing on growth markets such as energy, nuclear power, waste, water, roads and airports. Vinci’s major test for 2010 will be to balance the traditional building side of the company, which is declining in importance, with its relatively high-margin work overseeing airports, roads, car parks and telecoms networks.

“Concessions have a longer investment cycle, require high investment and deliver high margins. In the past, construction firms have gone into property and housing to enhance margins. Vinci doesn’t do that. It invests in these long-term concessions over several years.”

Alastair Stewart, an analyst at Investec, says: “Vinci is a fantastic group and has done very well in construction. But where it is doing really well is in concessions, particularly in France. They basically have a licence to print money. And it is the strong construction side of the business that has given them the ability to build up the concessions side. It makes them attractive to the governments giving out the work.”

When it comes to acquisitions, for the parent company the processes tend to be lengthy and pre-planned, rather than opportunistic. There has been a long gestation period with all of the group’s high profile deals, including transport infrastructure operator Autoroutes du Sud de la France (ASF), Europe’s second largest toll roads operator, in 2006 which resulted in Vinci becoming the world’s leading concessions and construction group.

The deal it is now focused on is to buy Cegelec, an electrical engineer owned by Qatari Diar. “The proposal is that they will sell in exchange for 31.5 million Vinci shares,” says Stanion. “That will make Qatari Diar the second largest shareholder in Vinci behind staff in a deal that would increase our revenue by $3bn (£1.8bn) and make us one of the, if not the, leading electrical engineering businesses in Europe. That sort of thing doesn’t come out of the blue.”

An area for improvement

Vinci may have topped the European contractors’ league, but Stanion says being a small part of a huge company – and one that has grown through numerous acquisitions – can be a problem when it comes to transparency and democracy. In particular, the group has a reputation for making big decisions that come as a surprise to onlookers and rivals – and its own staff. Stanion agrees that communication is an area that needs work.

“When you have a company that has been put together from other companies, the people involved have different experiences and expectations about what they should know,” he says. “Taylor Woodrow, for example, always had a very intense dialogue with staff, more so than we’ve ever had here. We’ve got work to do in terms of communication with the staff. Another problem is that the speed at which things can happen, as a result of our reactive strategy when it comes to acquisitions, has left people feeling uncertain, understandably.”

Never without a plan, Stanion says that his strategy to combat this will be to hold roadshows around the country. He will visit every region to answer questions and explain issues, targets and plans to employees in small groups. This is something Vinci staff can look out for in the next two months, including those in any firms that it picks up between now and then …

How he got here

Stanion qualified as a QS before joining former German construction group Philipp Holzmann in Frankfurt in 1976. For six years he was involved in developing business in the Middle East. From 1982, he was a director of Fairclough and later Amec International in the UK. In 1988 he joined Kier to head its property and project finance arm before becoming group managing director in 1989. In 1992, he moved to French Group SGE, now Vinci, as chief executive of Norwest Holst. For the last 16 years he has been chairman and chief executive of Vinci Plc in the UK and for subsidiaries in Germany and the US, undertaking facilities management of US military facilities.

He is married with four sons, and splits his time between his homes in the Cotswolds and Devon. His interests include opera, photography and ocean sailing.