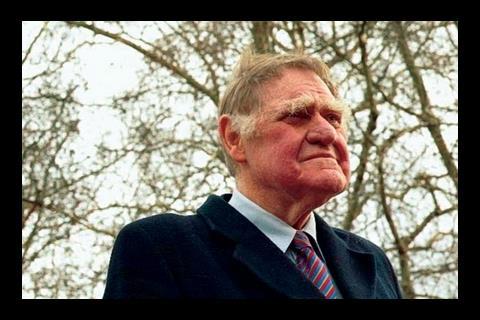 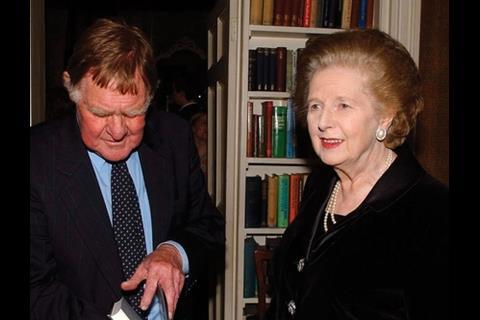 INTERVIEW: Margaret Thatcher’s former press secretary, Sir Bernard Ingham, has spent much of the past 10 years lambasting the ‘mad mullahs’ of the anti-nuclear lobby and subjecting their arguments to an unrelenting barrage of ridicule. And don’t think the government’s decision to build a lot of nuclear stations is going to stop him.

Into the calm of the lobby at the Institute of Directors steps Sir Bernard Ingham, pro-nuclear campaigner and scourge of the “mad mullahs” of the green movement. Now 75, he’s a hunched figure in a navy coat, the latest in a procession of snowy-haired, red-faced gentlemen seeking refuge from the vulgarity of Piccadilly Circus.

Although he’s known for savage denouncements of the anti-nuclear lobby, there’s initially little to suggest he’s about to blow. The man who, as Margaret Thatcher’s press secretary, was known as the “rottweiler” and struck terror into hearts up and down Fleet Street, is calm, solicitous and only mildly disappointed that all those other gentlemen have already nabbed all the tables in both coffee rooms. He ushers me to a leather banquette at the foot of a grand staircase, enquires after the photographer, checks my Dictaphone is working, regrets he can’t buy me a coffee.

Then he begins to calmly explain how he came to be the founding secretary of Supporters of Nuclear Energy (SONE). Although Ingham is best known for his time with Thatcher, he’d already spent six years as a civil servant in the department of energy in charge of conservation policy and renewables and covered elements of energy policy as a journalist in his native Yorkshire.

When he retired from the Civil Service in 1991, he became a consultant to British Nuclear Fuels, and in 1998, set up SONE. “People felt that with the privatisation of electricity, including elements of nuclear power, nuclear would have no friends left whatsoever. We had about 330 members, pretty high-powered members, but nonetheless it’s a small organisation which seeks to get over the pro-nuclear point of view, which is so easily drowned out” – and here a querulous note creeps into his voice – “by all this green environmental nonsense. Which I regard as a positive menace to the health and security of the British people.” By the end, he is spitting out the words.

This is the pattern for the conversation. He often begins by setting out his arguments with equanimity, but winds himself up during the course of his monologue. He never loses his thread but sometimes he stumbles over his words in frustration with the madness he is confronted with.

But given that he’s spent more than 10 years campaigning for nuclear power, he must be pleased that the government has finally come out in favour? “Oh, I think we won the argument a long time ago. What we didn’t win was the courage of politicians to do what was necessary. I mean, the greens” – he never manages to utter the word without a sneer – “have no argument. It is totally contradictory. They say they’re in favour of the environment so they will industrialise our rural areas with wind turbines. They say they’re in the business of reducing carbon dioxide so they won’t touch nuclear with a bargepole. They say they’re in favour of looking after the climate, but a combination of renewables, energy conservation, CHP, where it is possible and microgeneration will not do anything, or very little, to reduce carbon dioxide. They’re away with the fairies. I’m not saying that nuclear is the solution to everything … but it is the one proven system that delivers electricity reliably, safely, economically and cleanly. The logic is irresistible.”

Hydroelectric power is the only renewable that Ingham credits with being “pretty fully developed”. Wind power is his bête noire – he doesn’t believe it is reliable, safe or economical, and he casts doubts on its cleanliness. As well as spending two or three days a week running SONE, Ingham is also vice-president of Country Guardian, a vociferous anti-turbine lobby group. He makes the startling objection that when the embodied energy in the construction and decommissioning of wind farms and nuclear power stations is taken into account, wind produces twice as much CO2 per unit of electricity generated.

He doesn’t believe that wind engineers are close to being able to transport large quantities of offshore energy, or store it. Capturing the carbon from coal-powered stations is dismissed too, as are the chances of persuading the public to use less energy – Ingham spent five years trying to do that in the seventies. “It really is a very long slog. People didn’t come on to this technological earth to be cold and inconvenienced.” The EU’s target on biofuels, announced that morning, prompts another explosion.

Indeed, Ingham is outside the consensus view that the UK should be powered by a mix of technologies. “Most people think renewables have a place, but I tend to look at them much more sceptically. If they’re going to bankrupt us, certainly not.”

His take-no-prisoners promotion of atomic energy has led some in the industry to distance themselves. “Bernard is regarded by the nuclear industry as an enthusiastic supporter,” says one engineer, “but he does tend to go over the top with his criticism of other technologies. When we’re engaging with government, it’s good to respect the advantages of other technologies rather than trying to rubbish them. He’s like your old grandad at the Christmas table – you look at him fondly but sometimes they do say some silly things.”

On the other hand, Mark Whitby, chair of engineer Rambol Whitbybird, and about as ardent an evangelist of wind power as you could hope to meet, has only warm words for Ingham. “He’s a lovely guy, drives a Mondeo. He’s one of these typically English gentlemen. Gentleman is the word for it.”

I’m not sure the feeling’s mutual. Whitby recently offered the Royal Academy of Engineers £50,000 to do an exhaustive study of the embodied energy of nuclear. Ingham says the case has long been proved. “All these people who say there’s never been an analysis of nuclear, it’s that there’s never been an analysis that serves their purpose – ie, which shows it’s uncompetitive.

I recognise they think I’m strong meat. It’s about time we had some strong meat in this business, otherwise we shall all be going to hell on a handcart

“I mean, they all say that nuclear has always been subsidised but it’s never been subsidised to the extent that wind has. To so little purpose! We really cannot go on nattering on about climate change and bankrupting ourselves, as we shall!”

Without prompting he moves on to the targets the EU has set the day before on renewable energy production. “This stupid European thing, and I really do underline the word stupid. They do not know what they’re doing because they never talk to engineers any more! I spend all my time talking to engineers, who just laugh at these politicians; they laugh at Brown and they laugh at Cameron, with a big damned turbine on his roof. Did you see those figures? Brown’s solar panels cost £16,000, and he’d get his money back after 100 years! Cameron’s I think was £3,500 and he’d get his money back on a turbine in six years. I mean, are we going BARMY?”

For all the offence he may cause, Ingham clearly feels that it is he who is under siege. Who are these mad mullahs? “Greenpeace, Friends of the Earth, Sir Jonathon PORRITT” – Ingham’s clipped contempt makes a magnificent feast of the word. “God, there’s so many of ‘em. And yet they have a quite remarkable hold over what you would have thought would be sane people.”

I tentatively suggest that the nuclear industry finds him a bit over the top. “I’m sure they do because I think they’re under the bottom! The nuclear industry is in the condition it is because of the stupidity and incompetence of the people who work for it.” He seems genuinely upset. “I have the utmost contempt for them when they criticise me. Of course they say I’m over the top, they wouldn’t stand up and defend anything.

“I recognise they think I’m strong meat. It’s about time we had some strong meat in this business, otherwise we shall all be going to hell on a handcart.” A minute later he returns to the subject: “Could I just say that I regard it as a badge of honour when people say that I’m over the top about nuclear power?”

Although Ingham never exactly seems upbeat, he does claim to be pleased with the political shift to nuclear over the past six months. He realises it will be an uphill struggle to get it through. In 1981, the Tories pledged to build five power stations, but only managed Sizewell B, and that took 15 years. What should this government do differently?

“Make it absolutely clear that they’ve got to happen, but say that there won’t be a financial subsidy. What there will be however is very considerable care and attention about licensing, about the planning system, about access to the market, about the regulatory framework. The government doesn’t have to bribe people; what it has to do is to create a framework within which they have confidence that their project will be profitable.”

Ingham is not a member of any political party and says he hasn’t decided who he will vote for next time round. But of all the parties, he believes the Conservatives “have got their feet most sanely on the ground”, though he has little time for the leadership’s infatuation with the green movement.

Suddenly he changes the subject. “Now I consider myself one of the greenest people on the planet.” How come? “Well, for one thing I’m concerned about rubbish. These environmentalists never seem to bother too much about rubbish.” What does he do about rubbish? “I try to remove it when I see it.” You pick up litter? “I don’t pick it up in the street but that which I have control over I don’t spread around.” Does he recycle? “I take my newspapers to the dump. And bottles.”

For more on the energy debate go to www.building.co.uk/sustainability