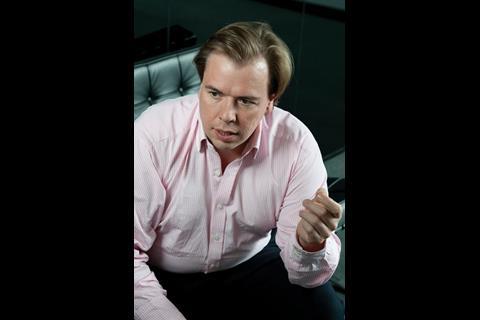 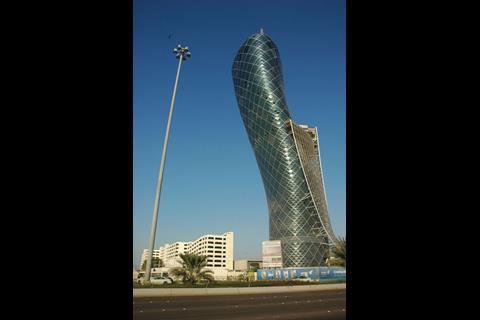 Peter Morrison, chief executive of Scotland’s best known architect, explains his hiring policies (which include Sir Fred Goodwin), and how RMJM turned itself into an international success story

An 11am coffee meeting at the Ritz Carlton in Cannes was meant to be the perfect mid-Mipim pick-me-up. Nothing like a caffeine fix at a civilised hour to aid recovery and provide a welcome break from the beer-addled crowds lining the Croissette.

If only everyone else hadn’t had the same idea. Peter Morrison, chief executive of RMJM has a 40 minute slot for this interview and five minutes in we still haven’t found anywhere to sit. “This is why I try to avoid coming down to the main conference,” he says weakly, looking out over a sea of suits weaving around each other and their precariously balanced drinks. “I have a family house in the hills in a medieval village called Mougins and it makes sense to stay there.”

Mercifully, two stools at the end of the marble bar free up before he has a chance to bolt off there, and with somewhere to sit and a Diet Coke in his hand Morrison is quickly rejuvenated. And thank goodness, because he has plenty to say.

The mood at the conference seems more upbeat this year – have you picked up on that?

I have. We’ve had a really good week and there have been plenty of opportunities to meet people this year. We are doing well in China and our real focus going forward is in eastern Asia. So we have had a lot of clients and potential clients from this part of the world up to the house for dinner and drinks.

But that doesn’t mean the pain is over. For us as a firm things are generally going well. But we’ve been more protected than some of our competitors as we are one of the most geographically diverse practices in the sector. Without our huge presence in Asia and the Middle East I have no doubt it would have been a different ball game.

Your international business is now your main revenue stream [only about 6% of RMJM’s £100m turnover comes from the UK business]. Do you have any advice for firms looking to emulate you?

We’ve just celebrated our 40th anniversary working in the Middle East and for 35 years we made a complete mess of it. There is a real danger of firms panicking and going blindly into Asia and the Middle East with no knowledge about how to operate in a different country. When we first broke into these parts of the world we didn’t understand the clients, we didn’t know how to win the right jobs, how the financial models worked or even how to get paid. Luckily we got to grips with it. But there is less leeway for people to make mistakes in a recession. UK firms will find themselves with a lot of work and think “phew, we’re keeping busy”, and then won’t get paid for a year, if they get paid at all. It’s hard enough for a 1,000-person firm to get it right and smaller practices who are doing work for nothing, then paying people nothing need to understand that this is not sustainable.

What about some more general advice for firms who have suffered in the downturn – what do you think the future holds for the industry?

What do you think that new world will look like?

A far more consolidated industry. Lots of the smaller practices, the 10-200 people firms, will disappear as they’re not diverse enough to survive. That’s why I think consolidation is next on the horizon. I believe it has become an inevitability for the sector in the same way it did for the marketing and advertising professions. It was always going to happen in architecture – the recession has just sped the process up. Practices will need to become more diverse and better protected to survive. That all leads back to consolidation.

Is that what troubled firms should consider instead of say, asking full-time part II and part III architects to work 14-hour days for around £5.70 an hour, as London practice Parritt Leng has been reported as doing?

I hadn’t heard about that. That’s terrible. The reality is that 70% of architects have lost their job in this recession and people think they can abuse that to get staff. It sends out totally the wrong message and devalues the industry. I am really quite shocked by that … but yes, that’s exactly when consolidation could be the best option.

In 2007 your father, Sir Fraser Morrison, returned to the industry to join you at RMJM as part of the management team based in the US. How do you find working alongside your dad?

It’s great. I’m really lucky I have a fantastic relationship with my father. He’s an invaluable asset to lean on. And not just in terms of the US business. He went through some very harsh recessions when he was running Morrison and having him to advise and talk to through this process has been brilliant.

Well, we’re both very impatient. Thinking about it, I would say we are similar actually. I think if you asked my mother, wife or sisters they would certainly say we are.

Is there a ban on talking about work at home and at family events?

It’s so funny you asked that as we were talking about it just last night. We were saying that the grandchildren help with that one. I have two sisters and all three of us have three kids each so dad has nine grandchildren to run around after when we all get together. That keeps him busy. If we do start to chat about work we try to keep it brief because mum and the girls get really bored.

Do you have disagreements with him when you are working together?

All the time. And I always get my own way. That’s a joke by the way. I absolutely don’t!

Do you call him dad at work?

Yeah, of course. What else would I call him?

I couldn’t call him Fraser. That would be weird.

Your appointment of [former RBS chief executive] Sir Fred Goodwin as an adviser on your international expansion plans in January really put the cat among the pigeons.

Yes – that made for one or two headlines didn’t it …

He is an old family friend, so was him joining you a plan that had been in the pipeline for a while?

Fred has always been familiar with what we were doing. Then, obviously, the opportunity for him to do something a bit different came up and that’s how he ended up coming on board. There was an element of inevitability to it, given the issues over the past year. You’ve got this very experienced guy who knows about running an international business coming on board as an adviser. He can help us to look at markets differently all around the world, to help us understand them better. It certainly generates enough conversation. People ask us about it all the time.

You must have known the announcement was going to provoke a strong reaction though.

I don’t agree with any of the criticism of him. The reaction in the UK to the appointment has been mixed but our UK business makes up less that 10% of our revenue and the reaction to the news was very different everywhere else in the world. He is very well respected in Asia and the Middle East.

Was he bothered by the backlash or did he remain pretty relaxed about it all?

Yeah, he didn’t let it get to him. I think he just enjoys what he is doing. He understands Asia and the Middle East so well and our whole model is built on having clever, international, experienced people surrounding us to allow the architects to do what they do best in the most secure environment possible.

Talking of secure environments, the exact opposite is now looking true of the Ritz Carlton. Over the past 30 minutes the lobby and restaurant areas have got so packed that there is a queue three people deep at the bar and huddles of table vultures lurk around the existing drinkers and diners, waiting to pounce. Morrison is now running late and hastily starts to make his exit. Before he has had a chance to collect his two phones and hands-free kit, at least five delegates shuffle forward to claim his seat. The smell of alcohol hangs heavy in the air as the champagne brunch brigade have now arrived in force and the sound of clattering cutlery against a backdrop of 100 conversations and the whirr of the coffee machine has reached deafening levels. That family house up in the hills must never have looked so good…

Which architects do you most admire?
I am a huge fan of Frank Gehry. I know him well and love his buildings. I also love Jean Nouvel and Richard Rogers.

What do you think you would be doing if you weren’t in the job you are now?
I did a law degree after school and then went into the British Army for three years. But I can tell you what I always aspired to do – become a film director. When I was 25 I went to the New York City film academy and I had such a great time. I loved it. It’s still something I aspire to do actually. One day perhaps.

What’s your favourite city?
It’s between Paris and New York. Paris is special because I met my wife there. She was a very good friend of my sister’s – she’s useful, my sister. They were at university together and ended up going to Paris for their year out where they shared a flat. I had just started in the army and went to visit for a few days and that’s when we met. And I spend a lot of time in New York and love it because it is one of the most vibrant cities in the world.

What do you never leave the house without?
[Gaze fixes sheepishly on his collection of mobiles and
hands-free kit on the marble bar to his left.] If I leave the house without them it’s a major drama. I have sent people back to my house or office to collect my BlackBerry in the past, even if it is an hour-long journey away. I am fiercely addicted to it. I have to wean myself off when I go on holiday. After a few days without it, I am usually sneaking a little look, checking a couple of
emails …

Morrison, 36, joined RMJM in 2003 from a corporate finance background and became chief executive in 2006, with the group having just made a £1.3m loss.

He quickly set about developing the group’s international presence and, by 2008, some 90% of work came from overseas. The effects of this can be seen in its most recent annual results, for the year to April 2008. Turnover grew to just under £100m, a 111% increase on the year before, and pre-tax profit rose doubled to £7.9m. Staff numbers had grown from just under 700 in 2007 to 1,125 by the end of
2008, making RMJM the 11th largest architect in the UK.

Projects RMJM is currently working on include the Commonwealth Games athletes’ village in Glasgow, the $2.6bn Okhta business centre in St Petersburg, the Zliten campus of Al Asmariya University in Libya, and the $1bn Varyap Meridian mixed-use development in Istanbul.