The rise of the ‘slimby’ ushers in a more positive era and we enjoy seeing the mag in pride of place, while one firm attempts to mitigate the effects of a no-deal Brexit and a duathlon raises cash for dementia research

Some kind of wonderful

We’ve all heard of the “nimby” – not in my backyard – but I’m pleased to hear there are more positive acronyms doing the rounds. Speaking at the launch of a new report by the Institution of Civil Engineers on how infrastructure investment can unlock new homes, Victoria Hills, chief executive of the Royal Town Planning Institute, spoke of the “slimby” – a person who likes the idea of “something lovely” in their backyard” – and the “swimby” a person who longs for “something “wonderful in their backyard”. The government’s Building Better, Building Beautiful commission should take note.

Window to the world

Two of my hacks were taking a lunchtime stroll around trendy Shoreditch near Building’s HQ earlier this week when something in an office window caught their eye. The pair were tickled pink to see a local architecture practice proudly displaying several of the most recent issues of Building on a table in the firm’s front window. So cheers to that!

Chatting to one of my colleagues last week about his company’s annual results, Galliford Try construction boss Bill Hocking talked through the contractor’s efforts to mitigate the effect of a possible no-deal Brexit. The list was certainly extensive, but Bill noted there were “plenty of ways to skin a cat”. I have to confess that is a phrase I haven’t heard in decades.

Last week, the CITB sent out a press release announcing it was “embarking on its biggest ever consultation”, to get UK construction’s views of more than 1,000 qualifications. What the top line failed to mention is what the organisation is actually currently doing is asking for firms to reveal how they would like to be consulted. Consulting on how to run a consultation… Who said the CITB had too much time on its hands?

How to spur them on

I was interested to see the 2019 London Infrastructure summit was being held at Spurs’ stadium in north London last week. An interesting day was had by all, apparently, but it seems the sessions ran rather behind schedule. Still, given the delays that bedevilled construction work on the scheme, it seemed rather appropriate …

Staying with the summit, in her introductory address Spurs’ executive director Donna-Maria Cullen apologised to Crossrail for “hijacking the capital’s electricians, technicians and engineers”. It seems we now know who to really blame for the line falling behind schedule.

The team at Alinea have been busy of late, with 30 of the firm’s finest recently taking part in the London Duathlon to support Dementia UK, which saw teams of three take part in a relay with each person running 10km, cycling 44km or running 5km. While I’m not sure there were any world records under threat, I’d like to congratulate the team on a good effort for a great cause. 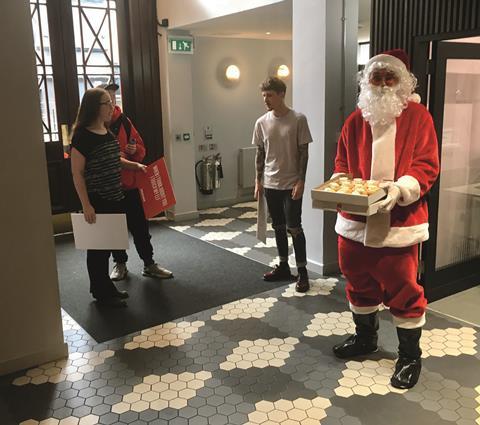 I doughnut believe it

My colleagues are used to seeing some pretty wacky things in Shoreditch, but as we bid farewell to summer surely there will be no stranger sight at this time of year than having Father Christmas pop into Building Towers to hand out doughnuts. The seasonal stunt was to promote Bounce, a chain of table-tennis outlets. Santa’s tasty treats were speedily snapped up, but I won’t be picking up a ping-pong paddle anytime soon.