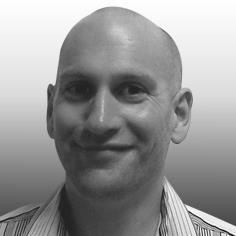 In my most recent blog for Building I discussed the widespread electrification of our cities. At WSP we have spent the autumn considering what an all-electric city means (where all heating and vehicular transport is electric) in practice.

We looked at three areas where an all-electric city could have a significant impact: carbon emissions, air quality and noise pollution – taking statistics available for London as our guinea pig. The results are startling.

We found that if we heated all our homes and offices with electricity, and all drove electric vehicles (including buses and taxis) that we would reduce carbon emissions by 80%. 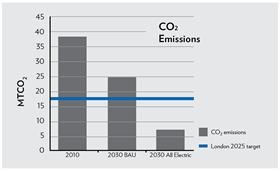 How? The electricity we get from the National Grid is going to continue to be less carbon intensive over the coming decades as the UK pursues a policy of ‘decarbonisation’. This means carbon emissions are going to fall anyway in London (if the GLA meets its own projections!). However, if we sped up the process by switching completely to electric heating and transport then carbon emissions will be cut to just a third of the business this usual scenario (BAU) by 2030. This will reduce London’s carbon emissions by the same amount as emitted by Birmingham, Manchester, Glasgow and Leeds combined today

There are two main types of air pollution that are currently harming Londoners: nitrogen oxides (NOx), which are a lung irritant with long term consequences, particularly for asthmatics, and particulates (i.e. dust).

Our research comparing London in 2030 with current projections showed a dramatic fall in both. In particular we see a 37% reduction in nitrogen dioxide levels in our all-electric city (see graph below).

Particulates actually reduce by much less overall. However, adjacent to roads where people are close to vehicles such as at Oxford Circus levels would drop by 20%. To think this is possible whilst the UK faces being fined because we can’t meet 2010 targets for air quality does question how serious we are about this when more than 4,000 people die in London each year due to air pollution.

Instead of modelling the entire city we measured the noise of an electric bus and current diesel bus as they passed at low speed. As you would expect the electric bus was much quieter. Extrapolating this for taxis, lorries, cars and buses is difficult but the impact remains significant. The result would be less disturbed sleep, better public spaces, and potential positive knock-on health effects.

How do we become all-electric?

Our conclusion from our research was that London, and any other city that goes all-electric, will be a healthier, happier city that will be able to continue to attract the world for work and play.

Clearly a lot needs to be done to make this happen and there are many challenges. We will need more efficient buildings, whilst others will have to be retro-fitted with electric heating. We will also need a system that will quickly and affordably allow most Londoners access to electric vehicles and their charging points.

Taking these issues into account our main suggestions are:

Our research shows what can be achieved by 2030, but to take into account the changes that need to be made we have set what we think is a reasonable target of 2035. In this time almost everyone will have replaced their heating system or mode of transport. We want everyone to choose electricity, and we need authorities to enable this to happen.

Since we released the paper the response has been positive and people have rightly pointed out the hurdles we will need to overcome. I think the all-electric city is not only a possibility, it will definitely happen in our lifetime. My conclusion is, why wait?

Barny Evans is principal consultant, renenwables and energy efficiency, at WSP. His full report can be read here.