The housing sector gets a dressing-down on The Archers, the leader of the Lib Dems unsettles the RIBA and Interserve skirts around the issue of a major loss. Well, they say there’s no such thing as bad publicity …

I was delighted to learn that HS2 plans to build a “green corridor” featuring 7 million trees along the first phase of the train route from London to Birmingham. As well as the trees, there will be fauna-friendly things such as bat houses and more than 200 ponds for great crested newts and other amphibians. All good stuff, but I couldn’t help wondering why HS2 thinks trees near the line are going to be a good thing when Network Rail plans to fell a similar number in order to save commuters from the annual hell that is “leaves on the line”.

Interesting that Interserve has brought in Nick Pollard as a non-exec. The former Balfour Beatty man is in charge of Cory Riverside Energy, which, according to Interserve, “generates renewable baseload electricity from London’s residual waste”. Cory says something slightly different. “We operate the largest energy-from-waste facility in the UK,” the blurb on its website reads. Given the £200m-plus it has lost on its foray into energy-from-waste, perhaps it’s understandable that Interserve has decided to underplay what Cory does.

Now, I’m no Archers fan, but I did happen to catch a snippet of the Sunday omnibus edition on Radio 4 and was taken aback by one of the storylines. One expects intrigue at the flower and produce show or a bust-up in the Ambridge cricket team, but Pat Archer tearing a strip off the local developer for reneging on a social housing pledge – well, it’s verging on being a topic relevant to the under-40s. I especially liked the detailed explanation from private equity boss Justin Elliott that “increasing cost of labour, materials and the level of infrastructure” had squeezed his profit margins. No, Pat didn’t buy that excuse either, so it’s shaping up into a good old village spat. Who’ll win the day? Evil profiteering businessman or much loved local do-gooder? Tune into the next omnibus to find out.

I suspect Vince Cable would side with Pat Archer in any fictional social housing-related, Ambridge-based fist fight. A colleague attended the official launch of the Lib Dem leader’s new housing policy at the RIBA last week, where he slammed the developer-led model and the planning system for failing to provide enough affordable housing. But before outlining his policy fix he briefly reminisced about his early political career as a Glasgow city councillor in the 1970s, when he said the UK managed to build some 375,000 homes a year. Unfortunately, he admitted: “Some of them weren’t great, I have to say. Some of the ones I signed off on, like Red Road, have subsequently had to be blown up.” Perhaps aware this wasn’t the sort of thing his audience at the RIBA might think was a good thing, he sought to reassure them by adding: “The vast majority of them have survived and become perfectly good dwellings.”

Speaking of fist fights, tempers were frayed at the final session last week of Negroni Talks, a series of debates for the London Festival of Architecture held at Hackney’s trendy Ombra bar. The subject was architecture’s future after Brexit, with passionate speeches from people on both sides of the vote and contributions from the floor. Irish architect and academic Kevin Rowbotham struck a particularly depressed note, shouting: “The world is fucked and you are wondering whether investment will continue?” As the evening wore on, his outbursts continued, prompting the MC to declare testily: “If I were a judge, you would be taken down.” My scribe tells me Rowbotham replied that he was more circus master than judge. Better than circus clown, I suppose. 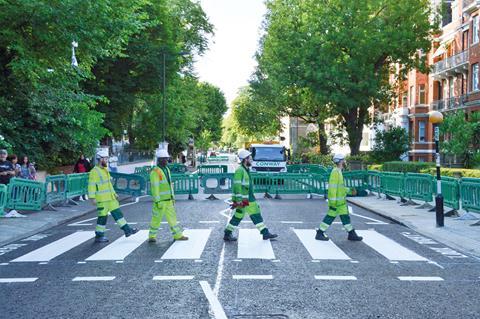 Don’t let me down

Workers from road maintenance contractor FM Conway have “Come Together” to be pictured on the Abbey Road crossing in London made famous by the Beatles album of the same name. Why? Well, because as part of the firm’s deal with Westminster council it was required to resurface the road and repaint the zebra crossing featured on the album cover. Let’s hope its deal with the council is a good one and means the contractor doesn’t have to tell it that “You Never Give Me Your Money” and that it has to “Carry That Weight” as a result. The End