For Amy Bunszel, the advent of the Zoom era sparked an unexpected change in the workplace – suddenly it was not quite so hard to be heard.

“It was interesting,” she told Building. “Zoom created a nice level playing field. Everyone was in a box, you could raise your hand and you would have your turn to speak.”

Bunszel has worked in construction and engineering – both fields which have suffered from a stubborn gender imbalance – for more than 20 years and knows what it is like to have to fight to be heard. 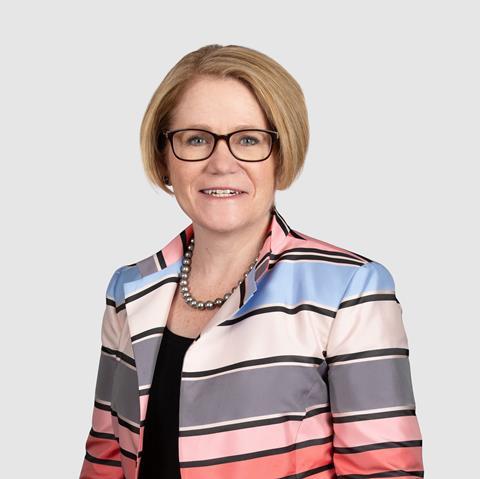 “I know early in my career I didn’t always feel like I was being heard or that I could get a word in,” she said. “I think there are ways for us, digitally and in person, to support an inclusive environment where everybody can feel heard.”

As Autodesk’s executive vice president of architecture, engineering and construction (AEC) design, Bunszel believes that modernising the technologies used in the built environment could play a major part in modernising its workforce.

Construction is the least digitised industry, apart from something like farming. But it doesn’t mean they’re not smart and interested

Construction has been slow to adopt digitisation and Bunszel said that Autodesk was still often competing with pen and paper in the industry.

She said: “Construction is the least digitised industry, apart from something like farming. But it doesn’t mean they’re not smart and interested, it just hasn’t been a priority until recently.

“So we’re seeing pretty fast adoption of these tools and it is translating into business impacts that help them reduce waste and increase safety.”

She said that wider adoption of these technologies offered a double solution for construction’s labour shortage – creating efficiencies that mean less labour is required and creating improvements in safety and social value that will make entering the industry appealing for a larger and more diverse crowd.

“I think that also works even with just age, thinking about getting younger people into the industry,” said Bunszel. “If you go to someone and you go,  ‘Here’s your iPad, you can go to the job site and tag things on the iPad’, that’s a very different situation than, ‘Here’s a stack of drawings, they’re probably out of date, good luck with that’.

“I think that the more modern ways of working are more appealing to many different demographics”.

One of the claimed benefits of these digital tools is their ability to help firms achieve net zero goals by reducing the amount of wasted product, and addressing such important social issues as climate change can also be a major part of attracting a broader range of talent, according to Bunszel.

“Leaning into purpose and impact is another way to attract a different set of people to AEC industry, where it’s not just how you are building things, but the overall impact of the thing you are building on the world,” she said.

As the industry has got more digital, it has created more opportunities for people with different skill sets

Bunszel, whose background is in electrical engineering, began her career in aerospace before co-founding Linius Technologies in 1996. The company, which delivered wire harness design software, was acquired in 2003 by Autodesk, with Bunszel moving into the firm’s manufacturing division and eventually taking over the AutoCAD division. Much has changed over this period, but she said that she was “still the only woman in the room many times”.

Bunszel said the digitisation of the industry was helping to begin to shift the dial on that front. “I have seen a distinct change in seeing more women in leadership roles,” she said, noting that she often saw women in BIM manager roles. “I think as the industry has got more digital, it has created more opportunities for people with different skill sets,” she added.

Ultimately though, companies which want to promote diversity have to take action at the top. Bunszel said: “I think one of the challenges that happens in your early career is,  when you’re looking around the company, if you don’t see people who look like you in higher ranks in the company, you may question your ability to be successful there.”

If you want a more diverse workforce, you are going to have to think a little differently

Beyond utilising the kinds of digital tools that Autodesk offers, Bunszel said there were a number of things companies could do to attract a more diverse workforce, including working on development plans for new hires and not applying such restrictive criteria to job applications.

“If you want a more diverse workforce you are going to have to think a little differently about some of those requirements and maybe invest more in training when people arrive at your company,” said Bunszel.

She also noted that Autodesk and some of its clients had introduced resources groups – a women’s network, an Asian network, a black network – where “like-minded people get together and support each other”.

Bunszel said she herself always tries to view herself as a role model, taking interviews and mentoring other women in the industry. “I want to be able to bring people along with me – encourage them that it is possible, even though there aren’t maybe a lot of us,” she said.

This interview has been published on International Women in Engineering Day, more information can be found on social media using #INWED22