Developer says it has committed to build an extra 100,000 sq ft of schemes in its pipeline 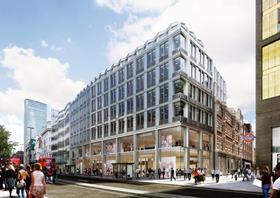 Great Portland Estates has added committed to build an extra 100,000ft2 of schemes in its West End development pipeline.

In an interim management statement this morning, GPE confirmed that its committed schemes now amounted to five West End projects totalling 600,000ft2, with new additions including an 89,700ft2 new-build development at 73/89 Oxford Street (pictured) - opposite the Dean Street entrance to the Tottenham Court Road Crossrail station. The office and retail scheme has been designed by Lifschutz Davidson Sandilands and is due to complete in 2017.

The developer also revealed that the value of its portfolio had increased 19.9% over the past 12 months, on the back of rising rental and capital values.

The statement added that good progress was being made across six near-term schemes, totalling 500,000ft2. These schemes, which include a 207,200ft2 development in Hanover Square for which it has submitted a revised planning application, all have potential starts in the next 18 months.

A further 12 uncommitted schemes have added 1.1 million ft2 to GPE’s development pipeline, bringing the total programme to 2.2 million ft2, covering 51% of the existing portfolio. Of this, 46% has planning permission.