A care in the world

Architype’s £9.6m overhaul of St Michael’s Hospice in Herefordshire is a nuanced balance between the residential and institutional functions of the building, providing both flexibility and interactivity for the live-in patients 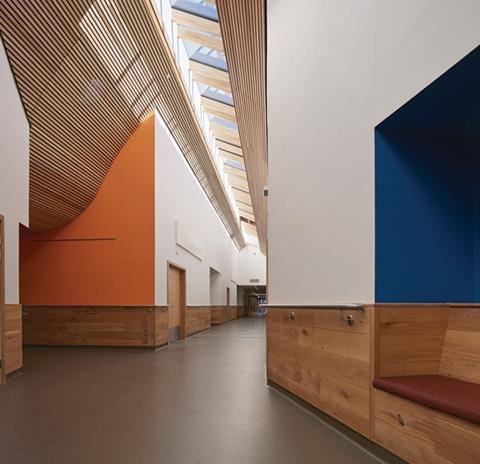 For those fortunate enough to have not yet had cause to encounter one, hospices are one of those rare building types that are still considered taboo. Yet, as our population ages, these unique institutions may play an increasingly significant role within our clinical and social infrastructure.

Many of our hospices are a result of a major expansion of stock that took place in the eighties. But the fabric of many of these buildings is now deteriorating and more importantly, they are becoming increasingly incompatible with modern trends in the care of older people and recent advancements in palliative care.

The HAPPI reports (Housing our Ageing Population Panel for Innovation) of 2009 and 2012 have done much to raise design standards within housing for older people and while hospices are a highly specialised form of residential accommodation, it was inconceivable that they would not eventually be affected by the wholesale design re-evaluation taking place across the wider older people housing sector. Moreover, the proliferation of purpose-built and highly publicised Maggie’s Centres across England over the past decade has revolutionised the design principles, opportunities and expectations that are now associated with palliative care.

Which is why perhaps that it was only a matter of time before a truly pioneering and innovative new hospice was completed. St Michael’s Hospice is located in Bartestree, a picturesque village in rural Herefordshire located four miles east of Hereford. The hospice is an independent charity that has been offering free palliative care to the county residents since it was built in the eighties but the facility has now undergone a radical transformation. 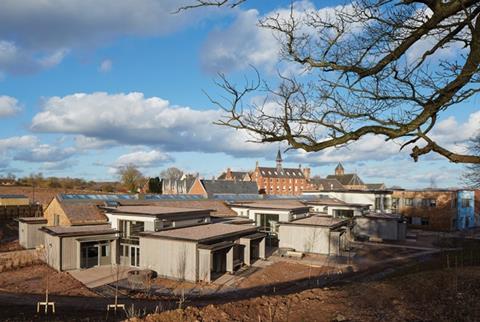 The facility is located in rural Herefordshire (Dennis Gilbert / View)

Architype Architects has just completed a £9.6m overhaul of the hospice that takes a completely fresh approach to the care of patients and staff within the traditional hospice model. The project incorporates two phases; the first has recently opened and includes a major new in-patient wing for up to 20 live-in patients.

The second involves the refurbishment of the existing building into a day-care unit which is scheduled to be completed at the end of this year. Both blocks are connected and the new entrance foyer will also eventually provide access to the refurbished day-care unit.

But it is the new-build element that is the focus for what project architect Mark Barry describes as a “pioneering facility that pushes the boundaries of healthcare design and improves the ability to care for patients in a comfortable and efficient residential environment”.

So what exactly makes this hospice different? Arguably the most significant innovation becomes evident when looking at a plan (see right). The new building is primarily single-storey with a two-storey entrance wing providing staff and administrative accommodation on the first floor. A long, double-height circulation corridor nicknamed the “street” extends from this entrance wing and has patient accommodation located on either side. 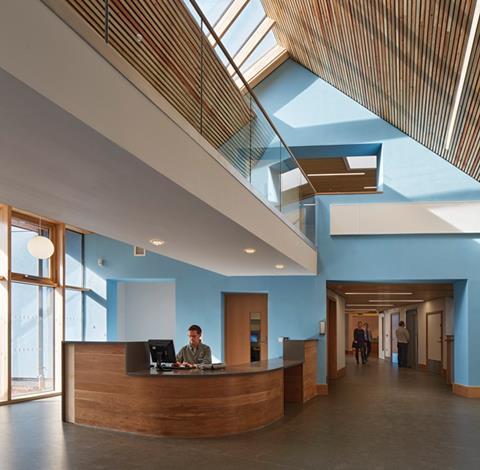 What is interesting is the way this accommodation is laid out. Beds are not arranged within wards as one might expect; instead, patients have en-suite bedrooms arranged in five identical clusters of four bedrooms and a central lobby located on either side of the “street”.

The cluster arrangement was developed through the rigorous staff and patient consultation process that took place at the start of the project which led to some surprising conclusions, as Barry explains: “The old hospice adopted a multi-bed ward configuration with up to four patients sharing one bathroom. Naturally we assumed that patients would want greater privacy but it actually turned out that that wasn’t quite the case. They didn’t want to be in an isolated box. What they preferred was private space but with the opportunity for social interaction with other patients too.”

It is for this reason that the bedrooms within each cluster are arranged around a central lobby. The walls between the lobbies and the bedrooms themselves are treated as large glazed panels with blinds which can be drawn when privacy requires. The glazing allows bedrooms to be observed by staff in the central lobby but crucially, it also allows visual connection between patients in different rooms. 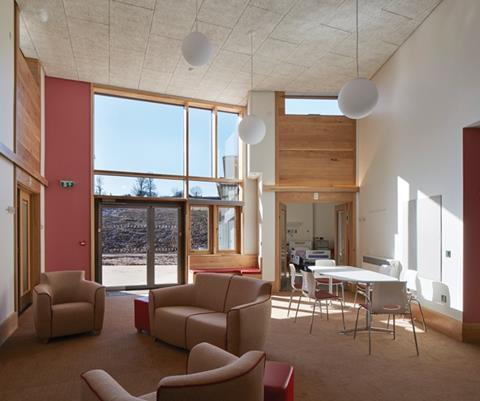 The lobbies themselves are lofty, broad spaces with direct access to the landscaped gardens that surround the hospice. They are generously lit by daylight admitted from the garden patio doors and from skylights above. In fact, their sense of bright spaciousness is one of the reasons the cluster arrangement works so well, they eloquently demonstrate the nuanced balance between an institutional and residential environment that characterises the entire project.

For Barry, they also provide the flexibility and interactivity that is crucial to the more responsive model of hospice the design team is trying to promote. “It’s not just people’s privacy needs that may change over the length of illness but their clinical, drug cycle regimen too. The clusters provide the flexibility to ensure that the social environment can respond to these changes.”

The idea of a central “street” or “hub” is not necessarily new to healthcare or residential design but it is treated with particular prominence here. Early iterations of the plan featured two wings linked by a single-sided corridor that was open to a courtyard for daylight. The final double-sided configuration as built was deemed more efficient but naturally lost the opportunity for daylight being admitted from one side.

The solution is a wide strip of skylights cut into the street’s roof, bathing the space below in daylight. The street also subtly establishes a hierarchy of intimacy that enables the transition from public circulation to private bedroom, another architectural manifestation of the hospice’s balance between residential and institutional character.

Barry, who reveals personal experience of hospice care with a close relative, describes the transition between public and private space in hospices as often being “emotionally charged” and poignantly describes the curved ceiling at this point as the building giving users “a bit of a cuddle”. Cleverly, the curve also conceals services, ensuring that the visual character of the street is uninterrupted by mechanical obstructions. 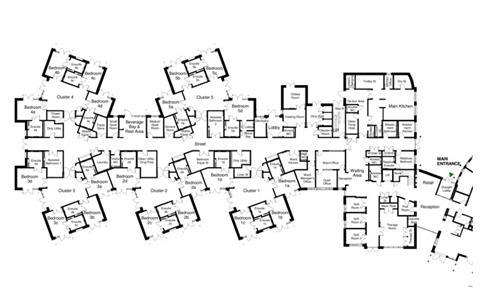 The manner in which the street’s curving ceiling is finished is also significant. It is lined with softwood timber battens, just one example of the copious amount of natural materials used across the entire building and another instance of the hospice’s pioneering ambitions, as Barry explains.

“Regulations for institutional buildings such as this can be quite strict in their requirement for durable and robust materials like vinyl or resin. However, we wanted the building to have a more natural, intimate feel which we felt would not only help with its energy performance but would provide the kind of healthy environment that would be beneficial to the patients.”

Accordingly, a prodigious array of natural materials is deployed throughout the building. As well as the softwood battens in the street, there are multiple examples of rubber flooring, recycled wood panelling and engraved oak finishes and fixtures. While regulations insist that timber is not used in bedroom or clinical areas, the design was able to ensure that timber canopies were installed on the exterior of the patio doors that connect each bedroom to the surrounding gardens.

The landscape that surrounds the building is another powerful component in the hospice’s natural materials and design strategy. The hospice is surrounded by stunning Herefordshire countryside and as well as the large expanses of glazing present in bedroom and public areas, throughout the building every opportunity is taken to ensure that windows not only let in daylight but frame as many views of the scenic surrounding panoramas as possible. These visual connections present obvious benefits for the health and quality of internal space that patients enjoy.

But the gardens that have been landscaped around the hospice provide an even more direct example of this naturalistic engagement. They have been designed to be as active and animated as possible with swales, water features, rookeries and fountains providing a tranquil and idyllic enclave that corresponds with the healing methodologies employed within the building. External materials again contribute to this natural design strategy with the envelope of the building clad in Douglas Fir panels, strips of untreated softwood timber and surrounded by local, natural stone paving.